Fans are convinced that OG ‘Grey’s Anatomy’ star Ellen Pompeo has hinted at former cast member Katherine Heigl’s return to the show, amid her drama with Isaiah Washington.

Ellen Pompeo has taken a trip down memory lane, sharing a GIF of her Grey’s Anatomy character Meredith talking to Katherine Heigl‘s character Izzie in the show’s early seasons. The 51-year-old took to Twitter on November 19, ahead of the latest episode, posting a GIF of Izzie telling Meredith, “Dude, she went all cage fight on you.” She captioned the post, “Hey it’s Grey’s day!!!” and fans think she’s sending a subtle message about Izzie coming back onto our screens.

“COMEBACK IZZIE STEVENS,” one fan replied, while another asked, “is this a hint izzie’s coming back?” Ellen’s tweet came three days after former cast mate Isaiah Washington, 57, reignited his longtime feud with Katherine, more than a decade after he was fired from the show. The actor portrayed Preston Burke on the ABC medical series, and was booted in 2006 after using a homophobic slur directed at his co-star T.R. Knight. He took to Twitter on November 16, dubbing Katherine “the first Karen” after she spoke out in the wake of his firing. “This woman once proclaimed that I should ‘never’ be allowed to speak publicly again,” he wrote. “The world agreed with her proclamation back then and protested for my job and my head in 65 languages. I wish I was on Twitter in 2007, because I will NEVER stop exercising my free speech.” 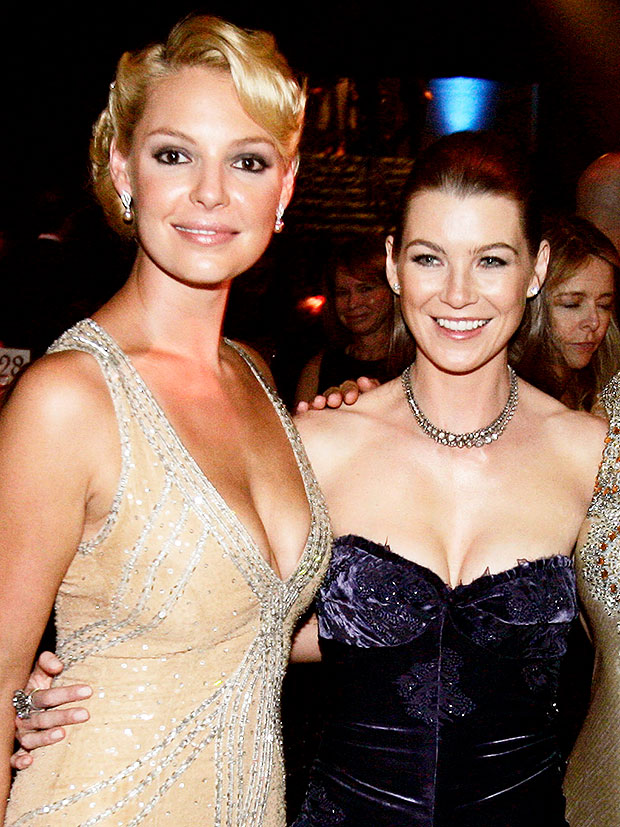 Back in 2007, she criticized Isaiah while speaking to Access Hollywood. “I’m going to be really honest right now, he needs to just not speak in public. Period,” she said. “I’m sorry, that did not need to be said, I’m not okay with it. I just feel like this is something that should be very much in-house we need to deal with… T.R. is my best friend. I will throw down for that kid.” Drama aside, Katherine has also been in the news as fans of Grey’s are theorizing that she’s set to return to the medical drama this season. It wouldn’t make her the first OG cast member to boomerang back to the show: Patrick Demsey‘s Derek is making guest appearances this season.