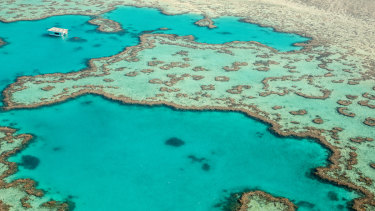 The ban, which comes into force on September 30, cancels fishing for export in the East Coast Inshore Fin Fishery – extending from the NSW border along the Barrier Reef to the top of Cape York – where gill nets are used to target several species of shark, black jewfish and mullet.

The Australian Marine Conservation Society and WWF Australia have campaigned against the fishery, arguing it did not have the promised sustainable fisheries strategy, which was due in January.

Ms Ley said the strategy was a key condition of a deal struck between the federal and state government in 2018 to licence the export fishery's international wildlife trade rights.

"It is deeply disappointing that the reforms underpinning these conditions have stalled and momentum has been lost in progress towards sustainable management of this fishery," Ms Ley said in her letter to Mr Furner.

The fisheries strategy was intended to keep track of the catch and other fishing activities. Currently, authorities do not have detailed records of which shark species are being caught where and in what volume. It would also improve monitoring of by-catch – the unwanted marine life trapped in nets – which can damage a range of sensitive species such as dugongs, sawfish, dolphins, turtles and whales.

"I can't say I am entirely comfortable with sharks being killed for fins and black jewfish being targeted because their swim bladders are somehow attractive in making cosmetics or they are seen as an aphrodisiac in Chinese medicine," Ms Ley told this masthead.

"At the very least, it needs to be done in a way that complies with the same sustainability conditions that Queensland negotiated to secure the World Trade Organisation licence."

The Queensland government is considering its response.

"The Queensland government has taken significant steps to ensure the state maintains a sustainable commercial and recreational fishing industry for generations to come," Mr Furner said. "This has included passing the most significant fisheries reform legislation in decades and working through extensive consultations with all facets of the industry over the last five years."

The society's fisheries campaigner, Tooni Mahto, said it was the "first time that we are aware of that a minister has been satisfied a condition on the export accreditation has been contravened and revoked export approval for any fishery in Australia".

"The gillnet fishery is tarnished by poor practices including the dumping of thousands of endangered hammerhead sharks, illegal shark finning and the by-catch of dugongs and snubfin dolphins in gillnets, all in the supposed sanctuary of the Great Barrier Reef."

Our weekly newsletter will deliver expert analysis of the race to the White House from our US correspondent Matthew Knott. Coming soon. Sign up now for the Herald‘s newsletter here, The Age‘s here, Brisbane Times‘ here and WAtoday‘s here.