Good news for introverts: networking, pressing the flesh, schmoozing – call it what you will – is not as effective as it’s been made out to be. In fact, it might be a complete waste of time. So says Scott Gerber, co-author of Stop Networking and Start Building Business Relationships That Matter.

Gerber, who is also the CEO of a Boston business development company, believes our professional circles should be small and strong, writing in the Harvard Business Review that, rather than reaching out to old acquaintances or trying to invite that person we saw once in an elevator to join our professional network on LinkedIn, we should be much more focused on shrinking our circle to a few well chosen folks. 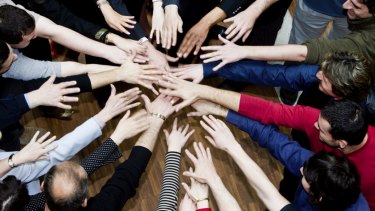 Turns out a small, tightly curated group is more helpful than trying to get to know everyone.Credit:istock

According to Gerber, we’re all operating out of the erroneous belief that “the more people we know, the greater our chances of being exposed to opportunities that may lead to professional advancement”. When, really, that’s about as effective as watering your entire garden with a bucket of water.

“It’s about surrounding yourself with a carefully curated group of people who you admire and respect and with whom you share common beliefs and values – people who will set the tone for the foundation of your larger network. And that core group should be a lot smaller than you think.”

Your core group should be made up of five members, maximum. If they’re functional people, they will all have their core groups, and because you all share the same sort of values, they’ll be able to hook you up with opportunities that actually suit. These people are smart, they’re kind – they get you.

It’s welcome news for anyone who hates conferences, launches, events and anything else with an unhealthy mix of champagne and power point.

It’s certainly welcome news for anyone who hates conferences, launches, events and anything else with an unhealthy mix of champagne and powerpoint presentations. It also means the next time you press delete on that LinkedIn invite from Melanie, who you met once at your cousin’s hen’s night, you can do so with confidence. Melanie is not your people.

But might it also have implications for the other facets of our lives? Friendship, for example. According to a study of 2000 people by Cornell University in 2011, the majority of adults have just two friends. This is a drop from the one undertaken in 1985, which found people had three friends.

Researchers said selectivity was the reason for the drop – not social media, which didn’t really effect close relationships. Another study, undertaken in 2017, found that just over 60 per cent of people had between two and five friends. But one thing remained consistent in each study: friends meet friends through other friends. Isn’t this the same “core” networking theory at work?

“I am a big believer in strategically growing a quality network,” says Lucy Bingle, a marketer and business strategist at LinkedIn. “A scatter-gun approach doesn't achieve anything other than numbers. You may end up with a very large network but it won't be relevant.”

Could Lucy’s approach to networking also apply to romantic relationships? Single women in particular are advised to greet every romantic overture with enthusiasm, and to jump at every opportunity, lest they “miss out on love”. But what if, in practicing this, the connections made are with those who are unsuitable at best, and at worst, damaging?

“Let’s be clear,” writes Jenna Birch asking why it is so hard to turn a Tinder date into a relationship in the Washington Post. “There are benefits to dating online.” Not least, she adds, because of the sheer volume of choices. However, when you share the same social network, you’re more likely to commit, just because knowing all the same people will make the breakup – or the ghosting – that much more painful for everyone.

But not everyone is as fortunate as Meghan and Harry and can be set up by a mutual friend. The way around this, according to Birch, might be to introduce your date to your friends early in the relationship.

But whatever the context – work, friendship or romance – the maxim remains the same: tighter circles, with more authentic connections are highly advantageous. As Art Markham, a psychology professor at the University of Texas told Birch, “Information flows freely among people who are strongly connected to each other.”

So the next time you tell yourself, “I really should get out there” – don’t worry, you shouldn't.

Everything You Need to Know About Jena Frumes, the Vine-Star-Turned-TikTok Celebrity
TV & Movies