NSW Premier Gladys Berejiklian says the Uluru Statement from the Heart will remain the centrepiece for any true form of recognition and believes there is a growing mood for change among the community.

Ms Berejiklian has backed a federal Coalition government to deliver constitutional recognition reminding colleagues on Monday that all but one of the nation’s successful referenda had been proposed by Liberal leaders. 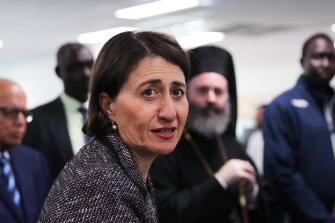 Premier Gladys Berejiklian has thrown her support behind enshrining a First Nations ‘Voice’ into the constitution.Credit:Janie Barrett

She said the Uluru statement, which won the Sydney Peace Prize 2021 last month, suggested that a First Nations ‘Voice’ be enshrined into the constitution and that a Makarrata process be introduced in order to interrogate treaty-making and truth-telling.

Ms Berejiklian said the statement was “the centrepiece of reconciliation” and “a vehicle both to address Indigenous recognition and to make our nation better”.

“This is an issue all of us should be united on,” she said at an event at Berkelouw Books in Sydney. “This is crucial when many of the proposed reforms today require constitutional change and a vote by referendum. We know that the heart of liberalism is that every individual, irrespective of their background, should have the opportunity to be their best and reach their full potential.”

She said there was a “growing mood for change on the issue of reconciliation” and recent events showed it could be achieved.

“Australians comfortably adopted the recent word change to the national anthem and we are engaging in discussions we never ever had before,” Ms Berejiklian said.

The statement, developed at a meeting of more than 200 Aboriginal and Torres Strait Islander leaders, was published in May 2017.

The federal government has promised to legislate a Voice to Parliament, having released an interim report on the co-design process in January this year. But it has all but killed off staging a separate vote on constitutional recognition and, despite being a Coalition policy at every election since 2007, it remains a divisive topic within the party room.

Federal Minister for Indigenous Australians, Ken Wyatt, said last month the mood of the nation towards achieving reconciliation had changed significantly since he entered Federal Parliament, and he believed Australia was ready to constructively debate the issue.

Ms Berejiklian said while there was still much to do she believed Senator Bragg’s book, which urges his colleagues to join a campaign for the federal government to enshrine an Indigenous Voice to Parliament in the constitution via a referendum in the next term of parliament, was a “statement of hope and a search for common ground in the future”.

“Leadership isn’t necessarily about having a title, it’s about having the courage and conviction to make change,” she said.

Senator Bragg told the Sydney Institute on Tuesday the Coalition party room is becoming more supportive of change, particularly among the new generation of parliamentarians.

He has proposed a minimalist amendment which he believes the Australian people will support which obliges the Commonwealth to ensure that Indigenous peoples are heard.

“I do not believe that the Australian people will support an amendment to the constitution, however, that is highly complex and explicitly creates a new entity in the constitution,” he said.

Acknowledging the likely push back from colleagues about the proposal, Senator Bragg said “putting an obligation on the Commonwealth to consult doesn’t give a special deal to a minority, it provides a duty to consult which should have been there at the outset”.

He argued the Liberal Party needs to lead this debate because the “party of patriots should … drive this agenda because it is a patriotic agenda”.

“We cannot change the past but we need to make sure that the restlessness in Australia is concluded by delivering a national reconciliation worthy of a great nation.”