Art collector and patron Gene Sherman had a long-standing policy when running her commercial contemporary gallery in Paddington – never to view work by drop-in artists. Set times were allocated for unsolicited portfolios.

On a whim, she paused for three Chinese artists who trudged the gallery stairs with their portfolios. “The rest, as they say, is history,” Sherman says. 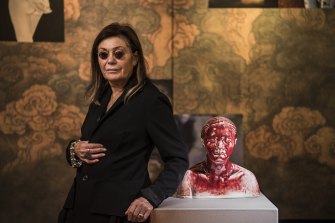 Sherman and husband Brian are divesting 100 works from their personal collection at auction this week featuring notable contemporary artists the couple championed over 30 years.

At the Sherman Galleries, Sherman presented the first Sydney shows of two of those hopefuls, Guan Wei and Ah Xian, and as a result of this initial and ongoing engagement with Chinese contemporary art, she met megastar Ai Weiwei, staging his first solo Australian exhibition.

Renowned for their discerning eye, the Shermans collected key artists’ work in-depth, often before they had become well known.

It was Gene Sherman who recognised Shaun Gladwell’s prodigious talent at art school and acquired the artist’s early works. Imants Tillers was introduced to the Shermans through the gallery’s curatorial director William Wright.

“Collecting invariably involves an emotional response on my side. I don’t think good collections are built on what people feel might appreciate in value,” Sherman says. “Acquiring art, for me, is based on three principles: does the work appeal visually? Is it conceptually rich enough? And
does it have emotional appeal?

“Contemporary abstract art is of little interest to me. Originally, abstraction flourished post World War II, at a time when America was flexing its muscle after the near destruction of Europe. Wipe the slate clean, remove the horrors of Europe from the canvas, and give expression to freedom,” Sherman says.

“These were the desires which shaped the thinking of the early abstract painters such as Pollock, de Kooning, Frankenthaler. Nowadays, abstract work no longer has these connotations. Contemporary art, for me, needs to be socially engaged and to somehow speak to the ills of our time.”

Six years ago, Sherman, 75, began downsizing the couple’s extensive collection of contemporary art – which now numbers 700 pieces (some monumentally large, others the size of an A4 page). Every year since she has sent to auction a capsule collection numbering no more than 16 pieces so to avert flooding the market.

This auction represents an acceleration of her plans to achieve a core legacy collection of 300 works, a more manageable size for daughter Ondine and filmmaker son Emile, neither of whom share their parents’ zeal for collecting.

“At 10 to 16 pieces a year how far was I going to get? I would have had to live 150 years to make a sensible dent in this collection,” Sherman says.

The Shermans have gifted works of art to MoMA in New York, Tate Modern in London, National Gallery of Australia and University of Melbourne and numerous large-scale works to the Art Gallery of NSW and Sydney University’s Chau Chak Wing Museum.

The auction, however, does not spell an end to Sherman’s collecting passions. “Twenty-five per cent of the sale proceeds will go back into collecting, simply because I’m addicted and there are art categories I would like to grow,” Sherman says.

“The African collection is the newest collecting area – mainly West Africa – although we have always had a significant holding of South African art. The rest goes back into the family assets and part of that goes into the family foundation.”