The last known stand of Wollemi pines was saved but not so lucky the nightcap oak tree, several orchids and a host of other plants that now have a raised threat level or have been entirely wiped out in the recent fires.

While it’s too early to tally all that’s been lost – some scientists warn it might take a decade to glean precise information – attention is turning to how we can better manage our natural landscapes and tend our domestic gardens in the face of a global increase in the frequency and severity of fire incidents.

It’s not straightforward. We want to keep the pockets of wilderness we have left in all their rich, diverse, rampant glory but we also want gardens that lower fire risk to houses. 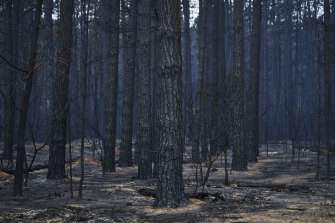 While protecting natural landscapes requires better monitoring of the distribution of plant species, seed saving, sensitive preventative burning and perhaps even the more contentious issue of forest thinning, reducing the fire risk of gardens is more a question of plant selection and placement.

How far a gardener feels they need to go will depend on where they live – Balwyn versus Birregurra, say – and personal aesthetics. For some people, being nestled in the thick of nature is the very point of gardening where they do, whereas others see only potential fire traps.

In the wake of the 2009 Black Saturday bushfires, the CFA consulted horticultural academics, landscape designers and others to produce a Landscaping for Bushfire guide that can still be downloaded from the CFA website. The 64-page text, launched in early 2012, looks at how the survivability of houses in bushfires can be “significantly enhanced or endangered” by their surrounding gardens.

The message is the same now: plant selection, location and arrangement can all affect fire risk. While all plants and landscapes can burn, some burn more readily than others.

The plants that take the longest to catch fire are those with high foliage moisture contents, such as succulents, European deciduous trees and Australian plants from rainforest areas (think Flame Trees and Moreton Bay Figs).

Plants with high salt content in their leaves, such as saltbushes (including Atriplex and Rhagodia species) also have low flammability, as do plants with open branching patterns, coarse textures and thick fleshy leaves. 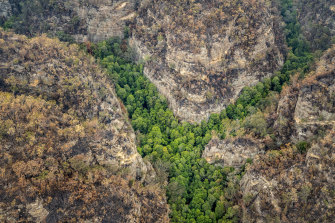 Eucalypts, by contrast, are among those plants that often get a bad rap because of the high levels of oils contained in their leaves, which increase their flammability. Some eucalypt species have the added incendiary characteristic of loose, fibrous bark or bark that is shed in ribbons.

For those in doubt about the fire vulnerability of particular plants, the Australian Plant Society website makes the suggestion of throwing a small sample of foliage from a plant in question onto a fire (when fire restrictions permit) and seeing how much it flares up. The website also contains lengthy lists of native plants that are relatively slow to burn.

But the Landscaping for Bushfire Guide makes clear that it is the arrangement of vegetation within a garden – no matter the flammability of individual plants – that is central to how a fire spreads. It details the role that can be played by appropriately sited windbreaks and by creating spaces between plants, garden beds and tree canopies. It talks about “carefully” locating trees and creating “defendable spaces” and regularly pruning and removing dead plant material.

Keeping some areas (particularly those close to the house) watered is another way to reduce fire risk – as the soil dries out the moisture content of plant decreases and its flammability increases. This is why there is an upside – on the fire front, at least – of a green lawn, which can act as a firebreak.

Then there is the question of mulch – inorganic ones such as gravel or granitic sand being safer than straw and wood chips, which are highly flammable. That also brings to mind the question of where you stash woodpiles – and the list of fire precautions goes on.

There is no end to the measures you can go and everyone will have a different cutting-off point. Making a garden is a personal pursuit and there will always be factors other than bushfire at play. But increasingly it needs to be one of the considerations on the table.