Since breaking through playing a schoolgirl murderer in Peter Jackson’s 1994 crime drama Heavenly Creatures, Kate Winslet has turned in an impressive list of memorable performances.

Most iconically, she was first-class passenger Rose who falls for penniless artist Jack in 1997’s Titanic, an Oscars-sweeping triumph that was the biggest box office hit in history at the time. She was an unravelling epidemic specialist hunting the source of a killer virus in the prescient 2011 thriller Contagion. And she won over Australian audiences as stylish Tilly in 2015’s The Dressmaker. 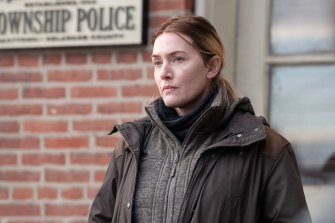 Kate Winslet in Mare of Easttown.Credit:HBO

An English actor who comes across as straight-talking, smart and well-grounded, Winslet always seems to be a strong presence on screen. Precise with accents and physical details, she humanises difficult characters and adds complexity to warm-hearted ones.

Now, the winner of an Oscar for The Reader (plus six other nominations), an Emmy (from two nominations) and a Grammy (for best spoken word album for children) is winning praise for the gritty drama series Mare of Easttown.

At 45, Winslet has decades of great roles ahead. Having shot a role for Avatar 2, she is down to play war correspondent Lee Miller in Lee then a cryptocurrency scam whistleblower in Fake! But in an already brilliant career, what are her greatest performances?

Jocelyn Moorhouse’s vibrant comic drama turned on Winslet’s performance as revenge-seeking Tilly Dunnage, a high-fashion dressmaker who returns to her godforsaken hometown years after being accused of murder. “I’m back, you bastards,” she says defiantly. 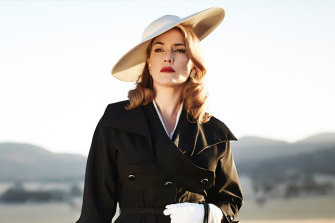 Kate Winslet in The DressmakerCredit:Universal

Winslet won an Emmy for the title role in this HBO series, playing a struggling single mother who rises to run a restaurant business during the Great Depression. In a somewhat sappy melodrama directed by Todd Haynes (I’m Not There, Carol), Mildred’s quiet determination to make a new life and protect her two daughters drives the drama through five episodes.

Winslet plays impulsive Clementine who tries to erase memories of Jim Carrey’s Joel in Michel Gondry and Charlie Kaufman’s brilliantly inventive sci-fi romance. She calls herself “just a f—ed up girl who’s lookin’ for my own peace of mind” but Clementine’s vulnerability and openness, in the face of pain at the ending of a romance, are heartbreaking. 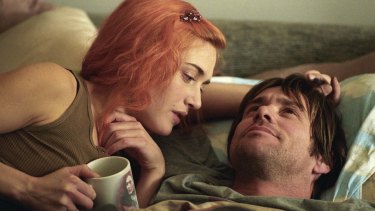 Kate Winslet and Jim Carrey in Eternal Sunshine of the Spotless Mind.Credit:Focus

Jane Campion’s psychological drama has Winslet playing Ruth, a devotee of an Indian religious cult whose parents hire a tough guy American (Harvey Keitel) to de-program her. In a bold choice of movie after the success of Titanic, playing a manipulative mouthy character with sex scenes, Winslet delivered a strikingly edgy performance. 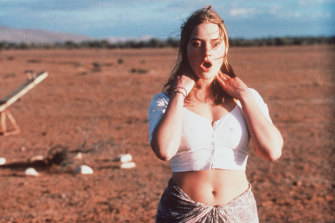 Winslet in a scene from Jane Campion’s Holy Smoke!

Helen Hunt won best actress at the Oscars in 1998 but Winslet, who was nominated for playing Rose, was the most enduring performance. After a troubled shoot, director James Cameron delivered an epic romance, between 17-year-old Rose and Leonard DiCaprio’s 20-year-old Jack, that was cut short by the sinking of the great ship on its first voyage. 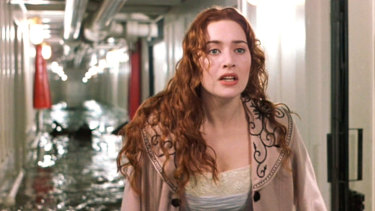 Winslet won an Oscar for playing Hanna Schmitz, an illiterate Auschwitz guard who has an affair with teenage Michael (David Kross) in Germany after World War II.

Director Stephen Daldry’s drama, based on Bernhard Schlink’s bestselling novel The Reader, is far from perfect but Winslet humanises an unlikeable and troubled woman for haunting effect.

Winslet drew on all her talents to create one of her most vivid characters, troubled detective Mare Sheehan. And holding together a seven-part crime drama elevates it to her finest performance.

Much of the emotional impact of the series comes from looks and silences. But Winslet makes Mare grittily authentic with a worn-down physicality, a convincing Philli accent, attention to small character details (like the perfect ‘oh’ at a key discovery in the final episode) and way she seamlessly fits into a well-drawn small town community going through dark times.