Almost a decade into their tenure as arguably Australia’s most influential underground rock band, The Scientists went out in a thrilling blaze of glory.

It was 1987. The band were recording their seventh album The Human Jukebox and founding member Kim Salmon recalls it was “a last dying explosion before the band conked out” for good. “That was our last gasp … and I loved it,” Salmon says. “It was quite a significant thing.” 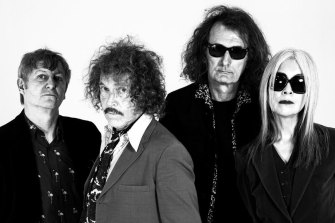 The Scientists are back with more grunge.

It also sent the man himself, long since credited as the father of grunge, on a whole new adventure. And it’s taken more than 30 years to come full circle.

Sitting in a Northcote cafe, the prolific songwriter and guitarist has stepped away from the sketch books he’s been filling with drawings since live shows mostly dried up early last year. An exhibition of his paintings a few months ago was a great success, he says with a smile, but it’s good to be talking about the Scientists again.

Being over 60 means Salmon qualifies for a seniors card, but the near permanent smile on his face is more akin to a teenager’s cheeky grin. Perhaps it’s a friendly disposition that partly explains his longevity, but you won’t last terribly long making rock ‘n’ roll if you’re waiting for the music industry to smile back. 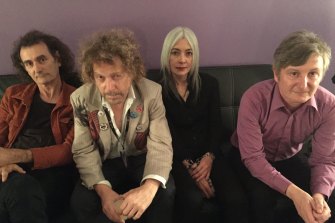 Kim Salmon with the Scientists

“We were really indie,” Salmon says, chuckling at the early days in the Scientists’ laboratory. “We weren’t nurtured, it was a real chaotic path. There were fights along the way, there was (record label) disputes and we got into a bit of trouble, but it was a very productive period.”

After forming Perth rock band the Cheap Nasties in 1976 (and leaving the group the next year), Salmon put together the first incarnation of the Scientists with drummer James Baker and bass player Boris Sudjovic – the later becoming a stalwart not only of the Scientists but Australia’s vibrant alternative rock scene.

Seven albums in seven years is testament to the band’s output. Relocating from Sydney to London in 1984 also speaks volumes about Salmon’s refusal to follow the accepted path for local bands of the era, touring up and down the east coast.

“We wouldn’t have been able to keep the band together (staying in Australia), we were too restless,” Salmon says.

‘Sometimes you’ve just got to go with where your mind takes you.’

The group’s many influences, from Salmon’s love of the Cramps and the Stooges to guitarist Tony Thewlis bringing elements of the Beatles and Blondie to the table, made for an extraordinary melting pot of music.

“He (Thewlis) didn’t really care about the Cramps when he joined the band … the rest of us were (listening to) the Gunn Club and Alex Chilton and the Stooges; it was Alex Chilton that was his entry point into our world. Ultimately, we are very pro rock ‘n’ roll, Tony just had a different view of it, you wouldn’t expect him to be the player he is.”

By the time 1983 album Blood Red River and 1985’s Atom Bomb Baby had been released, the groundwork had been laid for what later would be recognised as grunge, the term often applied to Seattle natives Nirvana, who broke through in 1991 with Nevermind.

Veterans of Seattle’s grunge era, Mudhoney, honed their early sound in the swampy terrain of the Scientists and two decades after The Human Jukebox album was released, it was Mudhoney coaxing the Scientists back out of retirement to play a couple of shows in Europe in 2006.

There’s been a handful of other shows and short tours between `87 and those shows, but the release this month of Negativity, the first studio album from the Scientists in 34 years, has given Salmon a whole new reason to smile.

His iconic band’s new music follows a couple of short European tours in 2018 and 2019 and plans for an American tour that was cancelled when COVID-19 struck. “It is a nice thing to be back together,” Salmon says.

Featuring the hallmarks of classic Salmon creations, Leanne Cowie’s kooky drum beats, the wildly inventive guitar of Tony Thewlis and song titles like Moth Eaten Velvet and Outer Space Bogie, Negativity is the Scientists’ album that was bound to be made.

“Sometimes you’ve just got to go with where your mind takes you,” Salmon says about his songwriting, but he could easily be talking about any of his many and varied musical projects. “Have a little daydream, you know when it works and when it’s not working.”

In the years since the Scientists’ first major hiatus, Salmon has played with or formed the Surrealists, Beasts of Bourbon, Darling Downs (with Ron S. Peno), written hundreds of songs and played thousands of shows. He thrives on creativity and it shows on his face, as well as his vintage choice of clothing. In 2021, he says it’s again time for the Scientists to shine.

“We’re all from different places but we’ve got this history together and trying to preserve it without killing it, that’s the whole deal,” Salmons says. “There you go, there’s your last line,” he adds, flashing that cheeky grin.