Customers have been increasingly aggressive towards retail staff who have had to enforce vaccine mandates as part of Victoria’s most recent relaxation of COVID-19 restrictions, which “blindsided” workplaces after they were given just a few hours’ notice.

A cup of hot coffee was thrown over a worker in one instance reported to the Australian Retailers Association, prompting chief executive Paul Zahra to write an open letter to Premier Daniel Andrews. He expressed concern about rising customer aggression and asked for an end to the mandates. 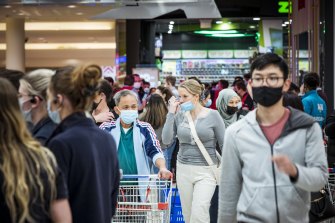 “Our members have reported thousands of incidents of customer aggression, including many acts of significant violence towards retail staff – such as staff being beaten up, an instance of a boiling cup of coffee being thrown over a frontline worker and a shopping trolley being thrown at another,” Mr Zahra said.

In a push to temper the violence, Mr Zahra urged the Victorian government to end vaccine mandates for shoppers from December 15, in line with NSW. However, the government has ruled this out.

Some of the country’s leading epidemiologists have also called for the rules to ease, but Attorney-General Jaclyn Symes said on Wednesday the requirements would not be relaxed 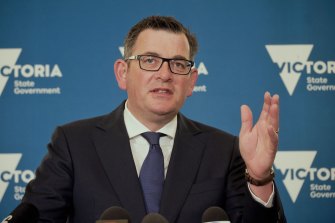 Last week Mr Andrews announced restrictions would be wound back as the state neared its target of fully vaccinating 90 per cent of residents aged 12 and over.

The government also brought forward vaccination requirements of staff and customers from the scheduled date of November 26. Mr Zahra said the changes were made “without any warning” leaving non-essential retailers “blindsided”.

Due to a quirk in the state’s road map, unvaccinated people could enter retail outlets after the 80 per cent vaccine threshold, but were banned at the 90 per cent threshold. Last week’s snap announcement meant they were shut out a week earlier than forecast on the road map.

“The timing and the stop-start nature of the vaccine checking requirement, following freedoms experienced by unvaccinated Victorians, has been extremely challenging for retailers to manage,” Mr Zahra wrote.

He said customer aggression over the past week had been worse than at any other time in the pandemic, with incidents reported in a variety of retailers including department stores, hardware and charity shops, some of which saw the need to hire security.

Children were also included in the vaccination requirements in another surprise move that Mr Zahra said came without adequate communication or clarity.

“We also received contradictory advice from the department about staff vaccinations, and had to correct this advice with our members, causing great confusion and unnecessary further stress,” he said.

Mr Andrews has previously said vaccine mandates would continue until 2023, but last week said the vaccinated economy would last “at least” until the Melbourne Formula One Grand Prix in April.

On Tuesday, Mr Andrews said he “hoped” the restrictions would be released sometime in 2022, by which time most people were likely to have had a booster shot of the COVID-19 vaccine. He said he might say more about the timeline for the vaccinated economy when Victoria’s numbers reach the mid-90s.

Leading pandemic specialists Julie Leask, Catherine Bennett and Tony Blakely argued in The Age on Wednesday that a vaccination rate of 90 or 95 per cent was high enough to protect the state from any increased transmission that might happen if unvaccinated people were given the same rights as those who’ve had their jabs.

Professor Bennett, the epidemiology chair at Deakin University, said the government should end the lockout if cases did not surge as a result of unvaccinated people being allowed in retail outlets.

“Going forward, there wouldn’t be an epidemiological argument, but there might be in certain circumstances if there was a large surge in infection rates,” she said.