The federal environment department will probe the contentious clearing of bushland for the proposed 182-lot housing estate on a 20-hectare site near the town of Manyana.

The site is part of a small area of bushland which was not burnt during last summer's devastating bushfires but the surrounding area, in particular the national park was significantly damaged. 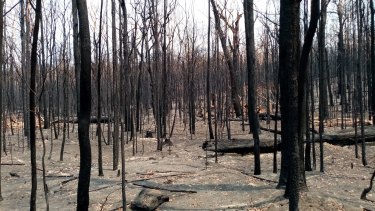 The Federal Court in May ordered the developer of a planned housing estate to stop work until independent ecologists can inspect the area for endangered wildlife.

The bushfires had significant impact on surrounding habitat and in particular on a colony of grey headed flying foxes. Bushfire impacts on identified threatened species in individual areas are likely to be factored in determining outcomes.

The project, which was approved by the Shoalhaven council and the NSW government, will be subject to a detailed assessment of matters of national environmental significance under the federal Environment Protection and Biodiversity Conservation Act to determine if or how the project might go ahead.

A federal government source with knowledge of the process said the review would likely take "some months".

The Environmental Defenders Office had sought to halt the development to enable a team overseen from the Australian National University to inspect the site for greater gliders.

Protesters, in particular, have been keen to halt further destruction of woodland in a region hard-hit by the fires.

It has attracted high-profile support from actor Claudia Karvan, who filmed a video calling for the NSW government to protect the bushland as a wildlife refuge for threatened species.

Earlier this year NSW Planning Minister Rob Stokes called on the Shoalhaven Council to assist efforts to offer an alternative site for the developer to build homes.

Get our Morning & Evening Edition newsletters

The most important news, analysis and insights delivered to your inbox at the start and end of each day. Sign up to The Sydney Morning Herald’s newsletter here, to The Age’s newsletter here and Brisbane Times‘ here.