Takeaway addict, 28, and her father lose 17st between them after she was motivated to slim down when she had chest pains and struggled to get up off the sofa

A father-daughter duo whose combined weight was more than 45 stone thanks to their couch potato lifestyle have become champion slimmers after shedding 17 stone between them.

Beth Young, 28, from Hull in East Yorkshire experienced chest pains and struggled to get up from the sofa in September last year and it acted as a warning to her that she needed to address her 24st weight.

Three months after starting to address her own weight problems,Beth encouraged her maintenance engineer father Pete Dowell, 55, who weighed more than 21st to join her.

Now weighing 14st 10lb, Beth, who has a son named Rio, nine, with her electrical engineer husband Gareth, 32, said: ‘I was in denial about how much I weighed. 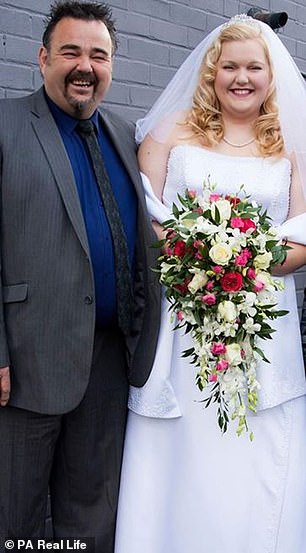 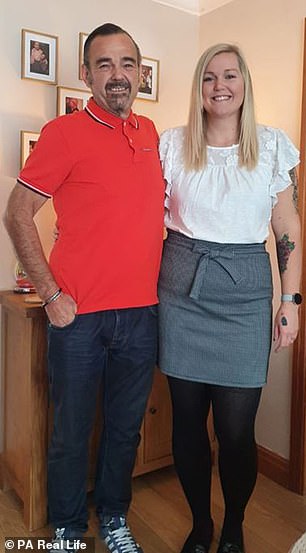 ‘I stopped looking in mirrors and would hide away in photos.

‘I was easily eating five takeaways a week and Dad was just as bad.’

Beth and her father’s bond strengthened thanks to their weight loss and she has now become a qualified Slimming World weight loss consultant.

Thinking back to her wake-up call, Beth said: ‘When I had chest pains just trying to stand up, I thought, ‘If I’m like this now, what will I be like in 10 years’ time?’

‘Dad and I reached our target weights in October this year. 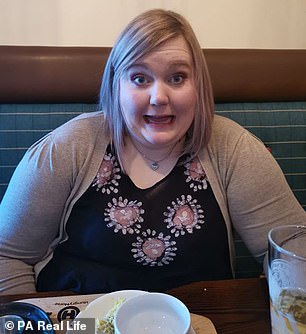 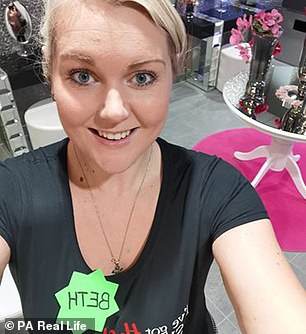 Beth experienced chest pains and found she was unable to get up off of the sofa last year, which acted as a warning to her to lose weight

‘He’s done so well, too, I couldn’t be prouder.

‘I honestly don’t believe I’d have managed to get to this point without him. He’s been with me to celebrate the highs and pick me up during the lows.

‘He’s been my biggest cheerleader.’

Beth was 17 she underwent surgery to treat her atrial fibrillation at Hull Royal Infirmary in 2009, but a week later she found she was unable to move her legs.

She said: ‘For two years I’d suffered with heart problems. My heart would race so fast that my pulse and heart were visible through my skin.

At the age of 17, Beth was diagnosed with a blood clot which left her unable to move either of her legs

She spent eight days in hospital and a further six months recovering from the clot, and by the time it had dissolved she weighed almost 20st

‘No one took it very seriously at first, but I eventually got a diagnosis and two weeks later I was having keyhole surgery.

‘A week after the operation I woke up and my legs were swollen and dead. I called 999 and they told me to get to hospital immediately.’

Diagnosed with a blood clot, Beth spent eight days in hospital, before taking a further six months to recover from the ordeal.

‘I wasn’t put on bed rest, but I was told to take it easy,’ she recalled. ‘It took months for me to get my energy levels back.

‘Even getting up the stairs to the bathroom was hard work – it left me out of breath.

Lunch: Chicken in tomato sauce with sweet potato and broccoli

‘I’d never been super slim, but up until that point I hadn’t been overweight either.

‘I started eating anything and everything, simply out of boredom.

‘I was emotional and fed up. I just ate and ate.’

Beth gained four stone in six months and by the time her blood clot had dissolved she nearly weighed 20st. 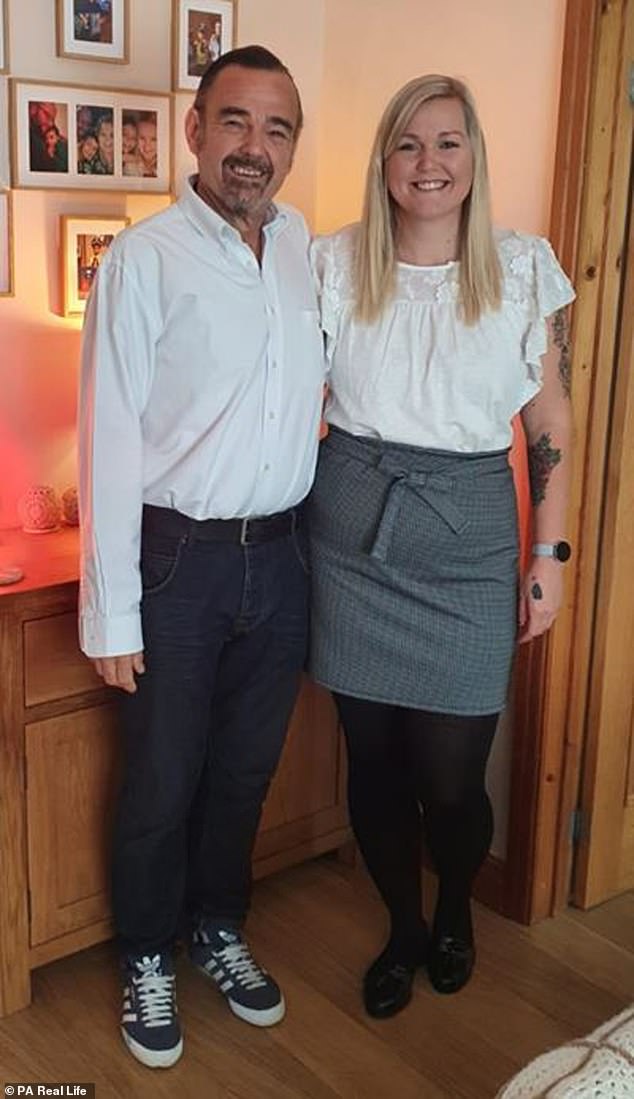 After starting sessions with Slimming World, Beth saw the benefits and encouraged her father to join in with her

The pair were not always close but shared a bond over fast food, with Beth saying they were as bad as each other.

Despite being bullied on a night out about her weight, Beth chose to stay in rather than address her weight.

‘There’s only so many times a random fella can call you a “fat cow” before you give up.’ 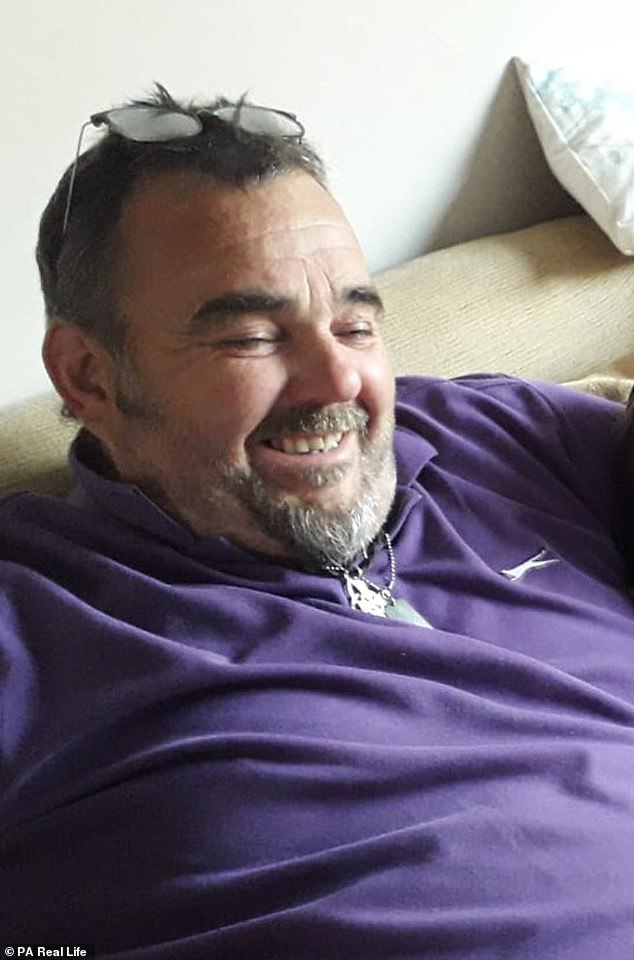 But, by the summer of 2019, plagued with aches, pains and palpations, it finally hit home that her weight was a real threat to her health.

‘I was struggling to move,’ she said. ‘I couldn’t even dance for half a song with Rio in the living room.

‘I hadn’t suffered with palpations since my operation a decade before and I was terrified something was going to go wrong again.

‘I’d wake up and my joints would be in agony.’

In September 2019, she joined her local Slimming World group and was nervous about her first meeting. 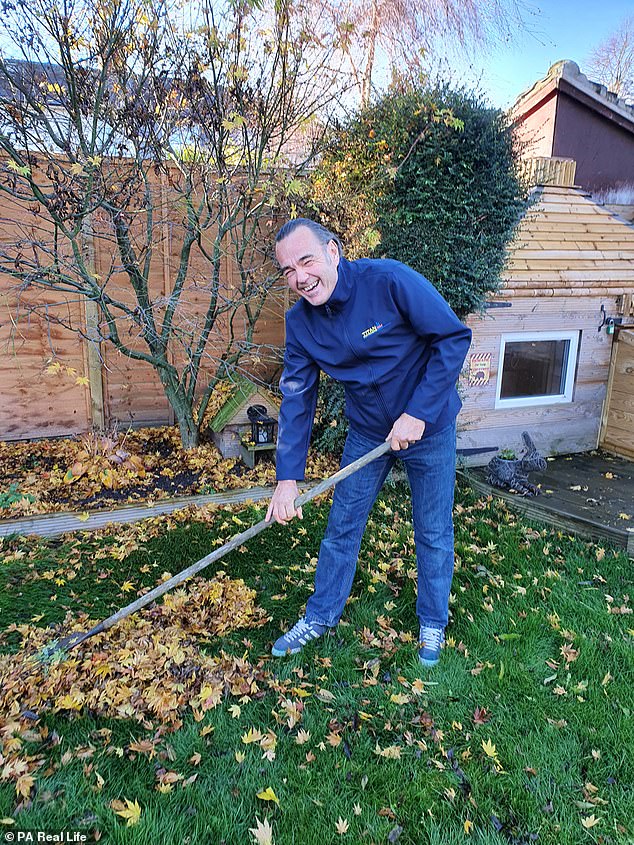 What is atrial fibrillation?

Atrial fibrillation is a heart condition which causes an irregular and often abnormally fast heart rate.

In some cases it can be faster than 100 beats per minute.

This causes problems such as dizziness, shortness of breath and tiredness.

She said: ‘It took a lot of courage to go. I was the biggest person in the room and I just wanted to run out.

‘Then one of the ladies turned to me and said she had lost 12 stone since she’d joined.

‘I knew in that moment if she could do it, so could I.

‘I went from being totally overwhelmed by nerves to being full of excitement.

‘I can’t describe it, I just knew this was it.’

Beth swapped sugary cereals and greasy takeaways for porridge and homemade veggie lasagne and in her first two weeks she lost half a stone.

By Christmas 2019 she had lost two stone and decided to introduce the programme to her father.

She said: ‘Dad had tried every fad diet under the sun. But after years of losing weight and putting twice as much back on, he’d given up on diets.

‘I had to keep nagging him and explaining that Slimming World isn’t a diet – it’s a lifestyle.’

Beth’s persistence paid off, with Pete signing up to his own local slimming group in January 2020. 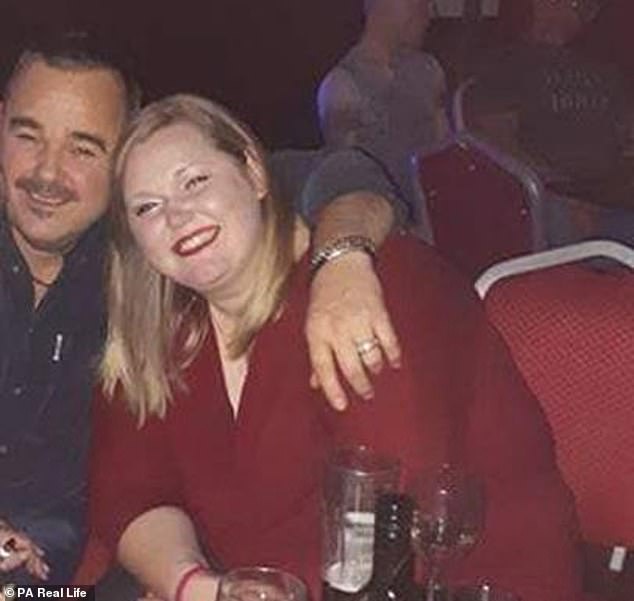 Beth had been called names by other people while on nights out, but at the time, instead of addressing her weight she chose to stay in at home 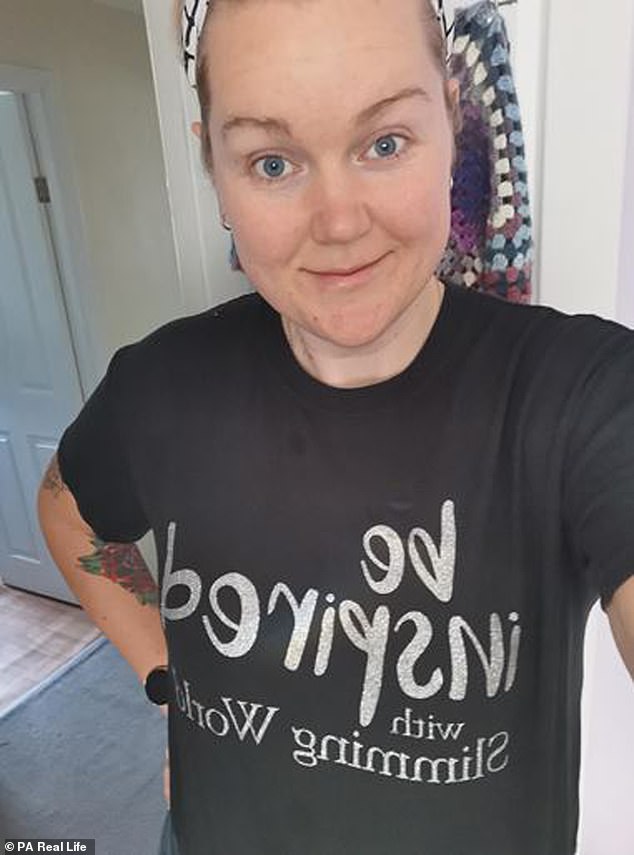 ‘We went to different groups,’ Beth explained. ‘But they were at the same time every week and as soon as we got out we’d have a phone call to discuss the meeting.

‘From the get go I could tell Dad was really pleased with how it went.

‘He dropped more weight than me in his first week – losing an impressive 12lb.’

With their weekly phone calls solidifying their relationship, the pair were soon swapping recipe ideas.

Beth said: ‘It really brought us closer than we’d ever been. We’re still constantly encouraging each other to keep up the good work. 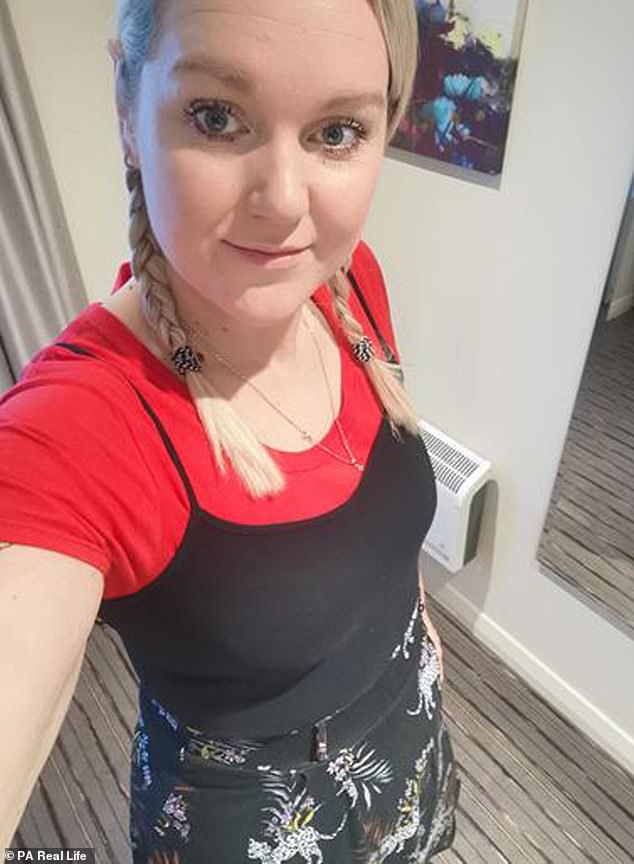 Beth said that if either her or her father is feeling down, the other person will remind them how far they’ve come to encourage them

‘If one of us is down, we’ll have a chat and remind each other of how far we’ve come.’

Both reaching their target weights by September this year, Beth is now 14st 10lb and a size 16 and Pete is 13st 6lb – losing an impressive 12 inches off his waist, which is now 33in.

Beth said: ‘For the first time in a decade I finally feel comfortable in my own skin.

‘When Rio asks me to chase him, nothing will beat the look of shock on his face now Mummy can finally keep up.

‘Instead of being out of breath after half a song, we can dance in the living room all day long together. 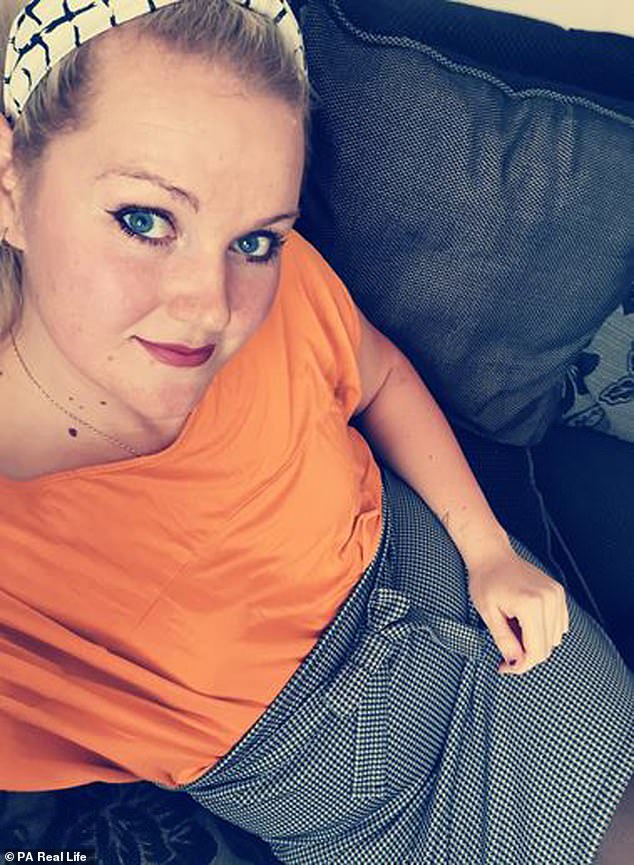 ‘I’m so grateful to have the opportunity to be the mum that Rio deserves.

‘I wouldn’t be able to say that if it wasn’t for my amazing dad.’

And Pete, who has lost seven inches off his neckline – going from 22in to 15in – is equally grateful to his daughter.

He said: ‘Without a shadow of a doubt I would not be here – eight stone lighter – if it wasn’t for Beth.

‘I’m sure she won’t mind me saying she was an absolute nag, but it paid off. 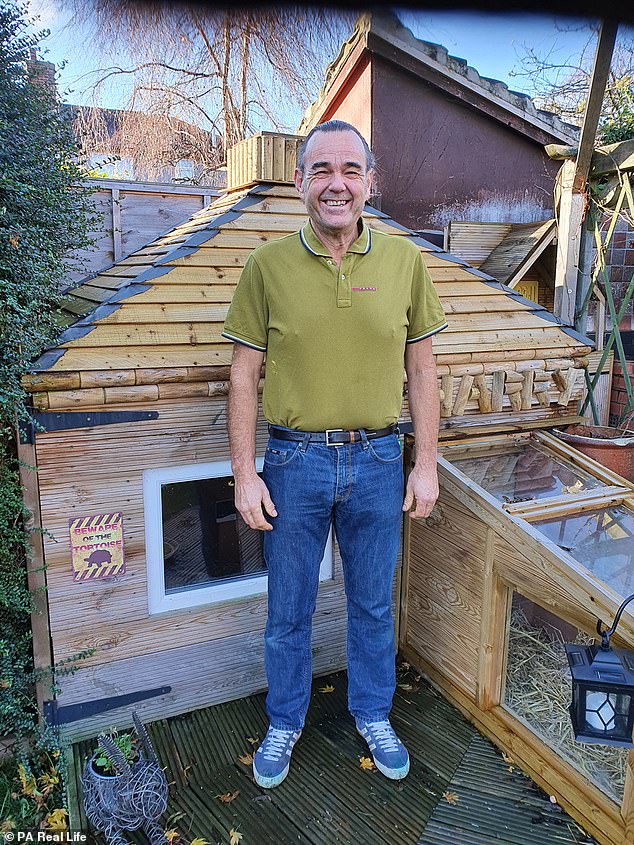 Pete, who is now eight stone lighter, says he feels 10 years younger in himself thanks to the dieting

‘There’s such a stereotype surrounding slimming groups, that they’re just for women and men won’t be welcome.

‘The truth is it’s the complete opposite. From day one I’ve felt completely welcome at Slimming World.