A thrifty father-of-two revealed how he bought Christmas dinner for just 50p per person by shopping ‘yellow sticker’ discounts.

Part-time supermarket worker Alasdair Baker, 47, from Aldershot, Hampshire, will spend Christmas Day with his partner Sophie, 43, 18-year-old daughter and three-year-old son and will feed the entire family for a total of just £1.56.

His incredible finds include a bag of Brussels sprouts for 5p, carrots for 5p, 2kg of potatoes for 7p, broccoli for 5p, two winter berry sponges for 13p each, a cheesecake for 18p and a large turkey crown for just £1.03.

For that, Alasdair, Sophie and their daughter will all get full adult portions, and there is enough for a smaller plate for his three-year-old son, too.

Alasdair finds the bargains at the Morrison’s where he works part-time and has been storing the ingredients in the freezer. On top of the discounted ‘yellow sticker’ reduced prices, Alasdair also got a 15 per cent staff discount. 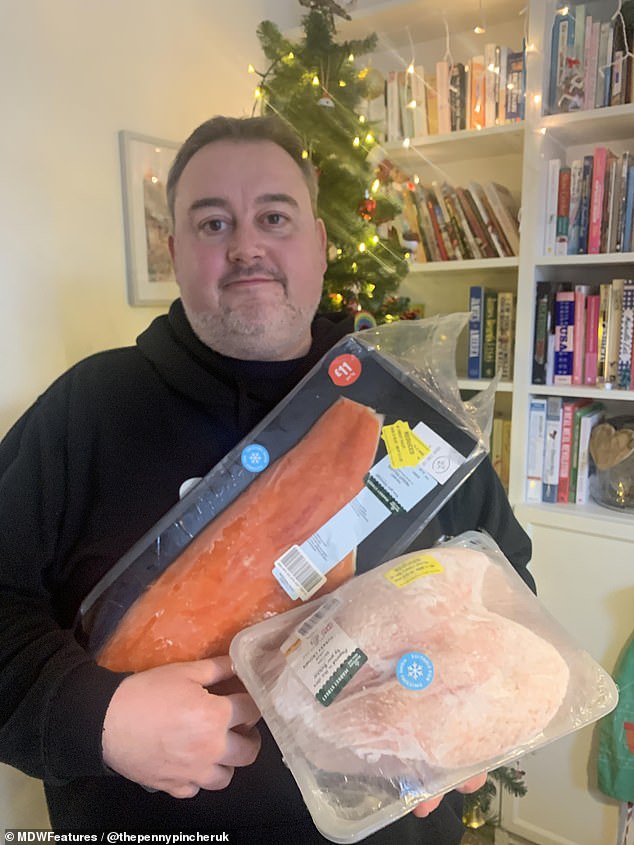 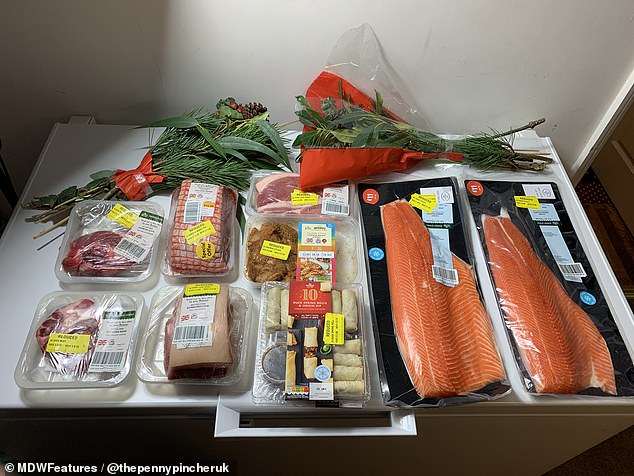 By sticking to ‘yellow sticker’ discounted products, Alasdair was able to keep his costs down. Pictured: Some of his impressive haul, including two sides of trout secured for just £1.07 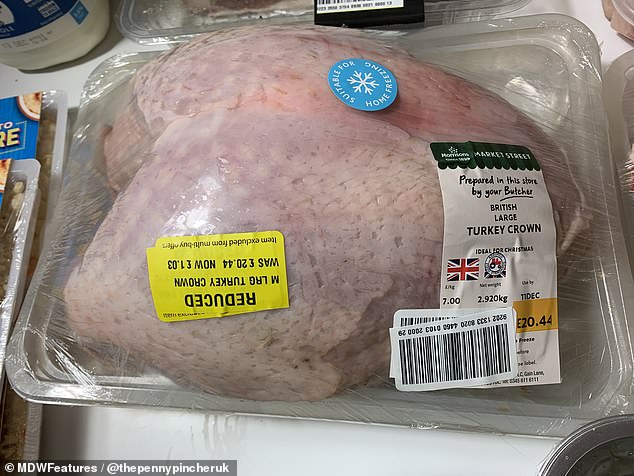 One of Alasdair’s biggest discount wins was this large turkey crown, which will be the centrepiece of his Christmas feast, at just £1.03

Alasdair said: ‘I had to buy a new freezer this year, just to fit all the bargains in, and even that is now completely full. We’re trying to have a spend free January where we use everything out of the freezer and only buy fresh fruit and milk.

‘It’s the big turkeys that aren’t being sold at the moment, especially as people aren’t having massive Christmas gatherings due to COVID-19.

‘People are also waiting before buying their Christmas dinner as plans are changing, so there are lots of Christmas items that just aren’t being bought. I told my friends I wouldn’t be happy if I didn’t have a yellow sticker turkey, so I’m so glad I got one.’

What he spent on Christmas dinner

As well as Christmas dinner, Alasdair plans to have a second full roast dinner and will put on a buffet of cold roast turkey sandwiches with homemade pickle, made earlier in the year from yellow sticker vegetables, if anyone is still hungry.

Alasdair’s keen eye for a bargain was honed in 2017 after his confectionary business went bust and he was landed with £500,000 worth of debt.

He said: ‘I used to run a food import company selling American candy and other imported items. Unfortunately the business ended up going bust and I ended up half a million pounds in debt and bankrupt.

‘I had a teenage daughter, I had just got divorced and had a baby boy on the way so I needed to feed us. It was a necessity. If I didn’t do that then we would struggle to have enough money for food.

‘Once you’ve been in that situation you don’t want to be in it again. I turned into the “penny pincher” to find as many cheap things as I possibly could to save as much money as possible.’

With no money to cover food costs, it was vital that Alasdair hunted out bargains to feed his family and although his financial situation is more stable today, bargain hunting is now a habit and one he doesn’t plan to drop anytime soon.

As a trained chef, Alasdair also has all the necessary skills to turn bargain products into great family meals. 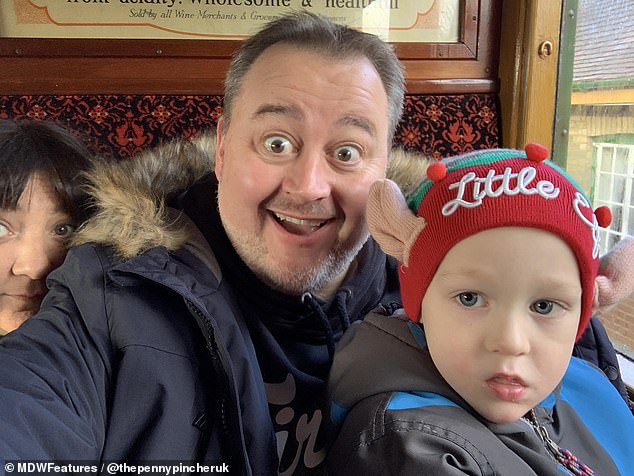 Alasdair will be spending his Christmas with partner Sophie (left), his three-year-old son (right) and 18-year-old daughter 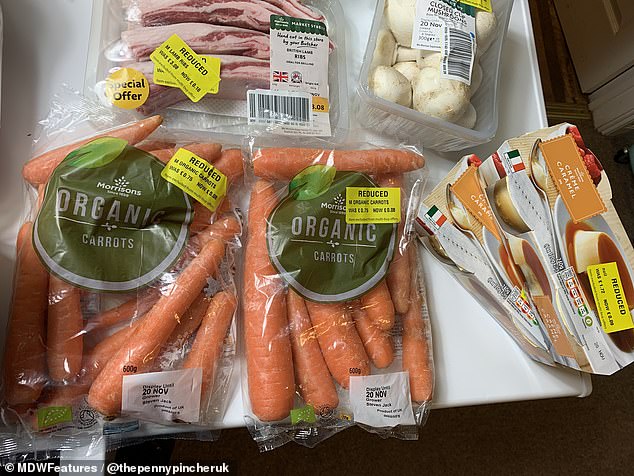 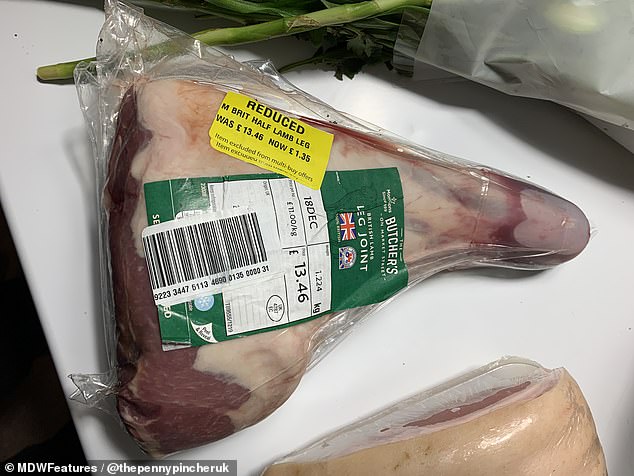 This leg of lamb was bought for just £1.36 thanks to Alasdair’s thrifty ‘yellow sticker’ buying

Having filled his freezer with bargain products throughout the year he has run out of room now and plans on having a no-buy January where he uses up some of the things in his freezer.

Alasdair’s job working in Morrison’s certainly helps him grab a few bargains, although he insists that he waits until the end of his shift to sift through the yellow sticker items as opposed to hoarding.

He said: ‘I started working part time in Morrison’s after being moved to part time in my job in e-commerce as a result of the pandemic.

‘It’s been a massive help in finding bargains and being able to cut down on our food spending.

‘People have said to me ‘you work in Morrison’s, surely you just take all the good stuff’ but that’s not the case at all.

‘I always pick up my bargains at the end of the day, when my shift has finished and find incredible deals which bizarrely haven’t been picked up by customers.’ 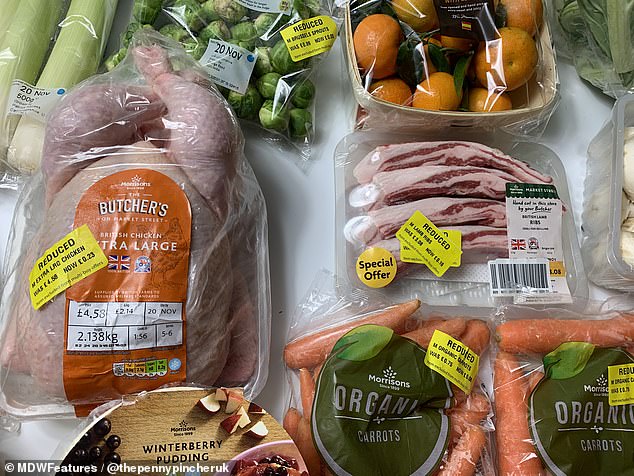 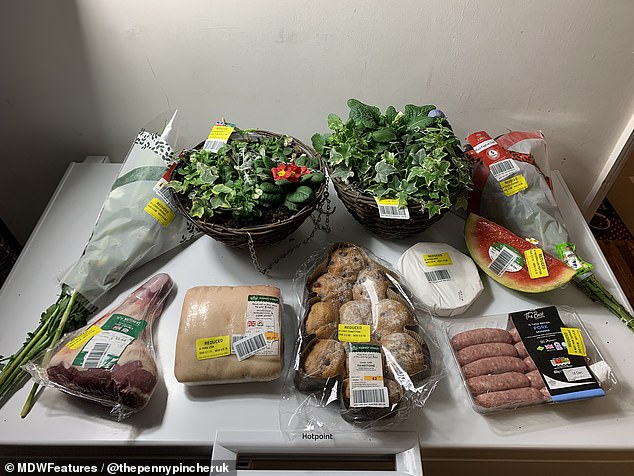 Alasdair’s advice for keen bargain hunters is to wait until the final reductions of the day between 6.30pm and 7.30pm where supermarkets cut the price of items by up to as much as 95 per cent.

He also says that it is more rare to find a bargain on meat, so his advice is to be quick if you see these items reduced.

‘I want to give people advice on what can be done on a really tight budget,’ Alasdair said.

‘I went from being quite well off and having nice holidays to it being the complete opposite.

‘Even if I won the lottery I don’t think my attitude to getting a bargain would change.’