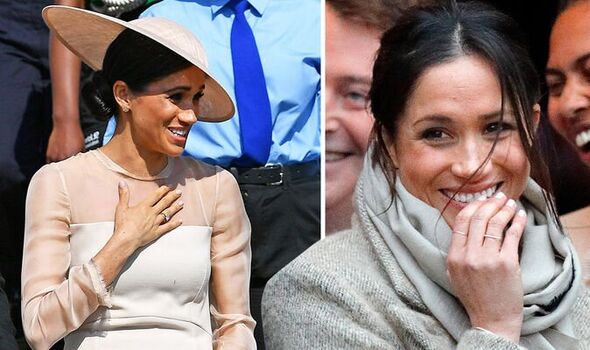 Meghan Markle’s body language is analysed every time she steps out in public, as people are intrigued to know the meaning behind certain gestures. Back in 2018, the Duchess of Sussex was spotted regularly displaying a certain hand gesture, and while it appeared many times that year, it wasn’t noticed in the years following. That was until her most recent appearance in New York City for Mandela Day when Prince Harry was invited to make a speech at the UN. In the final few moments before leaving in their car, Meghan was seen covering her mouth with her hands, almost concealing a giggle. Jesús Enrique Rosas, aka The Body Language Guy on YouTube, took a look at this moment, and the other times Meghan has used this gesture and gave his expert opinion on what this hand movement means.

In one of his latest YouTube videos, Jesús spoke about the hand gesture Meghan displayed “over and over again” in 2018, and discussed why “she’s doing it again”, most recently when leaving the UN last month.

Photographs show Meghan’s window lowered and Jesús said it was like she was “greeting her fans, with this gesture of giggling”.

Referencing January 2018 when Meghan and Harry visited a radio station in Brixton, the body language expert asked: “Remember this event?” 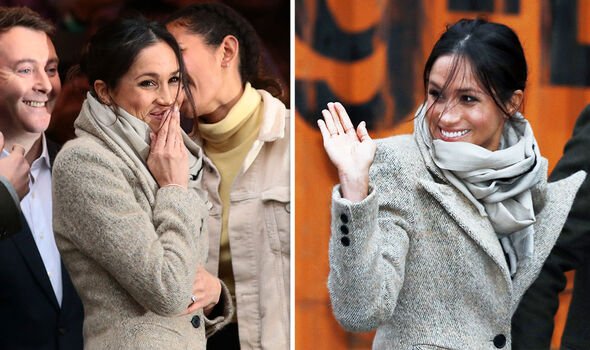 Jesús read a headline: “‘Meghan Markle dresses down for radio station visit with Prince Harry’, and that ‘dresses down’ part is important because somehow Meghan wanted to project the image of being innocent – that is the meaning behind this [hand] gesture.”

Meghan was photographed “not only covering [her] mouth but keeping [her] hand, elbow and arms close to [her] body”.

“Maybe you are a shy person and you begin to display this gesture,” he added then opined: “We know that Meghan is not shy. She was making this gesture to project an image a certain image – notice that pattern, the hand covering the mouth, she is raising her eyebrows to connect with people, it’s called an empathy bridge.”

In another image from the same visit, Meghan is seen “waving with her hand next to her face, in a very small cheeky way”.

“It’s repeated in many pictures, but not only is the hand near the face, but her left hand is covering her body, a defensive gesture like she is afraid or overwhelmed by the attention,” Jesús continued.

“The other picture, she is grabbing both hands – that looks exactly the same as her hands on Time magazine cover. It’s like driving attention to her – back then – engagement ring, that might’ve been her intention back then (in 2018),” he suggested.

“But the rest [of the hand gestures], are trying to project that image of being shy, not used to so much attention.

“This display shows she was trying to hide her face or act as a timid person. This is important, because this wasn’t the only time she did it in 2018,” Jesús claimed.

The expert then brought up another image of Meghan attending Prince Charles’ 70th birthday party held at Buckingham Palace Gardens in May 2018. 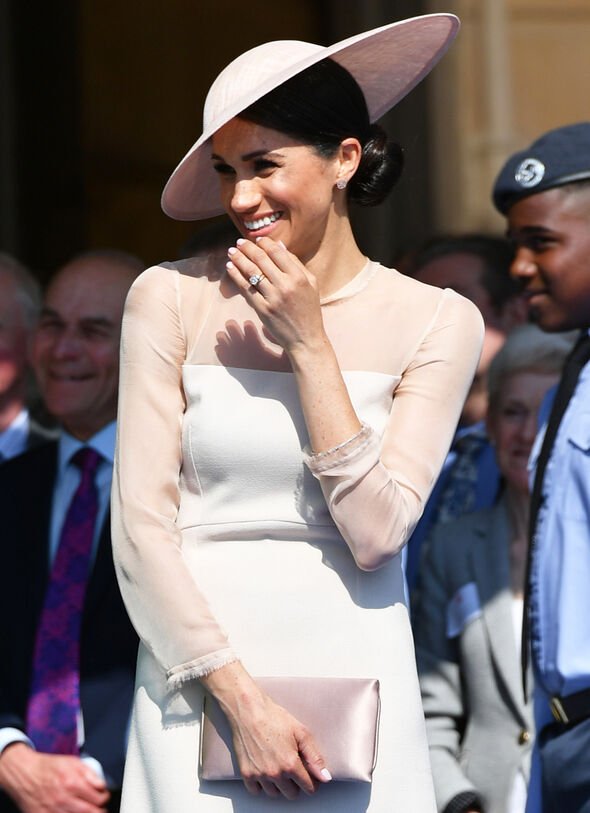 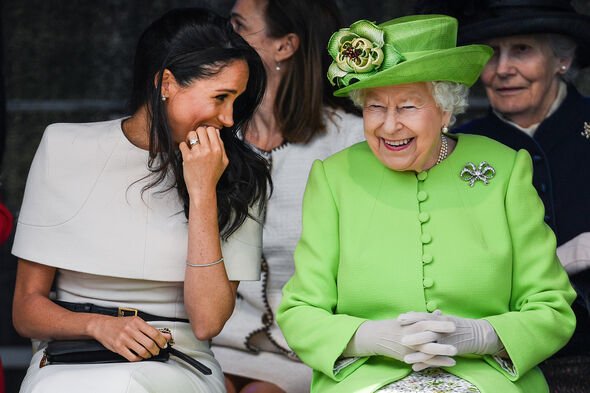 The event was a couple of weeks after Meghan and Harry got married, and she was seen again, covering her hand with her mouth when she giggled.

More broadly speaking, Jesús said: “If you do a Google search about Meghan Markle hand on mouth, or hand on face, or hand next to face, you will find photos of this year precisely, it’s like she wanted that year to project that image. ‘I’m the humble, shy, woman.’

Another time Meghan was seen using the same gesture was in June 2018.

Jesús said: “This was her first and, if I’m correct, her only engagement with the Queen.

“[Meghan] had this defensive, shy attitude, raising her eyebrows, trying to connect with the Queen. It was the same pattern over again.

“Also, in this case, she was sitting next to the Queen, she didn’t have armrests, so it’s normal to keep your arms close to your body, but that doesn’t mean that you will have your hand in a defensive manner and close to your face.” 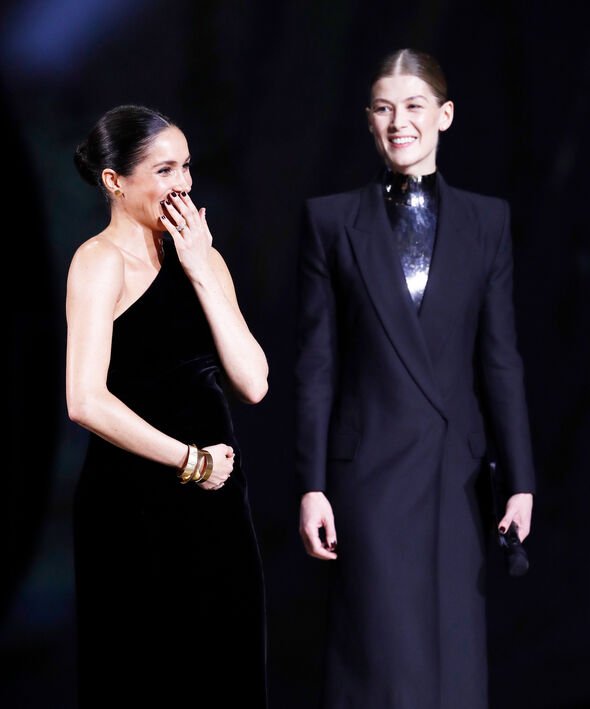 Another time Meghan used the hand gesture was in December 2018.

The expert added: “This is, as far as I know, the last recorded instance of this gesture, and it’s the same. In this case, we don’t have the raised eyebrows, she was starting to be more serious, even if she was smiling, she wasn’t as cute-faced in other instances, wasn’t exaggerated.

“What I found interesting, it was just this year (2018) [when she used the hand gesture],” and it was almost like “she wanted to project a certain image in that first year” of being Harry’s wife and the Duchess of Sussex.

“Now the question arises, why is this gesture making a comeback now? I have a theory and it depends on the event itself.”

Speaking about the UN appearance this year, Jesús suggested: “The event was about Harry, he was giving the speech. Meghan, maybe she wanted to display being shy, excited of the moment, and excited for her husband. This is part of her facade, to play the role of ‘I’m so excited for my husband.’”

Jesús Enrique Rosas is a Body Language expert and Persuasion consultant. He has written several books, and conducts masterclasses in body language analysis for Knesix Insitute.