The European Union wants to turn to Australia for the supply of critical raw materials including lithium and iron ore and move away from relying on Russia, as negotiations resume on a free trade agreement.

Head of trade and economics at the EU Delegation in Australia Cornelis Keijzer said the war in Ukraine and Australia’s sanctions on Russia due to that conflict have brought Australia and the EU closer together. 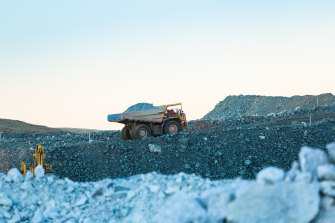 At the same time, he said the EU is looking to move away from relying on Russia for energy and raw materials and find other sources.

“Things like lithium, cobalt, critical materials, but also iron ore. We want to buy from Australia, no longer from Russia.”

Trade Minister Don Farrell said Australia would be very keen to supply critical minerals to the EU as part of the agreement.

“One of the things that I think we’ve learned over the last few years is that by having all your eggs in one basket, you put yourself in a precarious position,” he said.

Formal negotiations on a free trade deal between the EU and Australia began in 2018, but were stalled in part by the surprise axing of the French submarine contract.

Farrell, who recently spoke with European counterparts at the World Trade Organisation meeting in Geneva, said he was optimistic negotiations were heading in the right direction.

“Certainly the vibe coming from the Europeans is that they want to do this deal,” he said.

“The obstacles seem to have been removed: the climate change issue and the Naval [submarine] issue, that seems to have been put to one side. So I can’t see a reason why we can’t move full speed ahead on this.”

Keijzer said the EU also hopes for “decisive progress” on the deal by early 2023, but there is no set deadline.

“We are working on this very hard and hope to conclude a deal as soon as we can,” he said.

In the agreement, the EU is very keen to see Australian customs tariffs removed. Keijzer said EU products are the only ones subject to those tariffs out of Australia’s important trading partners, and they affect two-thirds of what the EU exports.

“That is still quite a commercial disadvantage compared to other trading partners that have such an agreement,” he said.

Farrell said that as well as essential raw materials Australia would like to export more meat and agricultural products to Europe, including beef and almonds.

“In terms of a provider of some of these very strategic raw materials, [Australia] is important,” he said.

“Australia is also important as a customer; we do sell a lot of goods in Australia. So there’s an interesting trading relation that can still be more developed, we think, especially as the Australian economy has a need for more diversified customers.”

Following a meeting between Albanese and his Spanish counterpart, planning is under way for Spain’s trade minister to visit Australia in July.

EU parliamentarians will also travel to Australia in September, and Farrell said the UK’s Trade Minister Anne-Marie Trevelyan is also planning a trip, which might include a stop at Farrell’s South Australian vineyard.

Farrell said finalising the UK trade deal is a top priority for when parliament returns at the end of July.

“It’s a good agreement, it will be good for both countries,” he said.