Tens of millions of people in Europe are suffering through the continent’s worst heatwave, which shattered records and sparked fires across the south before striking France, Germany and the United Kingdom where a national emergency has been declared.

“In certain zones in the south-west [of France], it will be an apocalypse of heat,” forecaster Francois Gourand of Meteo-France told AFP as the nation prepared for the onslaught. 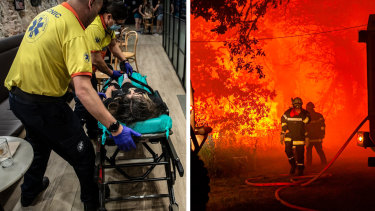 In the United Kingdom a state of emergency was declared as the Met Office issued its first “red warning” for dangerous temperatures on Monday and Tuesday, prompting hundreds of train services to be suspended and Luton airport to be closed due to damage to the runway, along with school closures and the suspension of some hospital services.

Temperatures surged above 40 degrees in parts of Germany and France, while Wales’ temperature record was broken twice in one day, reaching 37.1 degrees on Monday.

Normally, the UK is spared the worst impacts of heatwaves, which tend to develop over large landmasses rather than open water.

Temperatures in Portugal hit a July record of 47 degrees on Thursday last week, while wildfires broke out across parts of Spain.

More than 1000 deaths have been attributed to the heatwave in those countries as a landscape parched by drought allowed temperatures over Europe to reach new highs. Heatwaves are considered to be among the most dangerous extreme weather events because they linger over broad regions at length.

The heatwave hit as leaders of 40 nations and Australian representatives gathered in Berlin for the Petersberg Climate Dialogue, a key meeting in the leadup to the next round of COP talks in Egypt in November.

“We have a choice. Collective action or collective suicide. It is in our hands,” United Nations Secretary-General António Guterres said to the meeting in a video address that noted the widespread failure of world governments to meet climate commitments.

The meeting was overshadowed by a gas shortage caused by Russia’s invasion of Ukraine, which has forced some European nations to resume burning coal for energy, prompting increased emissions.

“As this meeting is taking place, parts of Europe are baking, indeed they’re burning; and sadly, it’s an experience that is all too familiar to many millions across the globe already,” Alok Sharma, the United Kingdom cabinet minister who led last year’s climate talks in Glasgow, said at the meeting. “My plea to you all is, please, let’s speed up our work.”

The northern summer has seen dangerous heatwaves strike around the world.

Between March and May heatwaves battered more than a billion people in India and Pakistan, accelerating forest fires in India and contributing to the collapse of a glacier, causing flooding in Pakistan.

Across the region crop yields fell by between 10 and 35 per cent, prompting the Indian government to reverse an earlier plan to supplement the global wheat supply that has been cut by the war in Ukraine, according to the scientific group World Weather Attribution.

In Texas over recent weeks heatwaves have driven energy use to their highest levels in history, causing the grid to be at risk of collapse, while on Tuesday the US National Weather Service warned that regions in across the south of the nation and into the upper midwest were at risk of dangerous heat levels.

Get to the heart of what’s happening with climate change and the environment. Our fortnightly Environment newsletter brings you the news, the issues and the solutions. Sign up here.