The author has never confirmed their identity – but you don't even need a pseudonym to know when you're reading an Elena Ferrante novel. There are the sentences that never seem to end; the language charged with carnality; the Naples that is dark yet alluring and the women characters fighting for air in a suffocating city.

The Italian writer's first novel in five years, The Lying Life of Adults, released this week, is a return to the world of Ferrante's Neapolitan quartet which started with 2012's My Brilliant Friend and has since been published in 45 languages, adapted into a HBO TV series and sold more than 15 million copies. In Australia, Ferrante's books have sold more than 220,000 copies. 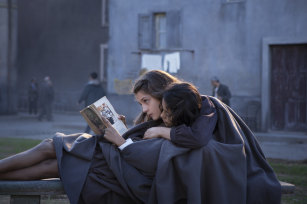 A still from the HBO TV series based on Elena Ferrante’s My Brilliant Friend. Credit: Supplied

While the writer has maintained anonymity in the face of rampant speculation, translator Ann Goldstein has attained a visibility rarely afforded to those in the profession. After submitting a sample of her work to publisher Europa Editions, the New York editor first translated Ferrante'sThe Days of Abandonment into English in 2005. The pair have a long-distance relationship; Goldstein never communicates directly with Ferrante.

"I just do my thing and then when I have questions, I ask the editors and they ask her. So it is kind of a three-way process," Goldstein said. While she doesn't keep up with the theories about Ferrante's identity, Goldstein thinks most readers have no burning desire to know. "I've sort of laid it to rest for myself, in the sense that I'm really not interested in who she is. I mean, to me, she's the person – I say she – she's the person who writes the books, whoever she is."

The biggest change for Goldstein when it came to translating Ferrante's new novel was tackling its teenage perspective, that of Giovanna, whose childhood illusions are crushed when she overhears her father say she is "getting the face" of his estranged sister Vittoria. Ferrante usually writes from the perspective of middle-aged women, and Goldstein said she found Giovanna an "unpleasant" character. While this novel also focuses far more on the upper echelons of Naples and unfolds in a restricted timeframe compared to the sweeping Neapolitan quartet, Goldstein said her process remained the same. 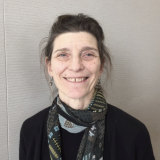 "Really, nothing affects my work. I just work. It didn't change the way I worked. It just might change the way I feel about what I'm doing a little bit," she said. "I would say that the difficulties were pretty similar to the difficulties of her other books, which is these kind of run-on sentences, which is one of the main ones. She writes those sentences that really want to get somewhere, and she doesn't want to stop in the middle. "

Readers too seem to unable to stop in the middle when it comes to reading Ferrante. Associate Professor Giorgia Alu, who teaches Italian studies at the University of Sydney, said the writer's cult status can be partly explained by how accessible the books are for foreign readers. Ferrante's Naples is rough but maintains an exotic appeal; there's little historical or political detail to bewilder; and the language is direct and simple with any Neapolitan dialect introduced in an approachable way.

"What for the traditional Italian literary world has been considered too accessible on the other hand it has worked especially at the foreign level, especially when she is translated into English," Dr Alu said.

The serialisation of Ferrante's novels as a quartet, Dr Alu said, also appeals to the way contemporary audiences consume media, including streaming television series. The public speculation about the author's identity has only added to Ferrante's place in the cultural conversation. "Elena Ferrante needs to be understood as a group project, as a collective project, where you have the author, the publisher, the translator, the people around her who nurture her invisibility and her anonymity," Dr Alu said.

While there are elements to The Lying Life of Adults that are fresh for Ferrante, the themes and style will be familiar to fans. While the Neapolitan quartet has entered the canon of world literature, Dr Alu wondered whether "Ferrante fervour" would remain high if the author didn't experiment in the future. For Goldstein, however, part of Ferrante's enduring attraction is the way she not only takes English-language readers into a world unfamiliar to them, but in doing so changes the way they think about their own worlds.

"There's a certain amount of identification that almost anybody can make, particularly women I guess, but I think men too," Goldstein said. "The way she examines relationships in a way that's very profound and kind of brutal, and I think even though you might not want to see these things in yourself or even in people you know, she sort of forces you to look at things in a different way."