A mother has been left concerned after her daughter’s stage school asked her for ‘darker make-up’ to perform in Aladdin for a Christmas play.

The Mumsnet user from Ireland, going by the name of SaltyPretzel, took to the forum to ask the community for advice after she was asked to provide ‘dark make-up’ for her daughter, eight, to take part in her stage school production of Aladdin.

In the post she explained: ‘I live in an area where there isn’t a lot of cultural diversity and this is the first time I’ve encountered an issue like this.

‘This really isn’t right is it? If it was just foundation I’d be OK with it, but this seems like he wants to make kids skin look darker.

‘The majority of the kids are Irish so are fairly pale – dark foundation just seems really wrong.’

Oher mums responded with their thoughts, with many agreeing that the request for darker make-up in a performance of Aladdin felt ‘inappropriate’, however others argued the request might have a logical explanation, so that the performers don’t look washed out unders strong lighting. 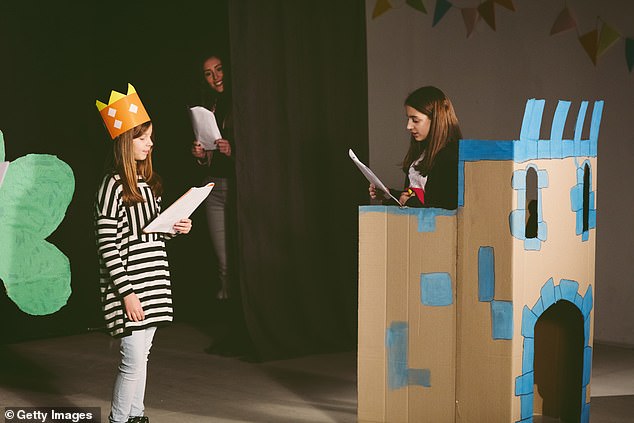 Explaining the situations, the worried mother said: ‘My daughter is in stage school and is performing in Aladdin in a few weeks.

‘She’s eight. Tonight an email went out about costumes and make-up.

‘Under make up was listed – dark foundation. In previous shows, make-up has just been listed as glitter.

‘I’m not overreacting am I? I don’t know whether to say something or just send her in with a bit of normal make up on.’ 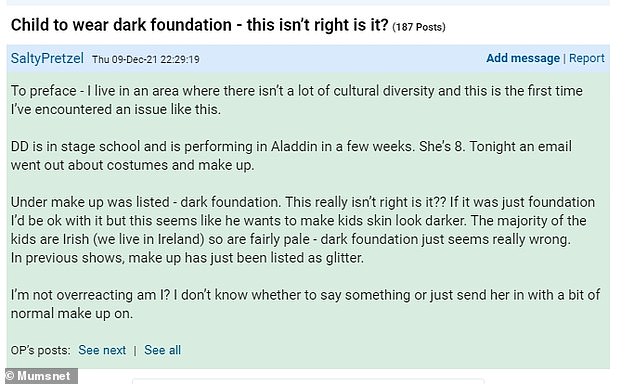 SaltyPretzel asked the users in the ‘Am I being unreasonable?’ thread on Mumsnet to see if her daughter’s stage school was wrong for asking her to provide darker makeup to perform

‘Just let the kids do Aladdin and be white.’

Another user added: ‘You’re right. Not only that, but even applying the most simple explanation, the children with their pale Irish skin would look so strange with dark foundation too.’

Several other mums responded with their thoughts with many agreeing that the request for darker makeup felt like it had racial reasons, possibly linking to the play being Aladdin

Another agreed: ‘Yikes! I would say something. I’d probably ask why the kids need dark foundation and make them spell it out…’

Some were noting that this feels like it held racial undertones, with Freecuthbert commenting: ‘Reminds me of blackface… it’s absolutely not okay and deemed very socially unacceptable and racist as far as I’m aware.

‘I would definitely say something in an e-mail as I find it highly inappropriate, especially as my child is mixed race, though I do find my views are representative of wider society. Race isn’t a bloody costume.’

A fellow parent said: I’d tell the stage school that I wouldn’t want my child in black face.’

However, some mums argued that stage cosmetics are often heavy, darker shades so that the make-up shows up under strong lighting.

Some mums arguied that stage cosmetics are often heavy, and requires darker colours to allow the makeup to be visible with the strong lights on them

One user said: ‘It could be for lighting – I remember wearing very orange foundation for pantos when l was a kid. I’d ask for clarification first.’

Another agreed: ‘Benefit of the doubt we were always told to wear dark foundation for Scottish Highland dance shows and everything else – just not to be washed out under the stage lights. Could that be what they mean?’

‘In theatre you usually wear darker make up on account of the stage lights washing you out,’ a fellow commenter chimed in.

‘Could they mean this? I always wore 2-3 shades darker if on stage.’