Best in show! Couple whose pet went missing were left stunned when she returned the next day with a ROSETTE from a rescue dog contest

A family who were worried sick when their dog disappeared were baffled when she returned the next day – wearing a rosette from a dog show.

Desperate to find their beloved pet, the couple enlisted their two daughters and close neighbours to help find her.

Paula, 48, called the police, vets and dog warden in a bid to locate Bonnie, whom she and Paul, 52, rescued from Crete four years ago. 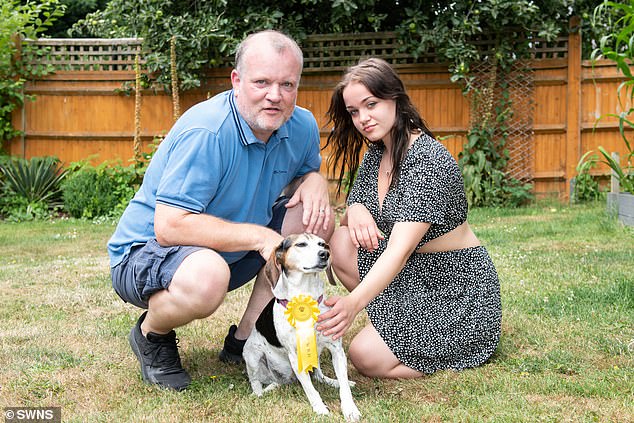 Peter Closier (pictured with Bonnie and his daughter Eva), was worried sick when Bonnie disappeared from the family home in Bolney, West Sussex, on Sunday morning 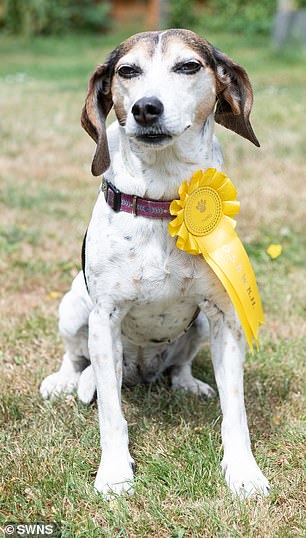 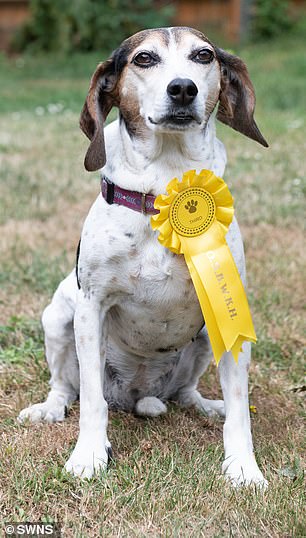 Bonnie, who is four years old, had a busy Sunday afternoon putting on a show for the judges at a dog competition in Surrey

Little did they know fellow dog owner John Wilmer had spotted the pet by the side of the road just minutes after she escaped as he took his two dogs to a show in Felbridge, Surrey.

Later that day Paula was relieved when she spotted a Facebook post from John asking for Bonnie’s owner to get in touch.

Once he knew Bonnie’s owners had been located, John decided to take Bonnie with him to the competition – and jokingly entered her into the Best Rescue Dog category.

The proud pooch impressed the judges and was awarded a third-place rosette.

Recalling their rollercoaster day Peter said they realised Bonnie had escaped at 11.45am when he went to feed her and the other family dog Cleo.

‘Bonnie is normally there first but she was not there,’ he said. 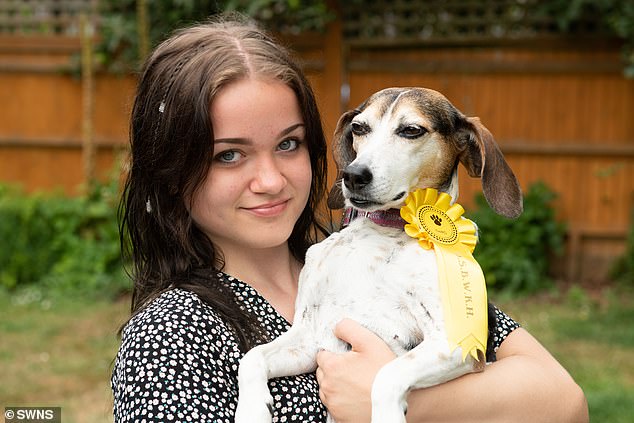 Bonnie (pictured being held by Peter and Paula’s daughter Eva) was rescued by the family from Crete, Greece when she was a year old 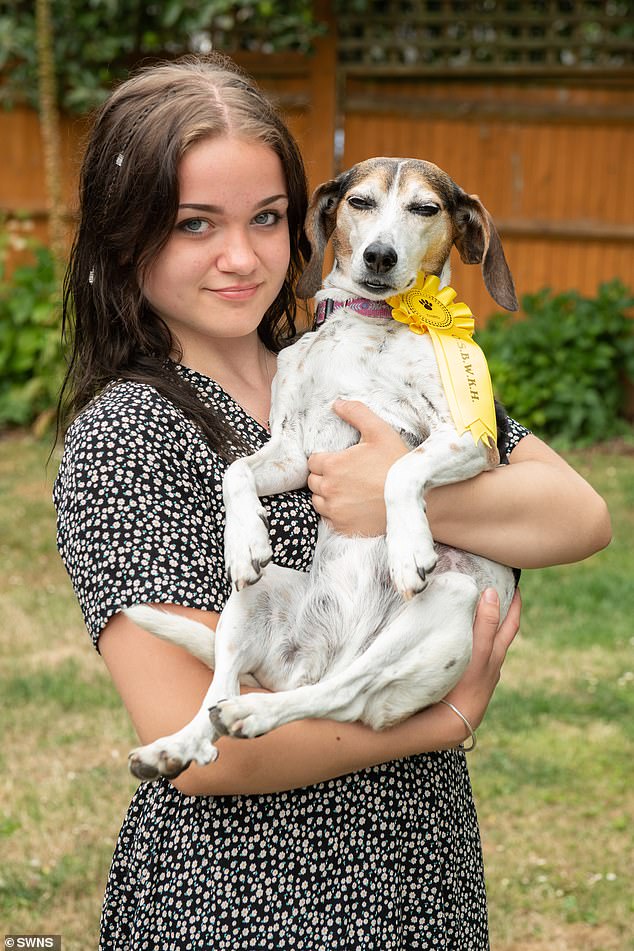 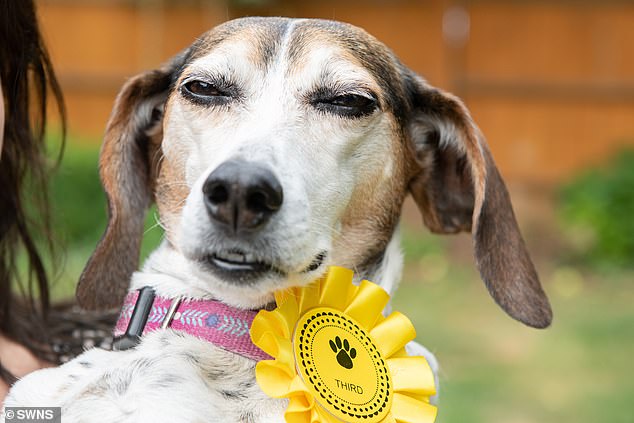 ‘We thought maybe she is not interested in food and did a full search of the house. I could not see her.

‘I was walking back to the kitchen when I saw the gate had swung and I thought, “oh no”.’

He explained the neighbours volunteered to help the family search around the area for Bonnie, with no idea at the time she was in safe hands.

‘All along she had been picked up by this guy who had seen her running along the side of the road,’ Peter said.

‘She had no collar on, we had taken it off the night before.

‘He must have picked her up within about five minutes of her getting out.

When Paula contacted John, he explained he had picked up Bonnie ‘within spitting distance’ of the family home, meaning she hadn’t got far. 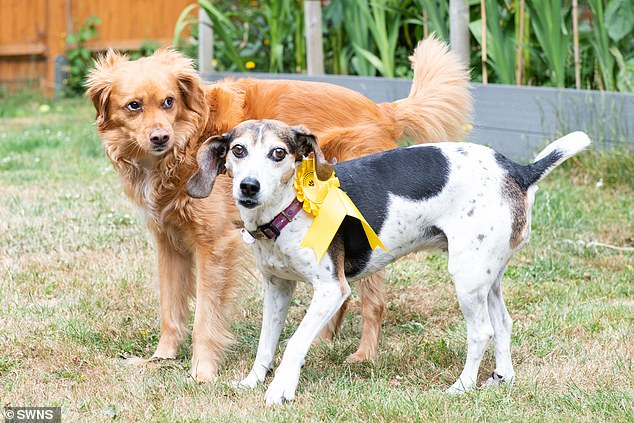 After Bonnie’s roaring success winning a rosette, her owner Peter suggested he and his wife Paula consider entering her in more competitions with Cleo 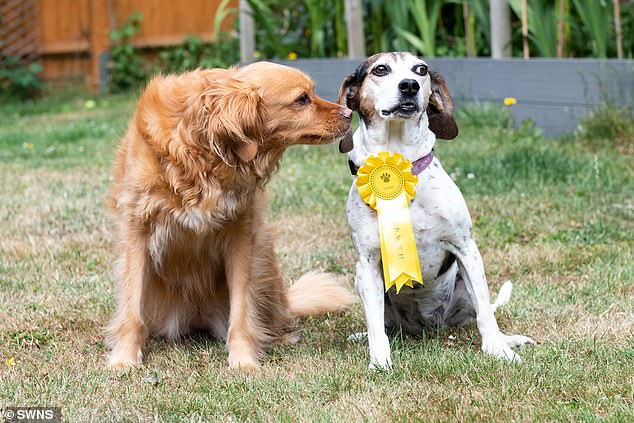 Bonnie lives alongside fellow rescue dog Cleo, who has taken part in two dog contests in the past

Peter added: ‘Bonnie was absolutely fine when she got back. She just thought she was having a great day out.

‘She knows she shouldn’t have run out in the morning.

‘I heard other dogs were going by [the house] that morning and so I think she escaped trying to follow other dogs.’

Bonnie’s sister Cleo has won three rosettes at dog shows for Greek dogs but the couple, who are both dental technicians, had never entered Bonnie into any competitions.

Peter added: ‘We never pursued it with Bonnie. We should do now.

‘When she was missing I had five different outcomes in my head, the best being that she came back.

‘This was even better than that, she came back with a rosette.’