“Do you wanna build a snowman?”

It’s a resounding yes from Sydney. The Australian premiere of Disney’s Frozen opens with a blast of spectacle, storytelling and theatrical magic, made more poignant by the fact that it’s playing to a masked audience. Yes, it’s escapist. Yes, it’s a fairytale. Yes, it’s played with a brassy American twang. But it’s also executed with the kind of professionalism, athleticism, creativity and heart that reminds us how much we’ve missed live performance, and how glad we are to have it back. 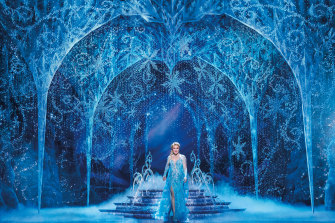 You probably know the story: two young princesses, Elsa and Anna, are playing together one night when Elsa discovers the dangerous side of her curious ability to create snow on demand. Scared of what she might do, her parents shut her away and keep her and her sister Anna apart. When Elsa comes of age and is crowned Queen the palace reopens with a grand ball, at which Anna meets Hans, the man of her dreams. When she asks Elsa for permission to marry, Elsa again unleashes her icy powers, shattering Anna’s dreams and plunging the kingdom into eternal winter. Refusing to condemn her sister, Anna sets out on a quest across the glacial plains to save Elsa and discover the meaning of love.

Frozen the musical is not an adaptation of the animated movie. As with other Disney musicals, such as The Lion King, the stage version goes far beyond the original movie, reimagining the story with new material, new scenes and an artfully-paced book (by the original writer and director Jennifer Lee). As a result the action skips along from dance number to intimate duet to show-stopping solo with seamless grace. Set transformations and costume changes happen on the fly, often in front of our eyes, as an integrated part of the magic, and the special effects, while spectacular, never upstage the story. 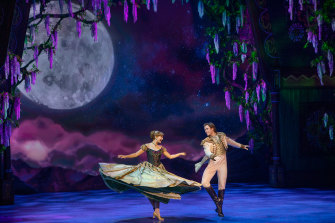 Central to the show’s impact is the tight ensemble who, with the help of splendid costumes (Christopher Oram) and cracking dance routines (Rob Ashford), transport us from the waltzes and tangos of the ballroom, to the thrilling stomp of the hidden folk, to the hilarious soft snow shuffle of the sauna.

The Australian cast takes to the winter wonderland of Frozen like ducks to water – or, should I say, penguins to ice. Thomas McGuane is a slick and seductive Hans, while Sean Sinclair, as Kristoff, is a rough-edged sweetie, and both of them dance like a dream. Deeana Cheong Foo is a self-possessed Young Elsa, while Jemma Rix inhabits the complex role of adult Elsa, at first with chilly dignity, and then with explosive flair as she smashes the show’s hit number. Meanwhile Matt Lee, as the snowman Olaf, manages to sing, dance, act and operate a complicated puppet in a dazzling display of showmanship. 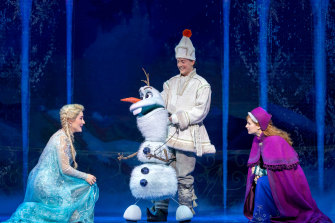 While Elsa and Olaf give her a run for her money, Anna steals the show from the very first scene. Chloe Delle-Vedove is a wriggly, effervescent Young Anna and, as adult Anna, Courtney Monsma maintains this playful glee and wriggliness – especially useful when you have to perform multiple lightning costume and wig changes, sometimes while singing and dancing. With her cheeky backward glances and her soaring voice, she’s utterly captivating.

It’s tempting to observe how the Disney model of an ur-musical translated around the world is, ultimately, an unapologetic outbreak of cultural colonialism. But that would be devaluing the sheer joy of a beautifully-made, spectacularly performed piece of theatre. No need to apologise when it is this entertaining. Let it go.