Lucasfilm, a unit of Walt Disney, said it has no plans to work in the future with Gina Carano, The Mandalorian star who posted comments on social media that many criticised as anti-Semitic.

“Gina Carano is not currently employed by Lucasfilm and there are no plans for her to be in the future,” the company said in a February 10 statement. “Nevertheless, her social media posts denigrating people based on their cultural and religious identities are abhorrent and unacceptable.” 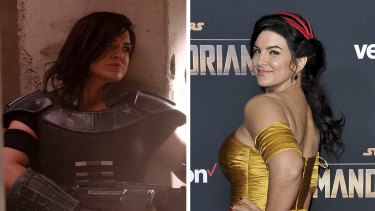 Gina Carano has been dropped from “The Mandalorian” cast after her social media post likened the experience of Jews during the Holocaust to the US political climate. Credit:AP

One image she posted on Instagram, since deleted, included that of a half-naked woman being chased down the street during the Holocaust, according to entertainment website Deadline.

“Jews were beaten in the streets, not by Nazi soldiers but by their neighbours … even by children,” Carano wrote. “Because history is edited, most people today don’t realise that to get to the point where Nazi soldiers could easily round up thousands of Jews, the government first made their own neighbours hate them simply for being Jews. How is that any different from hating someone for their political views.”

Her talent agency, United Talent Agency, and publicity firm, ID Public Relations, both said they are no longer working with her.

On Twitter, the hashtag #FireGinaCarano was trending, with users posting comments mostly criticising her.

A mixed martial arts fighter who transitioned into a TV career, Carano had been one of the stars of The Mandalorian, the first-live action show based in the Star Wars universe and a runaway hit for the company’s new Disney+ streaming service.

Playing former rebel soldier Cara Dune, Carano had been featured in both seasons of the show as the mercenary sidekick of the title character (played by Pedro Pascal), who is on a mission to keep Grogu (aka Baby Yoda) safe from Imperial forces hunting the tiny alien creature.

Pascal, whose sister recently came out as a trans woman, assisted Carano last year after she mocked people putting gender pronouns in their social bios by adding “boop/bop/beep” to her Twitter profile.

Carano said her co-star helped her understand why they were important. “I didn’t know before but I do now,” she wrote on Twitter at the time, adding that she stood against bullying, “especially the most vulnerable.”

Carano has previously come under fire for posts on Twitter in November in which she derided mask-wearing amid the COVID-19 pandemic. In a different tweet that month she also claimed there had been voter fraud during the 2020 presidential election.

Lucasfilm had planned to unveil Carano as the star of her own Disney+ series, but dropped those plans after her November tweets, the Hollywood Reporter said, citing unnamed sources.

In an interview last month with a video blogger who goes by the name Drunk 3PO, Carano said: “I’m going to stick around, and if my presence bothers you, OK, but also a lot of people are not bothered by my Twitter presence or my social-media presence. So I focus more on those people. I bring the fire out in people. I’m not sure why.”