Three crossbenchers have backed calls to let first-home buyers tap their superannuation for a deposit amid an ongoing debate about whether the nation's $3 trillion retirement savings pool should be used to bolster home ownership.

One Nation leader Pauline Hanson, Centre Alliance's Stirling Griff and independent senator Rex Patrick said on Tuesday they would be open to changes to the super system to help renters enter the property market by accessing their retirement savings early. 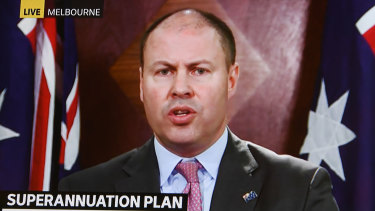 Treasurer Josh Frydenberg would likely have support for measures to allow first-home buyers to dip into their superannuation.Credit:AFR

A growing number of Coalition MPs are urging cabinet to prioritise home ownership over super savings following the release of the government's 638-page review of the retirement income system led by former senior Treasury official Mark Callaghan. The review did not make any findings about releasing super savings early to buy a house but does refer to the financial advantage of owning a home in retirement.

The Morrison government is yet to respond to the review and is expected to consider other incentives to buy homes such as extending the $25,000 HomeBuilder grants scheme that runs between June and the end of December. A source close to the government said the future of the scheme would be discussed at a meeting of the influential Expenditure Review Committee – made up of senior cabinet ministers – on Thursday.

The crossbenchers' comments indicate the government could have enough support in the Senate to achieve changes to the retirement system but Treasurer Josh Frydenberg and Assistant Minister for Superannuation Jane Hume have given no indication they are planning major reforms to superannuation. Labor and the superannuation industry oppose the early release of super for housing, arguing young people would be worse off over time.

Senator Hanson strongly backed giving first-time buyers access but wanted financial advice to be provided beforehand. "I support the idea of home buyers having an option to withdraw funds from their superannuation accounts to use as a deposit for a home loan," she said.

But she warned superannuation balances would take a hit and a withdrawal of $20,000 by a 25 year old could translate to $80,000 less in retirement and extra pension payments from government coffers.

"Any withdrawal from a super account for a home loan should be used only for the purchase of a primary residence, not for an investment property," she said. "If the primary residence is subsequently sold, the funds should only go towards a replacement house purchase or otherwise be returned to the superannuation account."

Senator Griff said the idea had "merit" due to the importance of home ownership for financial stability.

"As a forced saving scheme, particularly for younger people, I think super works very well," Senator Griff said. "But the biggest asset and the most important asset that most people have is their home and that gives a great degree of certainty when they retire … It makes sense to give people a kickstart with that."

Senator Patrick said he hadn't given it "detailed consideration" but generally supported a scheme to let struggling first-time buyers access these funds, provided safeguards were in place.

"Superannuation belongs to the contributor and I think the ability to purchase a home using super should be examined," Senator Patrick said, adding he wanted limits to stop buyers from being able to sell a short time later and strip the funds out. He also supported a shared ownership arrangement with first-home buyers and super funds, which could see interest paid to the fund.

A spokesman for independent senator Jacqui Lambie said she did not yet have a position. One Nation's Malcolm Roberts did not respond to a request for comment.

The idea has been backed by former Reserve Bank governor Bernie Fraser, who has previously appeared in ads for super lobby groups and acted as a director for major super funds. However, Labor leader Anthony Albanese said on Tuesday he did not think super should be used for housing, reflecting comments by former prime ministers Paul Keating and Kevin Rudd.

"One, it would drive up home prices and that wouldn't be a good thing," Mr Albanese said. "Secondly, once you undermine the compulsory elements of superannuation and the whole basis of it being for an income during retirement … then you end up opening it up [to be weakened further]."

Greens leader Adam Bandt also opposes the idea, saying it was looking in "the wrong place" to solve the housing affordability problem.

"If the Liberals were serious then we would stop inflating housing prices with ridiculous tax concessions that cost the budget millions of dollars and put the cost of housing out of the reach of home buyers," Mr Bandt said.

Former RBA researcher Peter Tulip, chief economist for the Centre of Independent Studies, said home ownership was "unnecessarily difficult" and families had to save a 20 per cent deposit on top of putting aside funds for super. However, rather than withdrawing funds directly from super he said they could be used as collateral for a loan, allowing buyers to purchase with a smaller deposit.

"Banks have a very understandable and sensible need for security, which using superannuation as a collateral provides them. You can achieve the banks' objectives and the home owners' objectives at very little cost," Dr Tulip said. "What's different when using superannuation as collateral instead of a withdrawal is if you let people withdraw, they have a strong incentive to do that and bypass the system."