Both emphasised that the Attorney-General was entitled to a presumption of innocence. 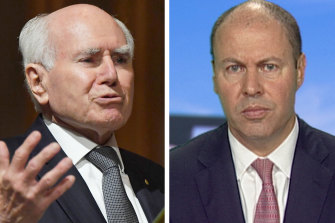 "I agree with the handling of this very difficult and sensitive issue by the Prime Minister and minister," Mr Howard said on 2GB radio in Sydney.

Mr Frydenberg said he could see the "anguish" on Mr Porter's face when he addressed a press conference on Wednesday but said he disagreed with calls for Mr Porter to step down.

“Australians — whether it’s Christian Porter or yourself or myself or any other Australian citizen — are entitled to the presumption of innocence,” Mr Frydenberg said on Nine’s Today show.

On Wednesday, Mr Porter categorically denied all allegations against him, which included a claim that he had raped a young woman in 1988 who took her own life last year.

That did not stop calls for an inquiry, with independent MPs calling for one to clear the air and ensure the top law officer of Australia was beyond reproach.

NSW Police closed its investigation into the woman’s allegations this week. SA Police are investigating her death on behalf of the coroner.