I woke up this morning admiring winter’s quiet beauty. What’s left of it. The leaf blowers have been in hibernation but with spring almost upon us, it’s only a matter of time before they stir. Their roar is a more reliable indicator of the change of seasons these days than any confused bud or bird.

Our neighbour J is probably giving his machine the once-over right now, ready for the spring winds. Winters must be agony for him, although fortunately it takes only a smattering of leaves for any committed owner to haul out the blower and have a good old go at disturbing as much of the neighbourhood as possible, for as long as possible, as soon as possible (official legal starting time in NSW, incidentally, is 7am on weekdays, 8am on Sundays and public holidays).

It’s like they have to keep on top of any leafy material whatsoever or chaos will surely follow. And like Mormons, they love to make a convert. 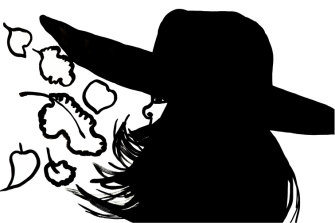 Perils of the leaf blower.Credit:Christina Zimpel

One afternoon this past autumn, for example, I was out admiring the shimmering carpet of brilliant russet leaves our deciduous tree had dropped gracefully onto our nature strip, when J strolled over from up the street.

J is a lovely neighbour but he’s also the closest thing the street has to a one-man Neighbourhood Watch, selflessly on patrol and in search of a little action, as the newly retired so often are. He had his leaf blower slung low in one hand like a shotgun. He looked personally offended by the leaves.

“Made a hell of a mess, haven’t they. Noticed that yesterday. You want to get yourself one of these,” he said, waving his machine.

“I’m leaving them there, actually. Food and mulch for the tree. And they look so beautiful,” I said, Vita Sackville-West to his Dirty Harry.

It’s not the first time he’s tried to talk me into a leaf blower. The people who love using leaf blowers don’t seem to get that there are other people – most people – who loathe them. In trying to foist one on our household, I can only think J must have missed the endless anti-leaf blower diatribes from the gentry, the letters to the editor, the outraged items in Column 8, the tut-tutting, the community pleas for councils to ban them, Elizabeth Farrelly calling them “egregious, despicable and morally inexcusable” (bit strong, EF, but I hear you).

Aside from jet skis, I can’t think of many small machines that have caused as much ongoing fuming, in both senses of the word. When the council crew come down with their two-stroke petrol versions, the smell drifts through our bedroom window like a pungent summer breeze made up of hydrocarbons and carbon monoxide. Hours later, a slow-moving, noisy truck spurts exhaust as it trundles down to suck up the piled leaves as best it can. By then, of course, most of the leaves have blown back to the gutter.

I’m not the first to observe the staggering inefficiency of the leaf blower as a marshaller of leaves. That’s what’s so infuriating. Everyone knows they’re hopeless at this simple task – the only task they have, in fact – so why are they still here?

I put all this to Will last time the council workers were shattering the silence just after 7am. Outside, I could see a couple of blokes in earmuffs mindlessly blowing up great whirlwinds of dust and pollen and pulverised dogshit that hung about like lazy cumulus in no hurry to get scudding.

Why not ask them to give up their leaf blowers, mention the transience of life, etc, and see how you go?

Couldn’t they go back to using rakes and brooms? Wasn’t going to happen, Will said. Once you’d given a worker a machine, you’d upgraded his job.

“It’s about the dignity of labour,” he said. “With a machine, you’ve given those workers technological status. They’re no longer the ‘horny-handed sons of toil’, or whatever that old expression was.”

I said I couldn’t see there was much dignity in swinging about a deafening, dust-creating machine, even if it was in a very phallic way, talking about “horny-handed”. A rake and a broom were so much healthier and more serene, surely, and effective? Think about those Japanese sand gardens. All that beauty and meditation on the transience of life and the seasons, in blissful silence.

Will suggested I take it up with the council guys across the road. “Here’s a rake and a broom,” he said. “Why not ask them to give up their leaf blowers, mention the transience of life, etc, and see how you go?”

Well, I just might, next time they’re around. Assuming I can make myself heard above the roar.