DAN HODGES: We must have a grown-up debate about Covid, culture and race – or thousands more will die

The cartoon was striking. A hapless Boris Johnson belatedly locking a barn door with a giant syringe, as an army of green Covid mutants ran amok behind him. ‘Border Farce’, said a sign drawn on the side of the ramshackle stable.

But even more significant than the message was the messenger.

The attack on the Prime Minister for being insufficiently swift in closing the nation’s borders appeared in Monday’s Guardian. The in-flight magazine of the liberal elite was castigating a Conservative government for failing to construct Fortress Britain.

It was an image that again exposed the hypocrisy of Britain’s self-styled progressives. When Sajid Javid and Priti Patel moved to end the cross-Channel trade in human misery, there was outrage. 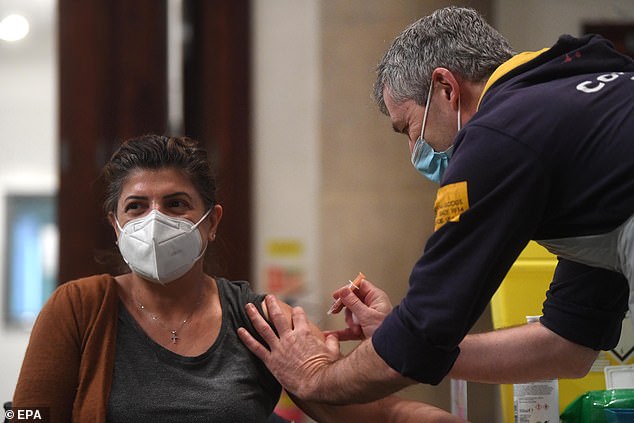 Then Covid arrived, and it suddenly became clear it wouldn’t just be Dover and Folkestone that bore the impact of a vaccine-busting coronavirus strain. At which point the plea for openness and tolerance was replaced with a demand to rapidly slam down the shutters.

But it has also highlighted another issue. Do we actually want an honest conversation about Covid, immigration and race? At the start of the pandemic, the answer was No. It was a national crisis and we would confront it together.

But then attitudes shifted. There was evidence that Britain’s black and Asian communities were being disproportionately impacted by the pandemic.

A public inquiry was called for. London Mayor Sadiq Khan claimed the Government needed to look at the link between Covid deaths and ‘a hostile environment’ created by Ministers.

Matt Hancock said the concerns were ‘particularly timely’ because ‘right across the world, people are angry about racial injustice. And I get that. Black lives matter’.

But then the debate shifted again.

As the Government embarked on its whack-a-mole strategy, people began to perceive a connection between areas with large ethnic-minority communities and higher rates of Covid.

Tory MP Craig Whittaker broke cover, and claimed Test And Trace data showed that members of the Muslim community within his Calder Valley constituency were ‘not taking the pandemic seriously enough’.

Whittaker was duly pounced upon. Drawing a link between Covid and ethnicity was now deemed unacceptable. He was branded a racist.

That was until a few weeks later, when Greater Manchester Police suddenly declared a ‘major incident’ as a result of soaring infections in its region. The biggest increase in rates were, according to local health officials, within the white community.

‘Manchester Covid outbreak “a warning to complacent white middle class”,’ screamed the headlines. Linking Covid and race was now legitimate after all.

The reality is that the truth about the spread and impact of Covid within Britain’s ethnic-minority communities is complex. 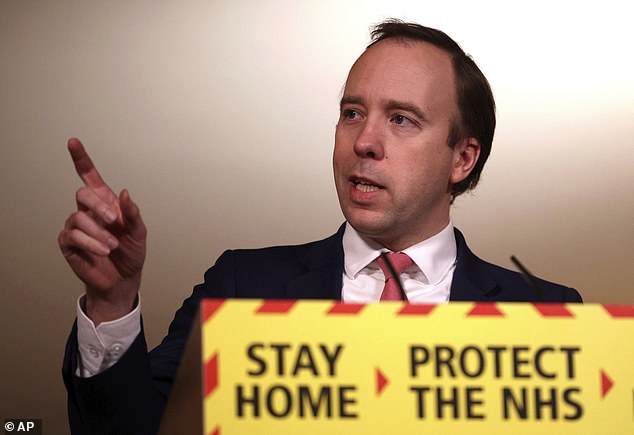 Matt Hancock said the concerns were ‘particularly timely’ because ‘right across the world, people are angry about racial injustice

For example, the latest Government data shows that during the first wave, the risk of death from Covid was greater for all minority ethnic groups.

In the second wave this was true only for those of Bangladeshi, Indian and Pakistani heritage. But some facts are uncontested. Infection rates and deaths have indeed been higher among Britain’s ethnic minorities, sometimes to a staggering level.

One Minister told me they have data showing infection rates of 67 per cent within the Orthodox Jewish community.

A number of the reasons for this disparity align comfortably with progressive sentiment. Low-income households. Poor-quality, high-density housing. Low-wage employment, where there is no opportunity to work from home.

But a number of others do not.

Cultural issues surrounding isolating and social distancing. An inability of non-English-speakers to understand Covid safety and health advice. An attempt to lump all ethnic-minority groups under a single convenient heading of ‘BAME’, and engage with them accordingly.

Workplace tensions created by a backlash against risk-assessments focused on black and Asian workers.

But regardless of these facts, the terms of the discourse have been set. So long as the discussion about Covid and ethnicity can be channelled through the prism of overt or structural racism, everything is fine. But as soon it strays towards cultural factors within the impacted communities themselves, a conspiracy of silence descends.

All of which would be another frustrating, but fairly typical, example of our skewed modern dialogue over race. Except for this. That conspiracy of silence is now leading us towards a catastrophe of silence.

Everyone has been lauding the vaccine rollout. But the vaccination figures within the black and Asian community are horrific. Black vaccine take-up is half of that of the white community. In the Asian community it’s two-thirds.

But again, these basic facts have to be channelled through a prism of political correctness. A BMJ report last week hit the usual liberal tropes. An erosion of trust through ‘systemic racism and discrimination’. ‘Previous unethical healthcare research in black populations’. ‘Negative experiences within a culturally insensitive healthcare system’. These, the paper claimed, were all ‘legitimate concerns’, before helpfully adding that a failure of public health messaging meant ‘vaccine hesitancy’ was a ‘legitimate viewpoint’.

It’s not a legitimate viewpoint. And the primary failure of public health messaging is now from those progressives who – in a reckless and self-serving effort to paraded their anti-racist credentials – keep pretending it is. This morning Britain’s black and Asian communities find themselves at the centre of a propaganda double whammy. From the anti-vaxxers who are targeting them as part of their deranged campaign. And from the preening liberals who want to use Covid as the latest super-weapon in World War Woke.

The anti-vaxxers are beyond reason. So the only hope is that for once in their lives the self-styled progressives will shut up, take a step back and stop infantilising Britain’s ethnic minorities. And grasp these three realities.

First, that time is almost up. On June 21, lockdown will end. The country will reopen. And at that moment any community – regardless of colour or creed – that has turned its back on the vaccine will have issued an open invitation for Covid to come ripping through it.

The second is that the cavalry is not coming over the hill. There will be no preferential treatment for anyone. Those who have been calling for black and Asian communities to be raised up the vaccine priority list, or for door-to-door vaccinations to reach economically and racially disadvantaged households, can save their breath. The opportunity for vaccination is there for all. And Boris Johnson and his Ministers are only too well aware of the political implications of being seen to change the rules now.

The final reality is this. The only way to defeat the anti-vax propagandists is the way we always defeat propaganda – with hard truths and harder facts. And this is the hard truth that needs to be delivered. Every single one of us who can, needs to take the vaccine. We live in a free society, one that will stop short of legal compulsion. But despite that – indeed because of it – we each have an even greater obligation to ourselves and to our neighbours.

There can be no excuses. No cultural excuse. No historic excuse. No religious excuse.

Because if people try to rationalise and embrace the argument that ‘vaccine hesitancy is legitimate’, then people are going to die. Some of those who reject the vaccine will die. Some members of their family will die. And a lot of people in their communities will die. This is the message that needs to be delivered. To black and Asian Britain, just as it has to be delivered to everyone else.

In 2021, we will not pursue multiculturalism at the expense of thousands of needless Covid deaths. And if we don’t explain that patiently and clearly, but instead choose at this life-or-death moment to again suffocate our ethnic minorities beneath a blanket of victimhood, then Matt Hancock will have been proven wrong. Black lives won’t matter after all.