And just as they get used to a return to relative normality, theatre and concert goers will once again have to wear masks during performances. 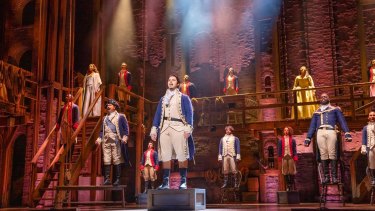 The hit musical Hamilton will play to 50 per cent capacity audiences.

One of the first casualties of the new rules has been the Sydney Theatre Company’s production of Grand Horizons, starring John Bell, which has been attracting rave reviews since opening at the Roslyn Packer Theatre on June 11.

STC management has been unable to re-allocate seating in time and cancelled Wednesday night’s performance.

A spokesman said there would be an update on the remainder of the season “in due course”.

Meanwhile, the hit musical Hamilton, which opened at the Sydney Lyric Theatre on March 27 will play to 50 per cent capacity audiences until June 30. Ticket holders are being contacted and offered refunds, while those who can’t attend because of the regulations have been asked to contact Ticketmaster.

The Australian Chamber Orchestra has suffered a double blow. Earlier this month it was forced to cancel outright its Baroque Revelry concert series in Melbourne. Billed as “a fun and sordid musical romp through Baroque Europe”, the series opens at Sydney’s City Recital Hall on Saturday but ticket sales have been suspended and the concerts will proceed at 50 per cent capacity.

Opera Australia’s productions of Aida at the Joan Sutherland Theatre will be reduced to 50 per cent capacity as will the musical Come From Away at the Capitol.