It's why corporate-speak extols the term "team". Humans find collaboration exhilarating when it works, and mounting a show together is among the biggest highs of all. The ultimate magic of Louis Nowra's 1992 play is its ability to communicate this joy, and then compound it (without overly sweetening it) by making the people putting on the show such improbable collaborators.

His play-within-a-play is like setting up two mirrors facing each other, so this crazy, unpredictable, infuriating, thrilling activity called collaboration is infinitely reflected between them. The nine actors in this joint Sydney Theatre Company/Melbourne Theatre Company production, directed by Sarah Goodes, share the pleasure of mounting a show about the joys and pitfalls of an amateur production. The show-within-the-show was to be Mozart's Cosi fan tutte, except none of the amateurs could sing it, so the opera is stripped to a play. Thickening things, Nowra's amateurs are inmates of a mental institution, several of whom are magnificent, almost Dickensian creations: laughing, crying, sweating, bleeding, loving, hating eccentrics, only one of whom has supposedly trodden the boards before. 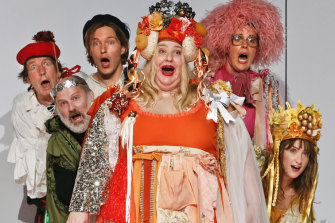 So why is this production not even stronger than it is? A sliver of the answer lies at Nowra's door, in that (perhaps infected by the play's autobiographical backdrop) Lewis, Nick, Lucy and Justin – the four non-inmate characters – are vastly less interesting as the seven who are, and much more likely to mouth platitudes. The rest is down to Goodes and her actors encountering a challenging play to get right. Exaggerate the inmates' characterisations and you cheapen the work with loony cartoons; underplay the others and they are simply dull.

You see how glorious it could have been from the portrayals that work almost perfectly. Topping these is Bessie Holland's Cherry, whose no-nonsense approach to love, food, acting, violence and power relationships comprehensively inverts the depiction of women within the opera. Holland's captivating performance is replete with spearing truth, abundant laughs and poignancy. Then comes Robert Menzies' manic Roy, the self-claimed thespian who chose Cosi fan tutte. His love for the opera's sublime music and transformative powers is a contagion, and Menzies superbly delivers the childhood reverie that supposedly explains this love, so that, as Nowra intended, it's like a key-change in a score. On Roy, too, lies the greatest weight of sadness, and Menzies misses precious few grams of this. 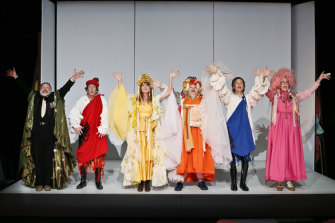 Katherine Tonkin realises the endearingly obsessive-compulsive Ruth, who can memorise everyone else's lines, yet be stumped by how many paces she takes across the stage before delivering a line of her own. Esther Hannaford intermittently fully grasps the elusive Julie, that rare but not-unknown creature: a sweet-natured junkie. Glenn Hazeldine's Henry strays into cartoon land, when, if pulled back, he should be the most affecting of the inmates. Rahel Romahn's pyromaniac Doug is more effective, although could still be toned down, as could Gabriel Fancourt's addled Zac, the musician.

Sean Keenan's Lewis, the amateur director, is likeable enough but lacks the sense of inner steel that makes it credible he would survive the gruelling process. Nowra's text delights in bagging directors, and Fancourt's other role, Nick, is played too close to this stereotyping, while Hannaford's Lucy and George Zhao's Justin are just phantasms, partly due to the writing.

Dale Ferguson's set is a particular strength. His vision of a burnt-out theatre lets in slivers of light in the blackouts, echoing Leonard Cohen's observation about there being a crack in everything.