It turns out you can’t tell a dingo from the colour of its pelt, with almost half of the wild dogs surveyed in south-eastern Australia carrying a hue other than the ginger usually associated with the animal.

Research published on Monday in the Journal of Zoology found that of 1325 wild canids – the family of animals taking in wolves, dingoes and your pet pooch – only 53 per cent sported ginger coats. 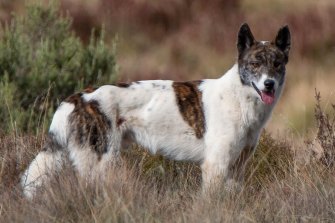 Researchers have found that only about half of dingoes in south-eastern Australia have the ginger-coloured coats most of us would associate with the animal.Credit:Michelle J Photography Cooma

About three-quarters of the animals sampled in NSW, Victoria and the ACT had some domestic dog ancestry, while a quarter had no evidence of mixing with domestic dogs. Less than 1.5 per cent had no dingo ancestry.

“People have a very fixed idea about what’s a dingo,” said Kylie Cairns, a conservation biologist at the University of NSW’s Centre for Ecosystem Science, and one of the report’s authors. “There is more variation in coat colour than we thought.”

The findings may have implications for so-called wild-dog suppression efforts that are supported by farming groups and governments.

The widespread poisoning or culling may be picking off animals that are either pure-bred or mostly dingo stock. 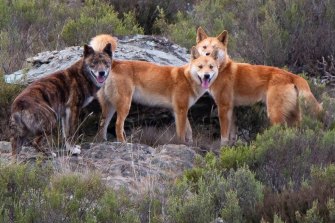 The paper noted that dingoes were “poorly described by early European explorers”, with only basic descriptions such as “yellow-dog” or “red with some white about it”, but also black, white and tawny mentioned.

Dr Cairns said the evidence suggests dingoes may have been present in Australia as long as 11,000 years.

Two relatively distinct populations can be found, with as many as 90 per cent of the animals in northern, western and central Australia sporting ginger pelts.

Those dingoes also tend to be taller than the smaller and more varied-coloured animals found in the south-east.

What is less clear, though, is how much of the colour variation originates with the pre-colonial dingoes and how much as been introduced since following their mixing with more recent dog imports.

The paper noted such so-called introgression of traits is evident from dogs introduced into North America from Siberia between 1500 and 7200 years ago and wolves.

The introduction of black-coat colouration from the dogs appears to have “conferred some advantage, in the form of increased immunity, leading to its rapid spread throughout the North American wolf population”, the paper found. 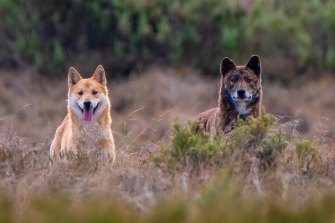 How much is ancestral and how much is hybridisation? Researchers are yet to determine what role recent mixing has in creating the different colour coats of dingoes.Credit:Michelle J Photography Cooma

“It is important to note here that black wolves are still considered to be wolves not wolf-dog hybrids,” the researchers including from Melbourne and Sydney universities wrote. “This raises the question of whether coat colour is an effective and useful tool for field assessment of dingoes in Australia, particularly if coat colours may reflect historical introgression.”

The issue of wild-dog baiting has long been contentious with concerns from some ecologists flaring after last summer’s bushfires. Governments, including in NSW, have resorted to increased dropping of lethal sodium monofluoroacetate (commonly known as 1080) poison to suppress populations.

Last September, the Berejiklian government announced the construction of the “world’s long wild dog fence” stretching the existing barrier along the borders with Queensland and South Australia by 742 kilometres at the cost of $37.5 million.

“Wild dogs are a plague on primary producers and their local communities, causing more than $22 million in damages and lost production in NSW every year,” Agriculture Minister Adam Marshall said at the time.

Dr Cairns, though, said the program to eradicate the dogs likely had unintended effects on wildlife and its ability to recovery from the devastating bushfires quite apart from the effect on the dingoes themselves.

Dingoes were apex predators that help keep ecosystems in balance, such as restraining the numbers of large herbivores such as kangaroos, but also suppressing numbers of invasive animals from pigs to deer, rabbits and even foxes. Dingoes also disturb feral cats, another major threat to wildlife, she said.