Former prime minister Malcolm Turnbull has warned Australia will need to develop a nuclear industry to maintain its proposed fleet of submarines and lashed his successor, Scott Morrison, for not being upfront with France over its decision to dump a $90 billion contract.

Mr Turnbull, who chose Paris in 2016 to build a fleet of 12 conventionally powered submarines, said the government should have explored the possibility of building a nuclear-powered fleet using low-enriched uranium with France and the United States. 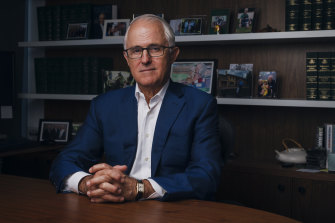 He suggested the French nuclear technology had “safety and non-proliferation advantages” over the weapons-grade uranium used in American and British submarines and accused the federal government of running a “clumsy, deceitful and costly” process.

“Safety and sovereignty dictate that we will need to develop nuclear facilities in Australia to maintain and support these submarines,” Mr Turnbull wrote in an opinion piece for The Sydney Morning Herald and The Age.

Mr Morrison announced the shock decision to dump the French deal two weeks ago and instead use American and British technology to develop a fleet of nuclear-powered submarines as part of a new defence pact named AUKUS.

The move, designed to present a more forceful posture amid increased Chinese aggression in the Indo-Pacific, enraged France and sparked warnings from Beijing that regional stability would be undermined.

While developing a nuclear-powered fleet by 2040 would be a “good development”, Mr Turnbull said the “hyperbole around the new AUKUS partnership has been dialled up to 11″.

“With the swirl of media sound bites, the impression has been created that the Australian government has replaced a diesel/electric French-designed submarine for a nuclear-powered American or British one. This is not the case,” Mr Turnbull said.

“Australia now has no new submarine program at all. We have cancelled the one we had with France and have a statement of intent with the UK and the US to examine the prospect of acquiring nuclear-powered submarines.”

While the nuclear option will deliver Australia considerable advantages in weapons storage, speed and endurance, the first of the submarines may not be in the water until 2040 – six years later than the first French boat was scheduled to be built.

The federal government decided to ditch the French deal and go with the AUKUS agreement on the basis that the US and Britain use highly enriched uranium, which means the submarine’s reactors never need to be refuelled. If Australia were to build nuclear-powered submarines with the French, the nuclear fuel in the core of the boat’s reactors would have to be replaced every 10 years.

But Mr Turnbull questioned whether it was credible to have a “hands-off” approach on a nuclear reactor “filled with weapons-grade uranium and not inspect it for 35 years”. He said if something went wrong with the reactors, Britain and the US had “extensive nuclear facilities and expertise to deal with it” while “Australia does not”.

Mr Turnbull, who will address the National Press Club on Wednesday, said if Mr Morrison had been “upfront” with French President Emmanuel Macron, he could have explored the option of going nuclear with the French and the US using low-enriched uranium reactor technology.

Considering all French submarines went in for a lengthy refit every decade, Mr Turnbull said “in this regard at least, French naval nuclear reactor safety standards are stricter than those applied in the United States and the UK”.

While the American nuclear-powered submarines would not be a breach of the international Treaty on the Non-Proliferation of Nuclear Weapons, Mr Turnbull said the move set a precedent that other countries, such as Iran, would “seek to exploit as a justification” for producing highly enriched uranium.

With more than 600 subcontractors signed up to the French build, Mr Turnbull also questioned whether the new program would create as many local jobs.

“And the submarines, we are told, will still be built in Adelaide. But if there are no nuclear facilities there, that must mean the submarine hulls will be transported to the US or the UK to have the reactor installed together with all of the safety and other systems to which it is connected,” he said.

“You don’t need to be especially cynical to see it won’t be long before someone argues it looks much simpler to have the first submarine built in the US or the UK, and then the second, third and so on.”