The National Dog Show has a new 2020 champ! Claire the Scottish Deerhound has taken over from 2019 top dog Thor the Bulldog to become Best In Show at the annual Thanksgiving classic.

With Thanksgiving celebrations and gatherings being limited due to the COVID-19 pandemic, folks at home could take comfort in hunkering down at home and watching the annual National Dog Show on NBC to brighten their holiday. It was a tough choice for the judges, but the end it was a Scottish Deerhound named Claire who was named Best in Show at the Kennel Club of Philadelphia competition. The large breed hound is known as the “Royal Dog of Scotland,” and was once used to hunt deer. 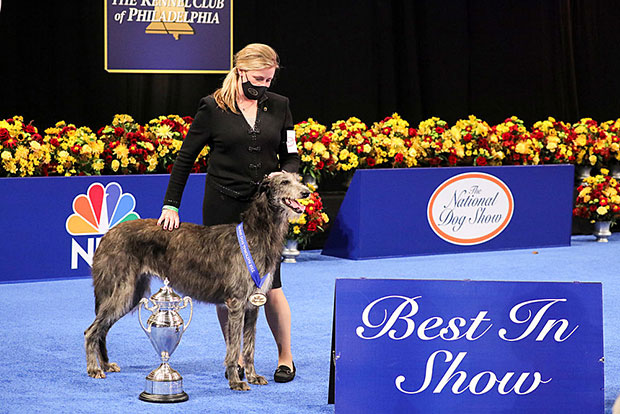 This is the first time a Scottish Deerhound as won the National Dog show, though Claire’s mom Chelsea won Reserve Best in Show in 2015. Claire comes from a prestigious breeding line, as in addition to her mom, Claire’s grandmother, Hickory, won the prestigious Westminster Kennel Club dog show in 2011.

The pup came up against some serious competition, as 600 entries were whittled down over the weekend of Nov. 14-15 at the Greater Philadelphia Expo Center. Ultimately, the top dog amongst the Toy Group, Hound Group, Herding Group, Working Group, Terrier Group, Sporting Group and Non-Sporting Group went on to the final round of competition for Best In Show. 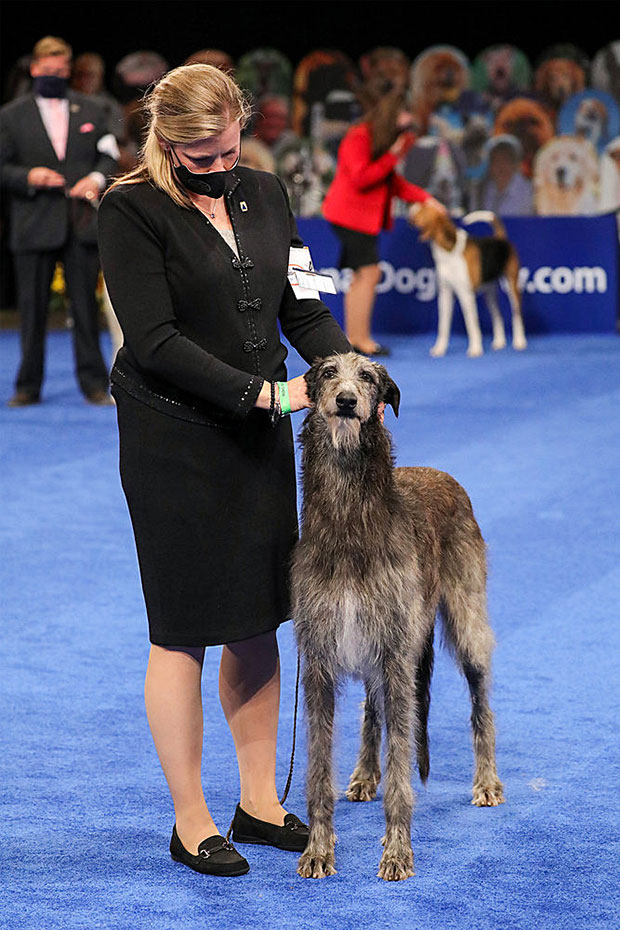 Claire takes over from 2019’s winner Thor the Bulldog. He had long history of show wins, so the National Dog Show title was the icing on the cake. But Thor had some stiff competition from the Sporting Group’s Golden Retriever, who proved to be the audience favorite with so much cheering and support whenever he made his showing in the ring.

That particular element was absent from the National Dog Show in 2020, due to the coronavirus pandemic. There were no spectators present as in years past. Only officials, NBC broadcast personnel and handlers/dogs were allowed on the premises of the Expo Center. However, there were cardboard cutouts of pups in the stands, which was pretty darn adorable!

The lack of an in-person audience wasn’t the only major change due to COVID-19 precautions. The number of dogs competing was dramatically decreased in a more limited showing. In past years over 2000 canine entries competed in their group’s categories, but this year it was limited to only 600 dogs, which according to the show’s press release marked a decrease of 70 percent of the usual entries. Four groups were judged on Sat. Nov. 14 and three groups showed the following day, where Best In Show was ultimately named.

For the 19th consecutive year, the two hour telecast aired on NBC at noon, following the network’s coverage of the Macy’s Thanksgiving Day Parade. Judging took place under health and safety protocols, with social distancing and mask-wearing involved.