‘C**Kfishing’ becomes the latest way to con people on dating apps, as women reveal guys have sent them photos of other men’s penises to make themselves seem more appealing

As if the world of online dating wasn’t confusing enough, a new phenomenon called ‘c**k fishing’ – whereby men are duping potential partners with other people’s pictures or altered snaps of their own private parts – has become apparent.

Urban Dictionary coined the term back in 2018, defining it as ‘the act of sending photos of a penis that is not yours to unsuspecting women or gay men who have no idea until its too late.’

One US-based social media user even revealed that he received a picture of his own penis from a potential match on the dating app Grindr. 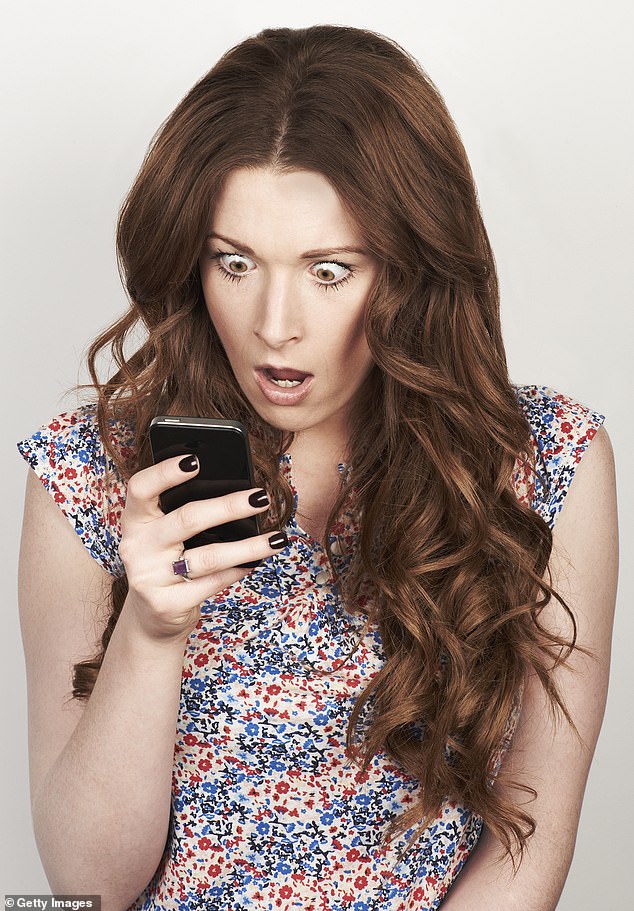 Duped: A phenomenon called ‘c**kfishing’ is on the rise, whereby men are sending someone else’s X-rated photos to prospective dates (stock image) 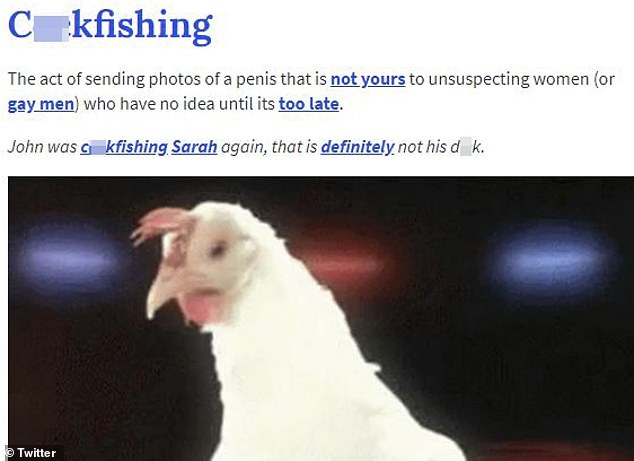 Infamous: The term has already wound its way into the infamous UrbanDictionary.com

Trending: It seems that countless people have been duped by misleading d**k pics

‘That happened to me years ago! Guy said it was his pic, but I still had the boxers that were in the picture,’ another man replied, proving that this practice is seemingly common on dating apps.

While the original owner of the photo, Brayden Wolf, said he was ‘proud’ his image had evidently been circulated so many times that it eventually made its way back to him, others on Twitter – notably females – sound less enthused about receiving dubious photos.

‘Don’t send me a d**k pic….then show up at my house with a different d**k,’ one user stated on the platform, while another said, ‘When you finally get his pants off but the d**k doesn’t match the d**k pics….’

‘Can I have someone arrested if they sent someone else’s d**k pics to me,’ demanded one woman.

‘If u are going to put a d**k in profile pic have the decency to put [yours] not someone else’s,’ said a female user.

‘How f**king sad do you have to be to send someone a unsolicited d**k pic of someone else’s d**k,’ slammed another woman.

Others have been bemoaning getting sent images that make a man’s private parts seem large when that’s far from the truth.

‘When people promise a cucumber but come with a gherkin..#c**kfished,’ said one recent tweet.

‘When he says he’s got that D and you find out it was lowercase,’ said another.

According to Metro dating and lifestyle columnist Jessica Lindsay, the trend for digitally altering is somewhat easy to spot when you know the tell tale signs.

She writes that all a man needs to trick a potential date is to position smaller objects beside his penis in order to make it look bigger.

‘The best way to spot a c**kfish is to check for any signs of obvious photo editing. That might mean blurring, distorted lines or odd angles,’ she advised.

While the term is going viral thanks to a certain tweet showing how the iPhone 11’s wide-angled lens can alter object’s size, it seems it has been making its way around the internet thanks to various memes for years.

According to internet culture database KnowYourMeme.com, the first instance of the term ‘c**fish’ was in a tweet back in 2013. The reference is a nod on the show Catfish, whereby people would trick potential dates with photos of someone else altogether.

Chatter: Twitter users weighed in on the enlarged banana pic with varying opinions

Some people on Twitter have called out that people shouldn’t be judging their dates based on such details.

Meanwhile, certain men have said it’s no different to how women enhance their faces and bodies with apps like FaceTune or Snapchat filters.

‘Just like most men when girls use filters… We bouta get that revenge,’ said one user.

‘This here is the equivalent as the filters women use, just as deceitful. Fair game! Lol,’ echoed a similar reply.

The newly-released iPhone 11’s wide-angled lens, and one viral tweet in particular, seem to make it easier than ever to pretend that you’re more endowed in the trouser department.

A Florida-based Tech YouTuber named Jeremy Judkins proved just how much the iPhone could alter reality when he shared a tongue-in-cheek image of a banana taken on his new phone’s pro camera. 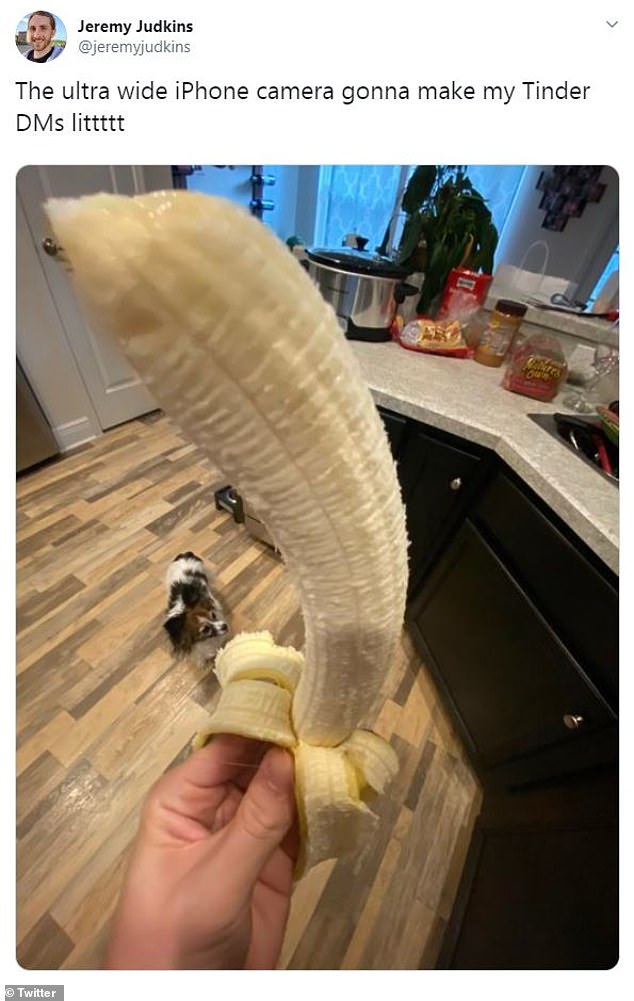 Trend starter: Tech YouTuber Jeremy Judkins created a viral meme when he showed the extent the new iPhone 11 pro camera could alter a banana to 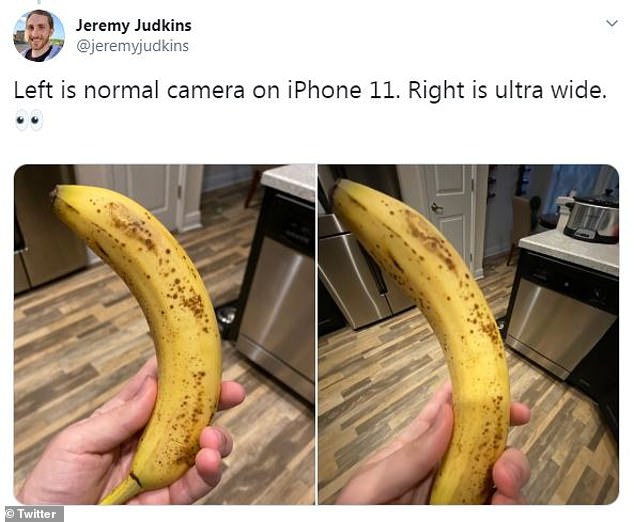 Ta dah: Jeremy showcased more iPhone 11 Pro lens trickery and the innuendo was clear for all to see

Proving his point, Jeremy also showed a comparison of two bananas, showing that the one taken with the iPhone 11 pro lens had significantly increased in size.

The picture was then used by a Seattle-based social media personality named Corlin, who amassed 285,000 likes on his tweet which was captioned, ‘iPhone 11 pro….boys, we got em’.

Female commentors fired back statements like, ‘I’ll sue’ and ‘We asking for videos now’.

Others cried, ‘The d**k pic revolution is upon us’ while some stated that men have been figuring out ways to visually enhance their penises ‘since the iPhone 7’.

Unlike straight forward ghosting, wherefore they never reply, this new term refers to a potential squeeze ‘liking’ your last message or comment, but never replying.

Phenomenon: Male and female Twitter users weighed in on the ‘c**kfishing’ phenomenon with hilarious responses