A Christmas-obsessed mother-of-three has already splashed out £700 on gifts for her family – and has even completed all of her shopping before Halloween.

Stacey Rosewarne, 38, from Taunton, Somerset, officially begins hunting for next year’s presents in the Boxing Day sales – and splashes out on around 100 presents each for her children Amber, 13, Jacob, seven, and Ebony, six.

The support worker said that she is ‘obsessed’ with Christmas and hides the piles of toys under the bed in the spare room.

One year, when she ran out of space, Stacey even hid a giant sloth teddy in the boot of her car and drove it around for weeks. 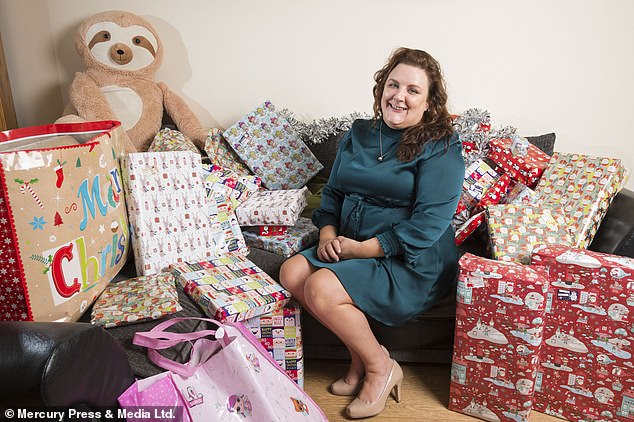 Christmas-obsessed Stacey Rosewarne, 38, has already finished her Christmas shopping after she started on Boxing Day 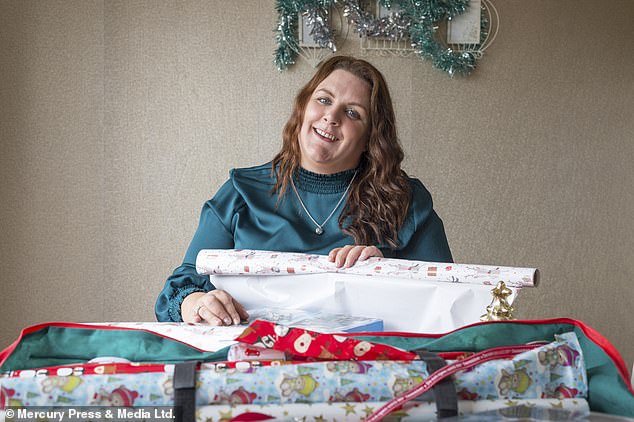 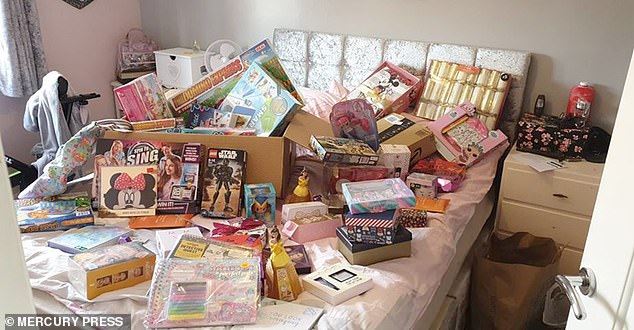 She buys 100 presents for each of her children Amber, 13, Jacob, seven, and Ebony, six

‘I’m obsessed with Christmas’, she said, ‘and I talk about it all the time, I love going round the shops to get my Christmas fix’.

‘As soon as my birthday in June is over I’m all about Christmas – if I could put my tree up now I would!’

‘My mum always used to make sure me and my family had a good Christmas, so I wanted to continue that tradition.’

Stacey has already stockpiled dozens of presents for her children, partner Darren, 40, and his two children and her sister, nieces and nephews.

Although the presents are stored in the spare room until they are wrapped, she admitted this can lead to mishaps. The support worker from Taunton, Somerset, said she has also stockpiled dozens of presents for her partner Darren, 40, his two children, and her sister, nieces and nephews 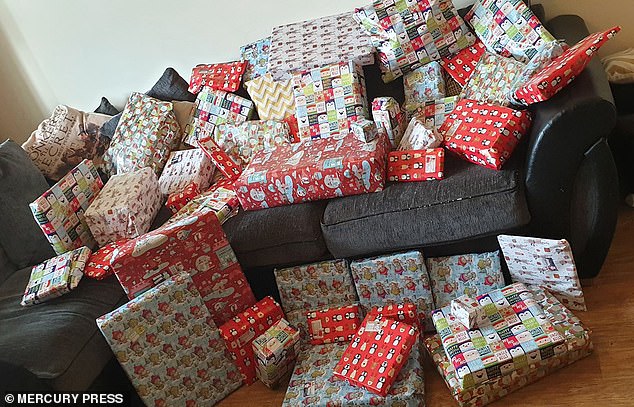 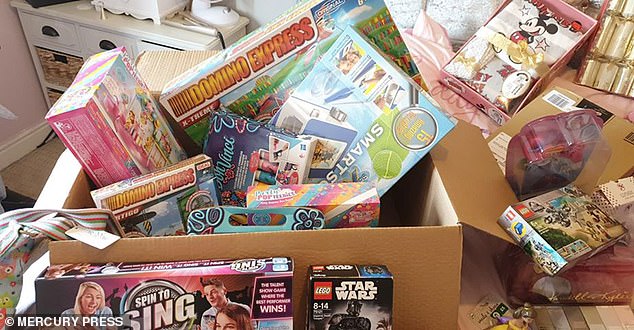 She stores the presents under the bed in her spare room in her three-bedroom house. When she runs out of space, presents are hidden elsewhere. One year she placed a giant sloth teddy in her car and drove it around for weeks

‘I live in a three bedroom house where there’s not many places to keep them,’ she said.

‘One time I drove around with a big sloth teddy in the boot for weeks because there was nowhere to hide it in the house.

‘Sometimes I’ve accidentally bought the same thing twice, and I don’t know about it until I get round to wrapping them all up.

‘Ebony recently went into the spare room and picked up a toy that was out and asked what it was. I’m definitely going to have to keep wrapping them up so this doesn’t happen again.’

Stacey believes starting to buy Christmas presents early is the perfect strategy, and using money-saving tips to plan how you spend your money is essential.

Using a Christmas saving scheme, Stacey puts cash away for presents each month in order to afford the gifts she buys for her family. 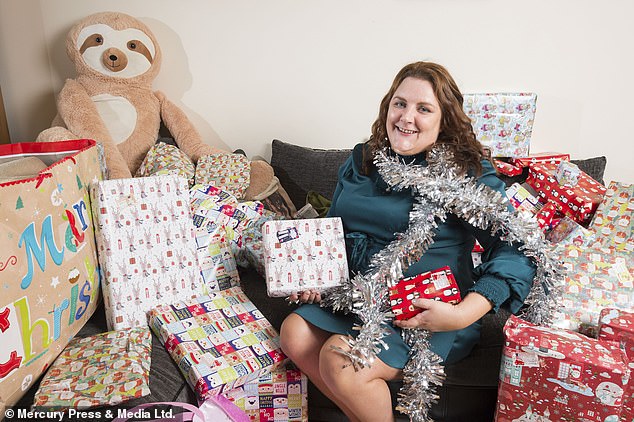 Stacey also admitted that sometimes she accidentally buys the same present twice, but doesn’t realise until she gets round to wrapping them all 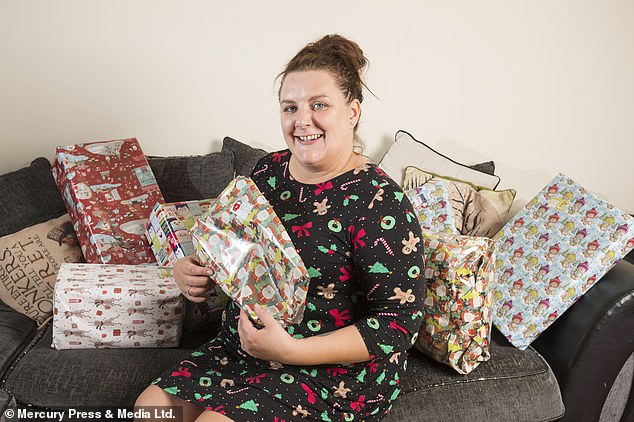 She added: ‘It’s a lot harder to shop for presents nowadays because children want more expensive things. I wouldn’t be able to do it if I didn’t budget.

‘I have savings allocated to buying Christmas presents and I use groups like Ashley Money Savers to find bargains online, or I go to the shops when I know there’s a sale on.

‘My biggest challenge this year has been trying to find my eldest daughter Amber presents because she wants more technology and branded things which are quite expensive. I can’t get her the latest Barbie anymore.

‘I know I spoil my children and some might not have the same idea as me, but I’m following my mum’s tradition and I always remember Christmas as a time to spend with family opening presents.

‘For me, it’s all about watching my children open their gifts and seeing their reaction.’ She also said that, after her birthday in June, she goes into Christmas overdrive 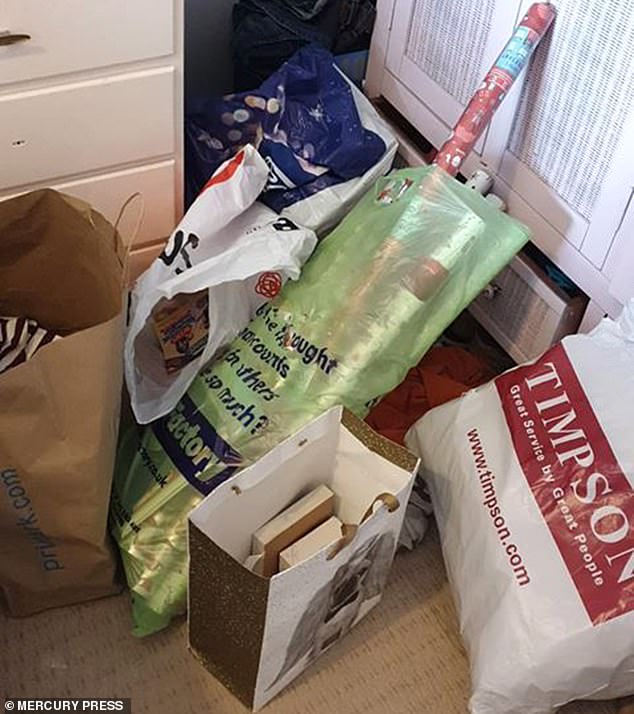 Stacey also said she uses groups like Ashley Money Savers to find bargains online, or heads to the shops when she knows that there is a sale on

Even though Stacey has the majority of her gifts sorted for this year, she admitted she will continue searching and said she will even buy something as late as Christmas Eve if it comes to it.

Stacey said: ‘I work really hard to buy these presents for my family and find present buying really exciting.

‘But, at the end of the day, Christmas isn’t all about the presents!’