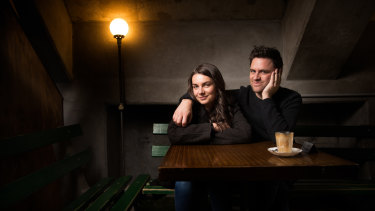 CHRISTIAN: I knew who Summer was before we met because her father, the screenwriter Everett DeRoche, wrote all these crazy horror films. My mum was also a teacher at this hippie school Summer’s mum helped start on Victoria’s Mornington Peninsula in the ’70s. We were worried because we’re very similar: what if our parents went to swingers’ parties and we’re actually related?

She’s ridiculously creative. With my latest book, The Wife and the Widow, she came up with the whole ending. Back in 2013, I won a screenwriting competition that led to Clickbait, this Netflix drama series I’m doing, and I was so close to not entering because I’m so lazy, but Sum convinced me. It was the same with the Victorian Premier’s Literary Awards, which my manuscript [for what became his 2018 debut novel The Nowhere Child] won. Before we met, I was terrified that I wasn’t smart enough. She pushed me in the best way.

Up until 18 months ago, I was trying to be a writer, but really I was nobody, slogging away at casual jobs – in a bottle shop, driving a food cart around a golf course. At one point Sum was working as a cleaner and I was at a call centre. [Success] has been life-changing. Sum is proud of me, but it’s been tough because it’s such a change in our dynamic. I assumed she’d be the one to get the break.

I don’t think there is a rivalry, but there is a balance and it got thrown around. I prioritised book stuff over her and it took me a long time to put myself in her shoes. I was being a bit of a dick. The day the book was published, I broke our plans to have breakfast because my publisher asked me to visit some bookstores. I really regret that.

Last year, we moved to Ocean Grove [a seaside town south of Melbourne]. We love our dog and having a little wood fire and just reading and writing and watching stuff. That’s all we want – just this little life.

Sum’s still directing, editing and teaching, but she’s also working on a podcast. Her grandfather and 22 other people went missing in a plane during the Cold War over the Bermuda Triangle, so the podcast is about uncovering that mystery.

Sum’s endlessly interesting, so there’s no small talk. She’ll be silent for 20 minutes and then come out with some bizarre, philosophical question like, “What if New Zealand suddenly banned all meat?” She’s a funny, mysterious person – someone you’d meet at a party and follow all night asking questions.

She found a dead rat in the backyard and just taxidermied it. I came home one day and she had gloves on, a jazz record playing, and an inside-out rat on the dining table. I was repulsed, but I loved it as well – this idea that you never really know the person you love.

I have lots of little compulsions and nervous tics and she just doesn’t care. She supports me 100 per cent and pulls me up when I’m being a jerk. I’ve never felt anyone knows me as much as she does – and she still agrees to stay with me. That’s such a gift.

He’s got the kind of personality you’re drawn to. That warm friendliness is who he is; it’s how he wakes up in the morning. He’s just a genuinely nice person. We’ve created this thing where it’s like, “I’ve got a relationship request. Can you not do this?” And he’s like, “Yep. Okay.” He’s an absolute treat to live with.

Christian’s the biggest animal lover. When we got our greyhound and found out she has separation anxiety five years ago, it wasn’t even a question of whether we should leave her at home and let her suffer. It was, well, let’s just bring her everywhere. He treats her like a newborn baby and even gets up in the middle of the night to put her jumper on.

The only other person I’ve seen as passionate about writing is my dad. The Nowhere Child will always hold a place in my heart because it was the first novel of Christian’s I read. It was gripping; I missed my tram stop multiple times. And it was such a relief that it was good – I didn’t have to lie.

The week his book came out, I think I saw him more on television than I did in person. It was like, what’s happening? Since then we’ve had to renavigate our relationship. The change in status was jarring because working in creative fields you get so used to hearing “no” – and then his no’s suddenly became yeses. And I had to share him with all these strangers. He wasn’t just mine anymore.

When you succeed that quickly, you inevitably become someone else. You go from people googling your name and nothing coming up, to being the top hit; you’re someone new. It was “Okay, this is who I’m married to” – not a guy who writes every morning and then goes to work in a bottle shop.

It’s a confusing mix of pride with envy and jealousy. Do I wish I had his life? Yeah, sometimes I definitely do. I felt a bit left behind, like, we’re both down in the trenches – you can’t get promoted. He’s incredibly humble – he wasn’t a dick at all – he just couldn’t understand my point of view. But we figured it out.

He’s taught me how to admit I’m wrong. That’s been the biggest change in me since our relationship and I guess that’s humility. He’s taught me that it feels better to not be right sometimes.

We get into bad habits where we watch reality TV shows every night – Love Island, the American version of The Bachelor. We go full trash. Companionship is the biggest thing I get out of our relationship; I feel like I have a partner in crime all the time. Which is why it was so jarring when the dynamics changed – I was so scared I would lose that.

To read more from Good Weekend magazine, visit our page at The Sydney Morning Herald, The Age and Brisbane Times.