A bride-to-be has been left ‘traumatised’ after all her hair fell out in just six weeks – but is now determined to be a role model to others struggling with alopecia.

Sophie Hitchen, 24, from Felixstowe, Suffolk, was shocked to find ‘handfuls’ of hair falling away from her head in April.

By the middle of May, she had lost about 90 per cent of her hair, and was left with wispy strands – which she decided to shave off in a bid to ‘take back control’.

Sophie is now also losing her body hair, including her eyebrows and said the experience has been ‘isolating and lonely’.

She added that her hair loss came ‘completely out of the blue’ – and that the trichologist and dermatologist she saw about it were ‘clueless’ as to what could have caused it.

She said: ‘Everyone who I have spoken to medically has asked if I have gone through any significant trauma or stress in my life.

‘But I haven’t – not to the extent that it would have caused this. There was no trigger for it.’ 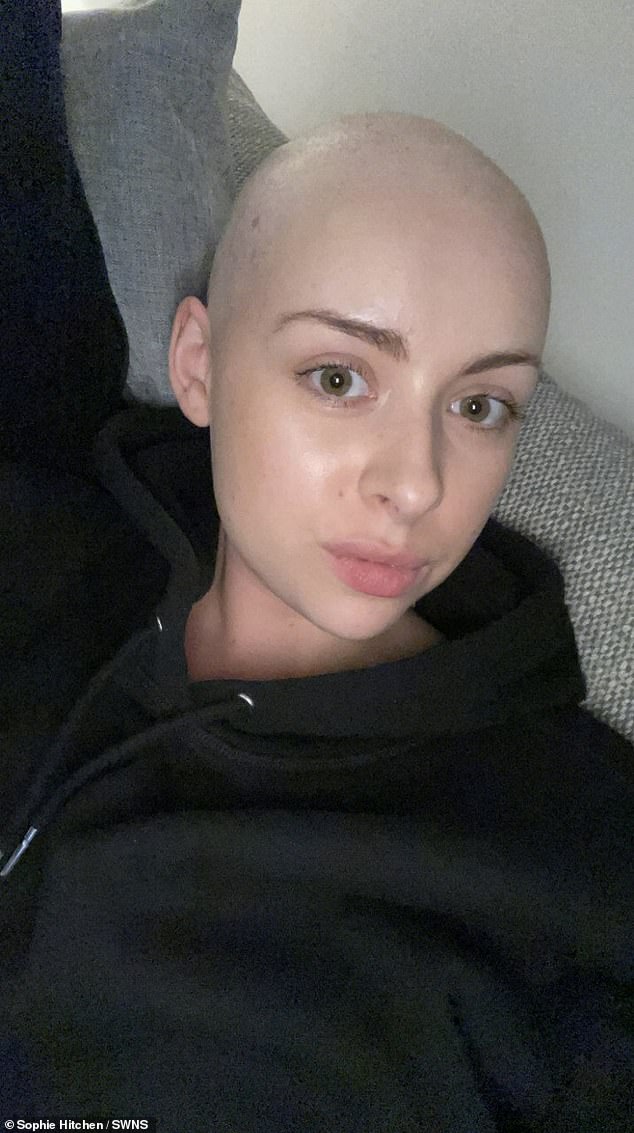 But Sophie, who is due to get married in October next year, said she now hopes to be a role model for other young people facing the same struggles she did.

Sophie said: ‘I found that a lot of girls on social media have helped me get through this over the last couple of months.

‘I wanted to be that girl for other people. I don’t want anyone to feel like they’re going through this alone.’

She added: ‘I’ve had so many lovely messages over the last few weeks from other girls or their parents who have said that my posts have really helped them. 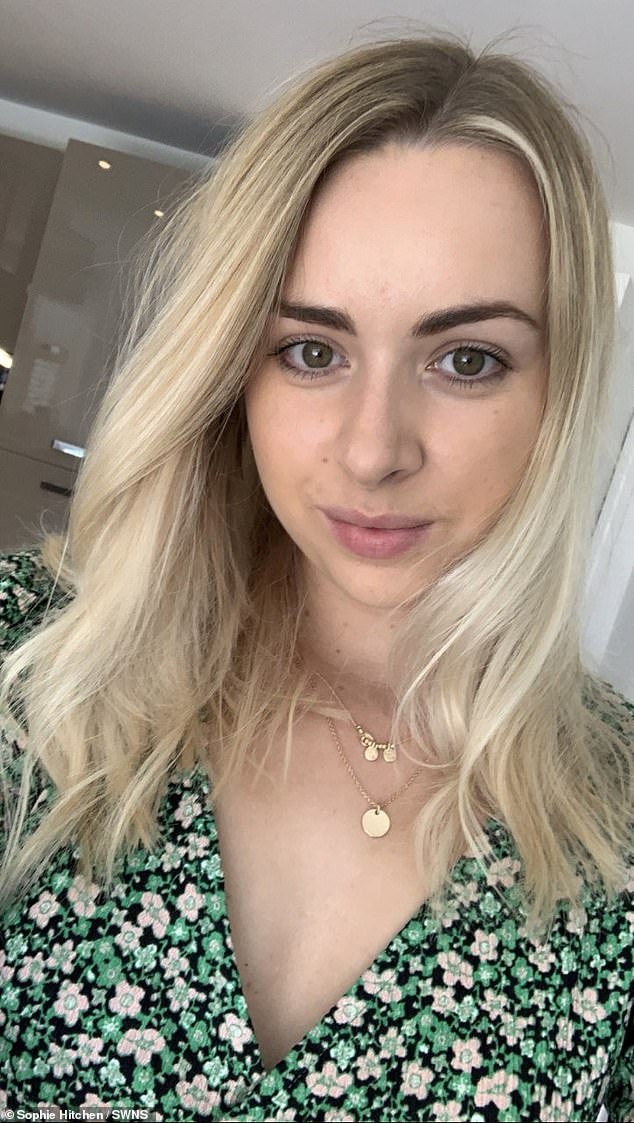 Sophie Hitchen, 24, from Felixstowe, Suffolk, had long, thick blone hair (pictured) before it suddenly started falling out in clumps

‘Nobody knows enough about alopecia or what really causes it. I just want to raise as much awareness as possible.’

Sophie, who works as a sales team leader, said she first started noticing ‘clumps’ of her hair started coming out in the shower or when she was brushing it.

She said: ‘At first I thought nothing of it, thinking it was probably just knots that were falling out.

‘But then over the next week or so, I noticed that my clothes were ending up getting absolutely covered in hair.

‘I left it another week or so, but when it continued to get progressively worse I had a phone appointment with the doctor, who suggested I have some blood tests done.’

Sophie’s blood tests came back clear – but shortly afterwards, she said her fiancé, James Keeble, 35, spotted her first bald patch at the back of her head. 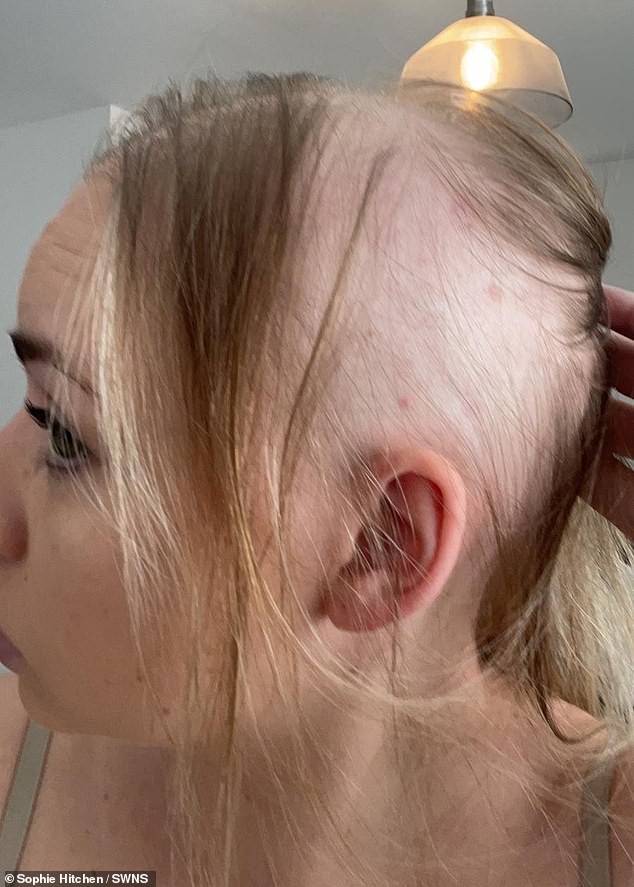 And by the middle of May, she had lost about 90 per cent of her hair, and was left with wispy strands – which she decided to shave off in a bid to ‘take back control’

She said: ‘Up until then I wasn’t really able to see where it was falling out from. So I asked him to look, and he found the bald patch.’

Sophie returned to the doctor, who sent her away with some lotion for excema.

But at the end of April, she went to see a trichologist, a specialist scalp doctor – who finally diagnosed her with alopecia areata.

She said: ‘After that, it happened really, really rapidly. That’s what was so hard about it at first.

‘For the first three weeks, I didn’t know how to cope. I didn’t get out of bed. I couldn’t sleep, because I was too afraid of waking up to find more hair on the pillow. 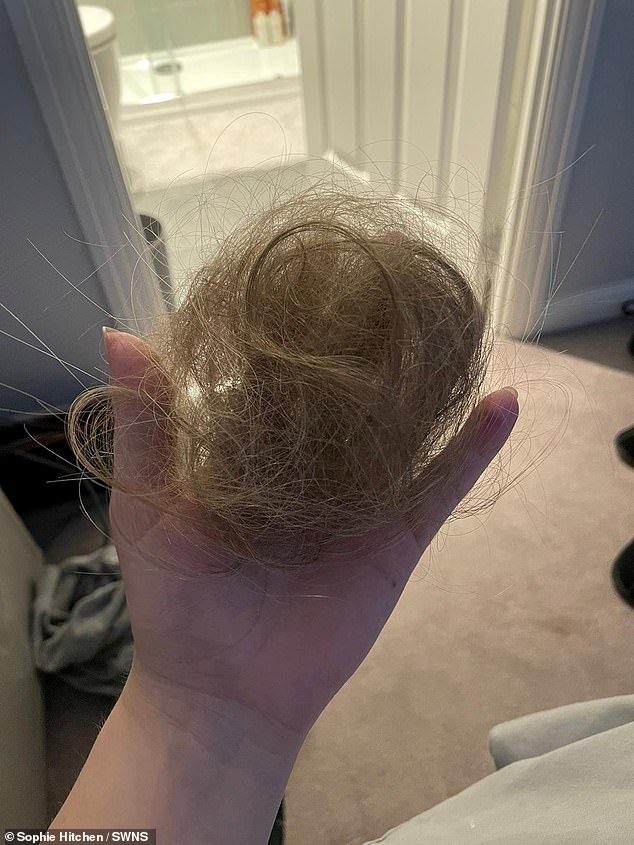 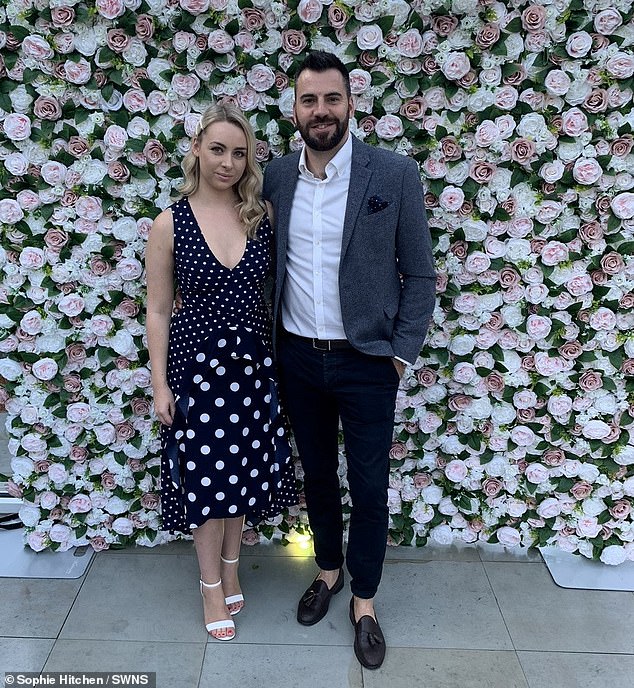 Sophie’s fiancé James Keeble, 35, who she is due to marry next October, spotted her first bald patch at the back of her head. The couple are pictured together before her hair started falling out

‘I had zero control over it. I didn’t wash or brush my hair for weeks, because seeing the hair coming out was traumatising. It took over my life.’

Sophie added that she began to cancel all her wedding dress fittings as she couldn’t face continuing with her wedding planning.

And she described going to look round her wedding venue as a ‘distressing’ day – as it was right in the midst of her hair falling out.

She said: ‘For as long as I can remember, I’ve wanted to get married at this venue. We booked it without even looking round it, because I wanted it that much.

‘But when the day came to go and see it, it was right in the middle of everything happening. 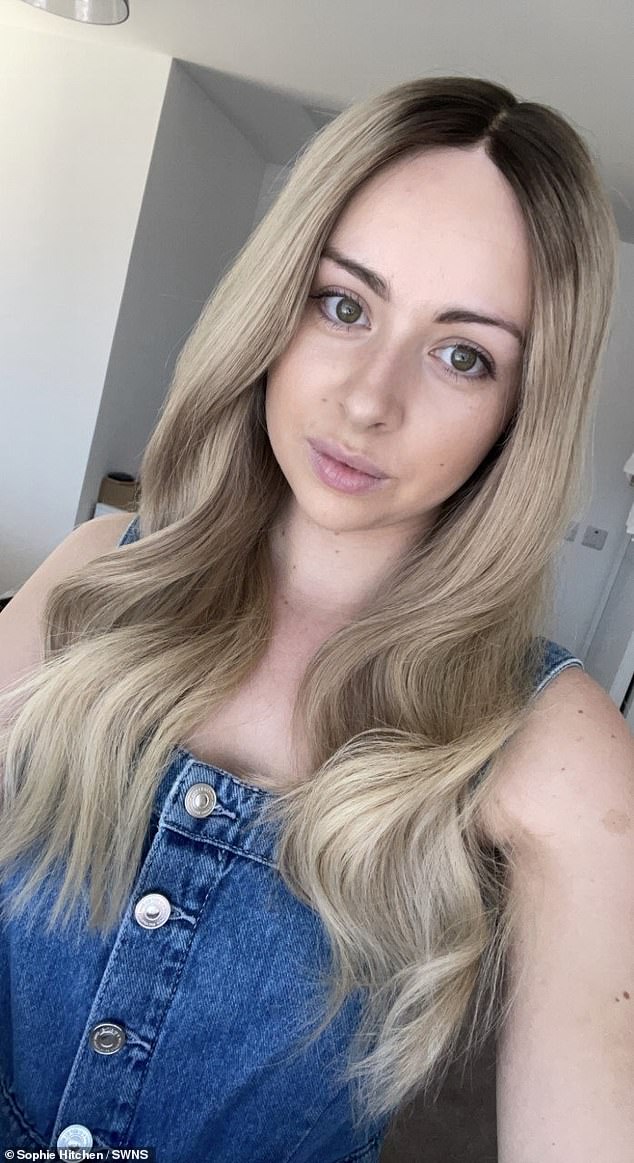 She has recently spent £2,500 having a special hair ‘unit’ (pictured) custom-made to fit her head – which is taped to her scalp so that she can sleep in it and even swim in it

‘I pinned my hair back as tight as I could that day, so that I wouldn’t have to think about it.

‘It should have been the happiest day of my life – but I can’t tell you how distressing it was.’

Eventually, on May 15, Sophie decided to take back control – and asked James to shave off what little hair she had left.

She said: ‘I can’t even describe what a relief it was. It felt like I was taking back control of what had been controlling me for the previous six weeks.

‘I’m naturally quite an anxious person, so I’m so proud of myself for somehow managing to take some form of positive out of this.’

Sophie is now on a six-week course of oral steroids to try and stop her immune system from attacking her hair. 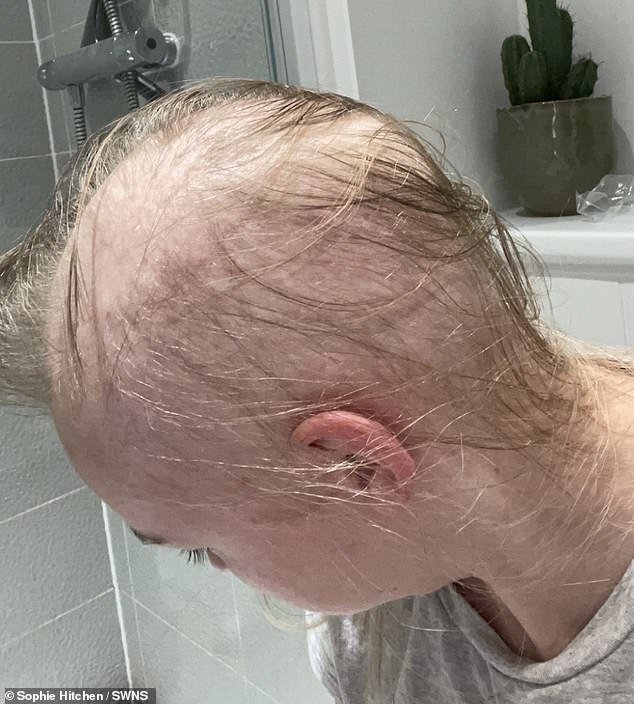 Eventually, on May 15, Sophie decided to take back control – and asked James to shave off what little hair she had left (her hair pictured on May 14)

She is due to return to her dermatologist later this month to discuss the option of continuing with a potentially more effective course of steroid injections directly into her scalp.

She said: ‘There’s no cure for alopecia – it’s more about calming my immune system down so I don’t lose any more hair from my body.’

And she has recently spent £2,500 having a special hair ‘unit’ custom-made to fit her head – which is taped to her scalp so that she can sleep in it and even swim in it. 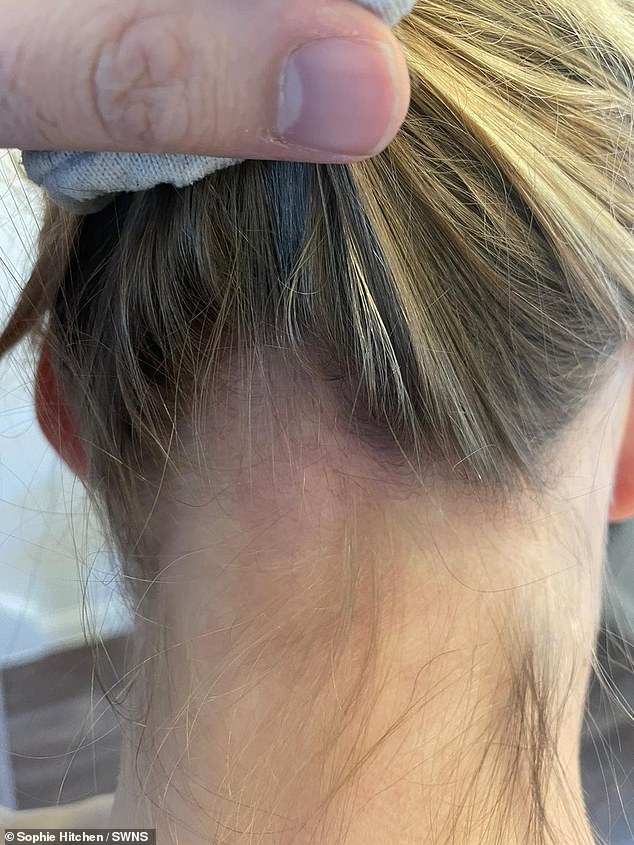 Sophie is now also losing her body hair, including her eyebrows and said the experience has been ‘isolating and lonely’ (her hair pictured on April 15)

She said: ‘It’s really comfortable. It was specially fitted for my head, so I can’t even really tell it’s there.

‘It’s just going to make life so much easier – I can sleep in it, so I’m able to just get up and go in the mornings without having to worry about putting a wig on.

But Sophie added: ‘I do feel fortunate that I’ve been in a position to pay for everything privately.

‘But I think that more needs to be done for those that aren’t as lucky. The NHS can contribute to two wigs a year, but they’re not very good wigs.

‘Getting help has been a real struggle, and I think there needs to be more done to change that.’

Alopecia, which causes baldness, is thought to be an autoimmune disorder. The immune system – the body’s defense system – turns on itself.

What are the symptoms?

‘Typically, one or more small bald patches, about the size of a 50p piece, appear on the scalp. The hair can start to regrow at one site, while another bald patch develops. Hair may also begin to thin all over the head,’ says Marilyn Sherlock, chairman of the Institute of Trichologists.

‘For some reason, the body’s immune system begins to attack its own hair follicles. Special white blood cells in the body, known as T-lymphocytes, cause the hair to stop growing,’ she adds.

Can worry make it worse?

Stress has been shown to prolong the problem.

Is it an inherited condition?

There is strong evidence to suggest that alopecia, like other auto-immune diseases, runs in families. About 25 per cent of patients have a family history of the disorder.

Alopecia areata usually affects teenagers and young adults, but it can affect people of any age. It is just as common among men as women.

Is there a cure?

There is no known cure, although there are various treatments which may be effective for some people.