Tony Blinken, the man Joe Biden has nominated as his next secretary of state, was in the room when Australia's current Coalition government first started grappling with the threat posed by China's ambitions.

It was five years ago in Boston, when then-foreign minister Julie Bishop and defence minister Marise Payne emerged from talks with their American counterparts, backing the Obama administration's decision to challenge China's territorial claims in the South China Sea. 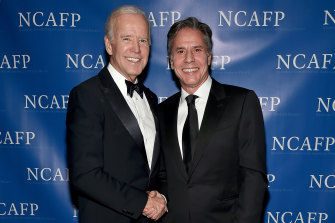 Joe Biden with the man he picked to be the next US secretary of state, Tony Blinken, in 2017. Credit:Getty

Blinken was then-secretary of state John Kerry's deputy, seen as the one with his eyes on Asia in a department that could never shake off its trans-Atlantic obsessions and its penchant for getting bogged down in Middle Eastern affairs – from interventions in Syria and Lebanon to the Iran nuclear deal.

Breaking away from its position to remain neutral on China's maritime claims in the disputed waterway, the US was now about to undertake freedom-of-navigation exercises to stand up to Beijing's growing militarisation.

While Obama's "pivot to Asia" had many pitfalls and false starts, it marked the first shift in US foreign policy which properly acknowledged that the Indo-Pacific was going to be the key strategy battleground of the 21st century. 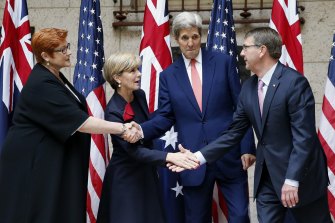 In this respect, Blinken – who served in the past two Democratic administrations, including as a deputy national security adviser from 2013 to 2015 and as deputy secretary of state from 2015 to 2017 – will be different.

Blinken is not an "Asia hand" per se; the fluent French speaker is a life-long diplomat who spent his high school years in Paris. But Australian officials who encountered him in the Obama administration say he was always attuned to the need to focus on a rising China and the instability that would cause in the Indo-Pacific.

He is a foreign policy realist with an interventionist streak who will be stronger than Hillary Clinton, John Kerry and the Trump administration in speaking up about China's human rights abuses.

This is why it would be a mistake to think of Biden's foreign policy as Obama's third term. Think more a hybrid of Trump's assertiveness towards Beijing – but without the trashing of alliances, multilateralism and free trade. In other words, something closer to Australia's foreign policy.

But Blinken will put a greater emphasis on cooperation with Beijing – which may place pressure on the Morrison government to restore political dialogue with China.

In September, Blinken told the Intelligence Matters podcast that China poses a "growing challenge, arguably the biggest challenge" out of any nation state. He said the relationship involved both "adversarial aspects" and "cooperative ones".

He said Donald Trump helped China advance its own key strategic goals by "weakening American alliances, leaving a vacuum in the world for China to fill, abandoning our values and giving China a green light to trample on human rights and democracy from Xinjiang to Hong Kong".

In words that seemed to echo Australia's Indo-Pacific strategy, Blinken said the key to dealing with China was building an alliance of other countries in the region.

None of this is to say Blinken will only be focused on our region.

His immediate task will be to set about rebuilding America's relationships in Europe. The standing of NATO, which was described by Trump as "obsolete", will have to be restored.

And Blinken will also hold allies to account for their action on climate change – beyond their Paris climate accord commitments.

Judging by Morrison's comments on the sidelines of the G20 over the weekend – in which he talked about the importance of world leaders focusing on the environment in the wake of the global pandemic – Australia is already shifting on this front.

Under Biden, Australia and the US won't always see eye-to-eye, but it's going to be easier than it was with both Obama and Trump.

And we will always be in the room.