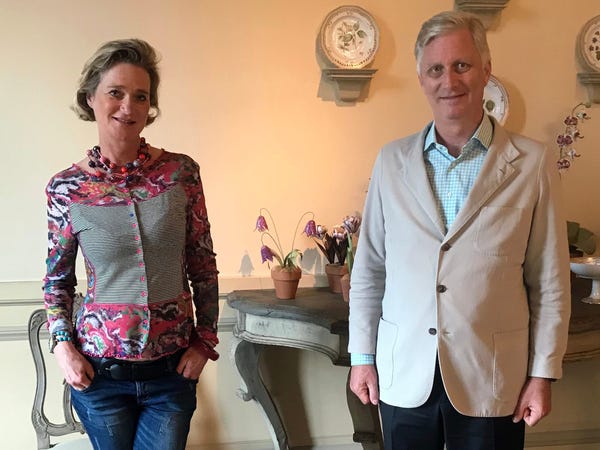 Delphine Boël is the 52-year-old estranged daughter of former King Albert II. He reportedly had her during an affair.

Delphine had publicly said the former monarch was her father since 2005. However, the royal family failed to acknowledge her existence until this year, when Albert II was court ordered to take a paternity test.

"On Friday 9 October, we met each other for the first time at the Castle of Laken," Delphine and King Philippe said in a joint statement, alongside a photo of the meeting, posted to Facebook on Thursday.

"It was a warm encounter. This long and rich discussion gave us the opportunity to learn to know each other. We talked about our respective lives and areas of shared interest. This bond will further develop within the family setting."

It is unclear whether Delphine got to meet any other members of the family, including Albert II.

The princess, who is a professional artist, previously said she didn't expect anything from the royals after seven years of court proceedings to prove she was related to them.

"I am just going to carry on with my work," Delphine said of her new title at a press conference last week.

"And however, if suddenly they show a sign of life, I would never [turn] my back to them," she said, speaking about the royal family.

King Philippe ascended the throne in 2013, after Albert II stepped down due to health reasons.