Beauty boss who made a packet out of papaya: She started Dr.PawPaw to cure her child’s eczema. Now it’s worth £5.5m and she’s our Entrepreneur of the Year

When Pauline Paterson found herself racing against the clock at 6pm to pick up her toddler from nursery for the zillionth time — dashing through crowds of London commuters, praying the suburban trains wouldn’t be delayed — she knew she was reaching the end of her tether.

‘I was dropping her off at 7.30am and then everything had to go like clockwork or it all fell apart.’ There had to be a less stressful way to make a living and be a mum.

So began her ‘side-hustle’ Dr.PawPaw, back then a venture with a single product: a funky-coloured tube of soothing skin balm made using papaya extract.

Eight years later, Pauline is the hugely inspiring boss of a £5.5 million business — and this year’s winner of Inspire’s Aphrodite Award, sponsored by the Daily Mail, part of the prestigious Everywoman Awards for the UK’s top female entrepreneurs. 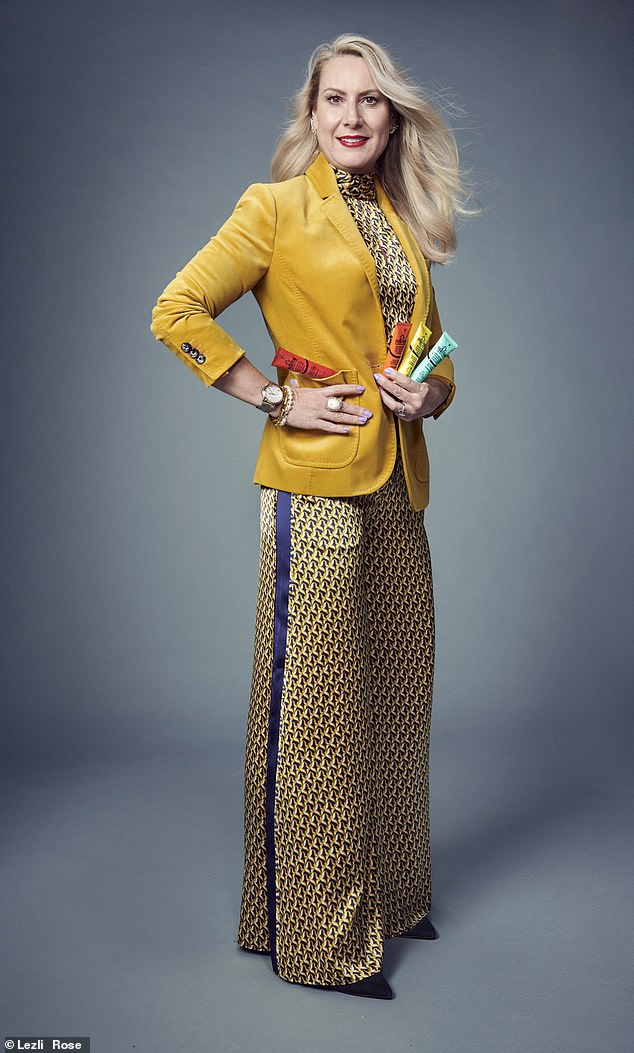 At a ceremony at the Grosvenor House Hotel in central London last week, she received her trophy to applause from an audience of leading businesswomen in ever-more diverse fields — from distillery owners to women’s health entrepreneurs, from body-positive activists to tech- industry innovators.

‘I was genuinely shocked to win,’ she says now. ‘The calibre of women on the Aphrodite shortlist and in that room as a whole was extraordinarily high.

‘There was such a lovely vibe there, too, all these women supporting each other at the end of what’s been another pretty tough year for everyone. I feel really proud to be part of it.’

In fact, it was the toddler waiting for her at nursery — Jasmine, aged two when Dr.PawPaw launched in 2013 — who inspired the brand. At the age of nine months, she’d developed chronic eczema on her arms and legs.

‘We tried every over-the-counter cream to heal it, but nothing worked. The GP suggested steroids, but we wanted to keep it as natural as possible.’

Pauline spent her childhood in Australia, where beauty balms quite routinely contain papaya, and as a last resort she tried one on Jasmine.

Instantly, the inflammation began to calm. Finding a source of papaya-based cream here proved impossible, however, and no one in Australia wanted her to import their product to the UK. So she started making it herself.

It was the move of a natural entrepreneur and yet Pauline is a hairdresser by training and has no formal education in business.

Now 43, she came to the UK at the age of 21 when she won an Australian hairdressing competition with a trip to London as the top prize. 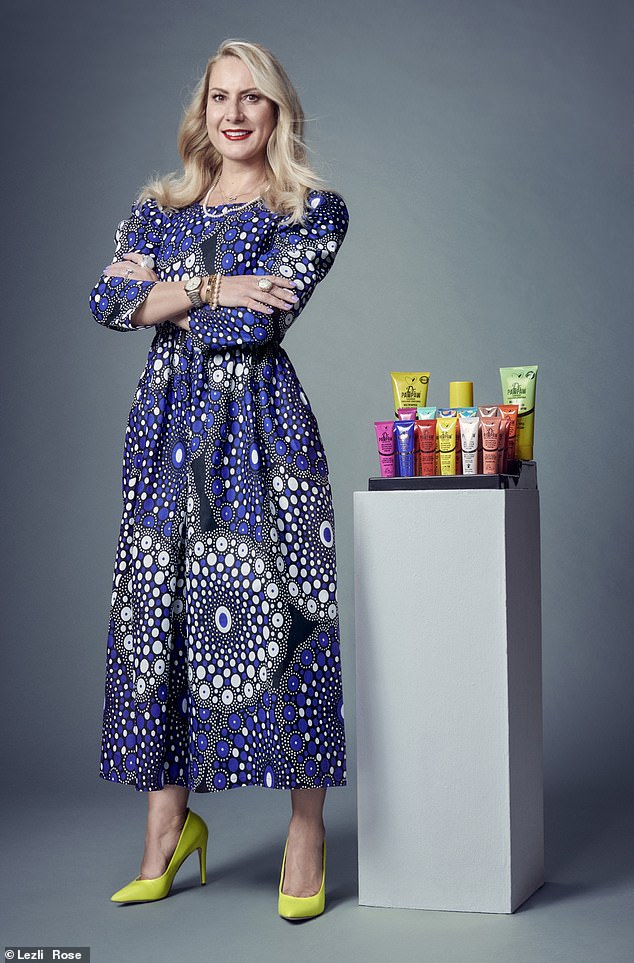 Pauline (pictured) said Dr.PawPaw was started with £20,000 — ten from her savings and ten from two friends

‘I asked them for an open ticket hoping to prolong the visit, and ended up staying for good,’ she laughs. A few years later, she met British husband Johnny, 40, who was then in marketing but now works for Dr.PawPaw.

‘The first key to entrepreneurialism is believing in yourself,’ she says. ‘Self-doubt is honestly the biggest obstacle women face.

‘But the second biggest challenge is money. We started with £20,000 — ten from our savings and ten from two friends — and I didn’t give up my job in haircare [at the Wella Academy in central London] at first because I couldn’t afford to. I had a family; I couldn’t lose the house!

‘Having said that, I do really believe you can teach yourself any and every skill you need. You definitely need resilience to keep going, but with that and plenty of research, anything is possible.’

‘I’d be breastfeeding him while on the laptop learning about intellectual property law,’ she says.

Filing the relevant documents herself saved the fledgling business £30,000 in fees. ‘I worked whenever he napped and whenever both kids were in bed at night. I still do.

‘Of course I was tired, but at least I wasn’t doing that crazy commute or having to ring Johnny in a panic and tell him to walk out of whatever meeting he was in because I was stuck. It was definitely less stressful.’

As a pure novice — and, depressingly, as a woman — she encountered her fair share of prejudice as she entered the world of business. Turned down for a bank loan, and even an overdraft, she was often dismissed as ‘the face’ of Dr.PawPaw rather than its owner. 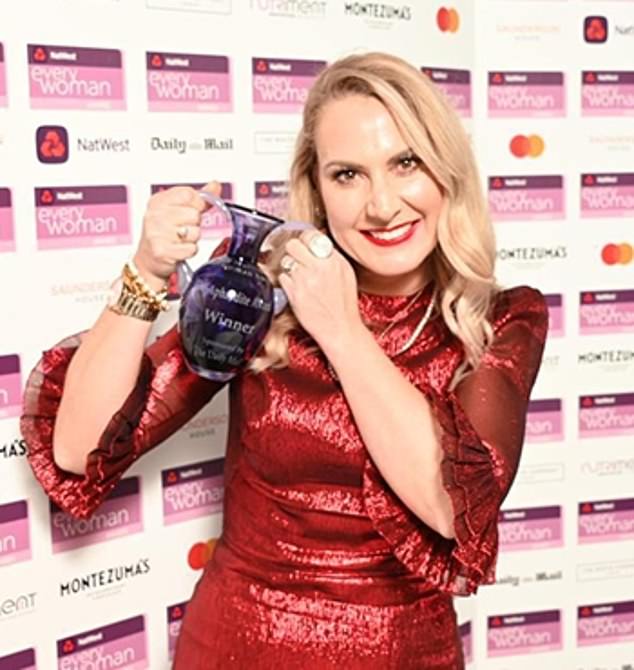 Pauline (pictured) admits that she hadn’t expected her brand to take off so quickly – today there are 36 products, from lip masks to hand creams to tinted balms

Yet her tenacity proved the doubters wrong, and when Harvey Nichols said yes to her (self-taught) pitch, she supplied them with 5,000 tubes of her original multi-purpose balm, and watched them fly off the shelves.

‘I really hadn’t expected it to take off so quickly,’ she says. ‘But after that we could really start to ramp up.’ Today there are 36 products, from lip masks to hand creams to tinted balms in their colourful little tubes, stocked in Boots, Superdrug, Sainsbury’s and Waitrose, the majority priced at less than £4.

With a celebrity following including Victoria Beckham, Emma Watson and Elle Macpherson, Pauline’s products are also now found on the shelves of huge U.S. cosmetics chain Ulta Beauty, which has 1,200 outlets across the States. Overall she’s stocked in 30 countries.

Next year the brand promises ‘a big launch’ of new products and a further push into the U.S. market. This year, however, has been hard, with Covid still causing havoc.

‘We haven’t made the targets we had for 2021 because we’re still operating in a world that’s very far from normal,’ admits Pauline.

Shipping costs have spiralled, she says, especially to China and the U.S. ‘I’ve spent long hours learning about global logistics this year, which I’d really rather not have done.

‘If anything good has come out of Covid, it’s the emergence of a new kind of self-care. I think women have really started to understand the value of taking time out for themselves, even if it’s just a long bath or putting a nice face mask on or reading a book.’

The pre-Covid merry-go-round was very hard for working mums to get off, she says — and when women did, they often felt guilty. 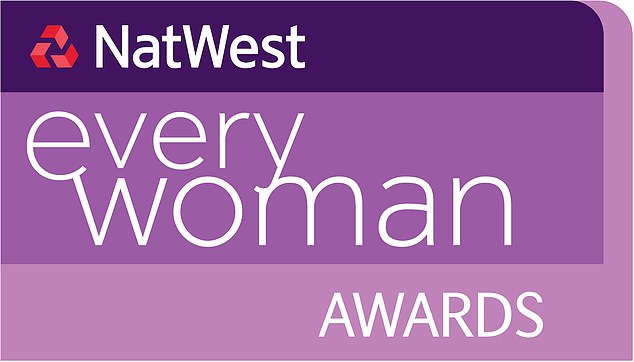 ‘Now I think we talk more about the importance of mental health and prioritising a balanced life. When you feel good, you project that feeling.

‘You make better decisions, have more confidence and, in the end, your work is more effective.’ By contrast, when you’re low, ‘you’re much more likely to fall for bad advice and to not think clearly’.

She adds: ‘A nice body lotion or a new lipstick can have all these knock-on effects. The idea of wellness or self-care can seem trivial, but it really isn’t.’

Her favourite moment at the Everywoman Awards last week wasn’t on stage as she was handed her prize, but afterwards when other women approached her to tell her how much they loved her products.

‘Best of all was one who said her son had eczema and ours was the only balm that soothed it. That really made me smile.’