This wrap of the latest reviews for shows in and around Melbourne kicks off with a radical reimagining of Milton’s Paradise Lost, and includes Opera Australia’s touring production of The Barber of Seville, Gorillaz, the Melbourne Symphony Orchestra, and new jazz.

Bloomshed’s bastardised and bonkers reimagining of John Milton’s epic poem Paradise Lost is a literary, political and religious satire with a fair dose of blasphemy. 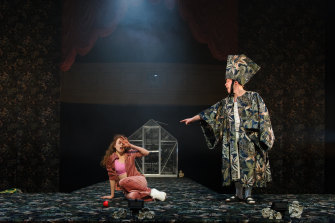 There is much to recommend in this production, not least of which are the remarkable set design (Nathan Burmeister) and the inspired and hilarious opening that features lighting trickery (John Collopy) and a cast of tiny cherubs. Milton is satirised mercilessly – described dismissively as “a blind 17th century Protestant poet” – and his celebrated work is stripped down to its narrative essence in this contemporary interpretation of Adam and Eve in the Garden of Eden.

The Lord God John Milton (James Malcher), a pompous poseur in ridiculously oversized headgear, narrates from his balcony while The Scribe (Anna Louey), seated in the audience, takes notes. Meanwhile, Archangel Michael (Emily O’Connor), a smug corporate executive type responsible for the idyllic garden, announces the launch of a perfect “lovemaking, toiling and worshipping machine” that will relieve the angels of all duties. Welcome Adam (Edan Goodall)!

Archangel Lucifer (James Jackson) objects to Adam being used as a machine, so Michael chases Lucifer away with only an armful of cherubs for company. Michael creates Eve (Elizabeth Brennan) from Adam’s rib then trains them like Pavlov’s dogs to do their daily chores of “sexing”, toiling and worshipping. It all goes wrong of course, and Lucifer returns, manipulates Eve into eating the apple and the garden is revealed to be a plastic, corporate sham.

Jackson has impeccable timing and witty delivery as the seductive, charming Lucifer who is passionate about saving Adam from servitude. O’Connor is commanding as Michael, playing him as a smarmy, charismatic evangelist running a campaign to lure investors into the garden development. Goodall’s Adam and Brennan’s Eve are sweetly silly and naive, although their dialogue is almost incomprehensible during all their running, toiling and sexing.

This reconstruction of Paradise Lost is a barbed commentary on political corruption, capitalism, environmental damage and social responsibility. It includes sharp, satirical dialogue and clever visual comedy such as Lucifer’s interminable elevator ride to Hell, accompanied by a musak version of Johnny Cash’s Ring of Fire. The earlier parts of the show feature cunningly written, well-performed monologues, particularly by Jackson and O’Connor, but the final scenes feel confused and have an edge of hysteria.

The audience laughs at the last parodic scene and the anachronistic introduction of Jesus, but the final image is poignant, even tragic rather than comical. It would be interesting to know which – if any – other sacred cows this company would be willing to sacrifice. Reviewed by Kate Herbert

OPERA
The Barber of Seville
On tour until September, visit opera.org.au for dates 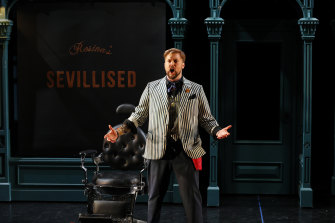 If Wes Anderson were ever to direct an opera, it would probably look a lot like this one. Opera Australia’s touring production of Gioachino Rossini’s The Barber of Seville is colourful, kitsch, and playful, with a pink-heavy palette and a whole lot of symmetry. This version can’t be pinned down to an exact era – in the best of ways, aesthetically it’s as if the ’40s met the ’60s with a hint of the early 2000s.

There’s a reason this opera, which premiered in 1816, is so enduring – it’s punchy, funny, contains memorable tunes and there’s room around the edges for innovation. This staging relishes in the humour of the source material while having its own distinct personality.

The Barber of Seville tells the story of Count Almaviva (initially played by John Longmuir, but then taken on by Nicholas Jones during act one due to sickness), who falls for a woman named Rosina (Cathy-Di Zhang) who is under the jealous guardianship of Dr Bartolo (Michael Lampard). Instead of being a father figure, however, Bartolo intends to marry her. Almaviva enlists the charismatic Figaro (Andrew Williams) – the titular barber of Seville – to help him both win and test Rosina’s love. Disguises and hijinks ensue.

Rosina could be a tragic figure – trapped, oppressed, and at the mercy of two different men who want to marry her – but she’s not. Rossini’s Rosina is already puckish and in control of her own story – at least to a degree – tricking her guardian and ultimately getting her own way. In director Priscilla Jackman’s version, Rosina’s autonomy is amped up – instead of being set in Dr Bartolo’s house, the entire opera takes place in and around “Rosina’s Sevillised Libations” and she enjoys tripping, teasing and manipulating Bartolo. Zhang excels at the physical comedy required of the role and in the vocal challenges.

Though occasionally some of the men’s voices didn’t quite manage to fill Bendigo’s Ulumbarra Theatre, each of the leads demonstrate an impressive command of vocals and acting. Williams’ delivery of the iconic Figaro, Figaro, Figaro! – a line that has osmosed out of opera and into pop culture – was a particular early highlight.

This staging is a crowd-pleasing story dressed up in a thoughtful and fun new way. Reviewer Elizabeth Flux travelled to Bendigo as a guest of Opera Australia.

The first word that comes to mind is “joyous”.

After a 12-year absence and an unfortunate Splendour false start, Gorillaz played their first Australian date to a packed Melbourne crowd smiling from ear to ear. How couldn’t you be, as Damon Albarn bounded on stage, toothy trademark grin intact, to belt out M1 A1 like it was 2001 all over again and we had slightly fewer worries than we do now? 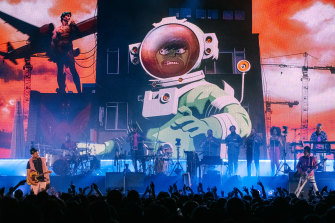 Gorillaz themselves technically hadn’t even taken the stage yet, however Jamie Hewlett’s animated creations of Hobbs, Murdoc, 2-D and Noodle quickly filled the visuals for the evening, especially Song Machine highlight Strange Timez where they did a duet with Robert Smith on the moon. That’s just cool.

High praise must be placed on the impressively diverse stage presence of the band, who looked like they were having just the best time, all the time. They cranked out hit after hit with a great sound mix highlighting just how many members were on stage contributing so much. 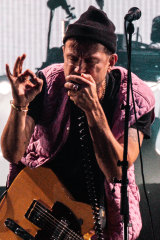 Almost everyone made use of the stage’s small catwalk at one point to soak in the newly believable aspect of playing to an audience, while coincidently making me wish I could buy Albarn a beer as he barged into the crowd during Pirate Jet.

It’s safe to say we weren’t ready for the 1-2 punch of Dirty Harry into Feel Good Inc. With so many life-defining songs on display, Albarn proclaimed the set was “what you needed and what we needed”.

A massive encore left us with sore cheeks from smiling for two hours, and a hope that it won’t be another 12 years between drinks. Reviewed by Harry Bradley

“I alone hold the key to this savage parade.” These startling words by poet Arthur Rimbaud launch Benjamin Britten’s song cycle Les Illuminations, a work which imparted its exotic and precocious mood to this concert performed by the strings of the Melbourne Symphony Orchestra.

One of the keys to the program was the French influence on Britten’s music, initially celebrated with excerpts from Purcell’s fashionably Gallic score for The Fairy Queen. Concertmaster Dale Barltrop elicited stylish, lively and luminous playing, apart from the disproportionate presence of three double basses.

This possible signal of impending savagery was explained after the Purcell, when regular MSO bass player Stephen Newton declaimed the opening line of the Britten from his place at the rear of the orchestra. Leaving his instrument behind, he then moved to various points around the stage to assume his role as soloist. 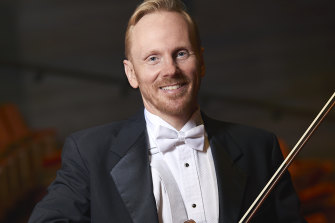 Newton presents as a loveable larrikin, of whom Rimbaud would doubtless have approved, but the more strait-laced and exacting Britten might have been pained by Newton’s wanderings. Although committed to a highly dramatic rendering of text and music, Newton could not afford the luxury of being anywhere other than front and centre, where his light and not unattractive tenor had some chance of being heard over the orchestra. Ultimately, the net result was more elusive than savage.

The undisputed enthusiasm that Barltrop and his colleagues brought to the Britten was also present in Ravel’s String Quartet in F, carefully arranged for string orchestra to preserve the delicate light and shade vital to Ravel’s original concept. Beautifully honed solo passages, notably by Barltrop and violist Fiona Sargeant, were offset by brilliant, energetic tuttis.

Showcasing the multifaceted talents of musicians is to be applauded, but greater musical practicality held the key to unleashing the power of this “savage parade”. Reviewed by Tony Way

Gai Bryant named her latest band Ally because she sees its members as musical allies, uniting their creative resources in pursuit of a common purpose – in this case, exploring traditional Latin rhythms through a contemporary jazz lens.

She could also have called the band Alloy, which would neatly describe the fascinating amalgam of styles and cultures on which the music is based. Peruvian, Brazilian, Cuban and Andalusian rhythmic traditions lie at the heart of Bryant’s compositions, lending the tunes an undercurrent of irresistible buoyancy.

On Friday night at a sold-out Paris Cat, the Sydney sextet filled the room with vibrant Afro-Peruvian festejo, Brazilian maracatu and flamenco bulerias. Percussionist Julio Candela (on cajon and congas) and drummer Ryan Menezes formed the agile twin engine for these polyrhythmic adventures, anchored by Max Alduca’s supple bass and Daniel Pliner’s deft piano. Bryant – on alto and soprano sax – and trombonist James Greening typically laid out the melodic themes in taut unison before harmonising or peeling off into authoritative solos.

On Cuba the horns rode in a loping canter over the rhythm section’s intricate, multi-layered pulse. Spheres That Don’t (a flamenco reworking of Thelonious Monk’s Well, You Needn’t) featured fluttering cajon to underline the staccato melody, with Bryant’s soprano adding flecks of angularity before Greening embarked on a wonderfully exuberant solo excursion. 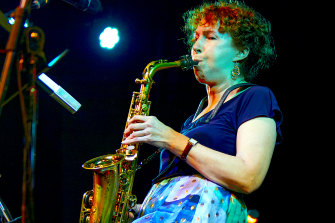 On several tunes the band was joined by Brazilian-born poet Dai Moret, whose liquid phrases in English and Portuguese – half spoken, half whispered – added an air of seductive mystery.

Most pieces in the generous two-hour show were drawn from the band’s debut album Drum Junk. The final tune (Bright Mississippi) was a new composition pinned to an effervescent Cuban montuno, which not only served as an uplifting finale, but hinted that Bryant and her empathetic allies still have plenty of musical discoveries ahead. Reviewed by Jessica Nicholas