As the clock ticked past 5.30am on Saturday, about 2500 bare bums soaked up the sea salt and sand at Sydney’s most famous beach.

The stripped-off Sydneysiders had braved the wind and at times the rain from 3.30am to participate in a large-scale artwork at Bondi Beach for world-renowned artist Spencer Tunick. 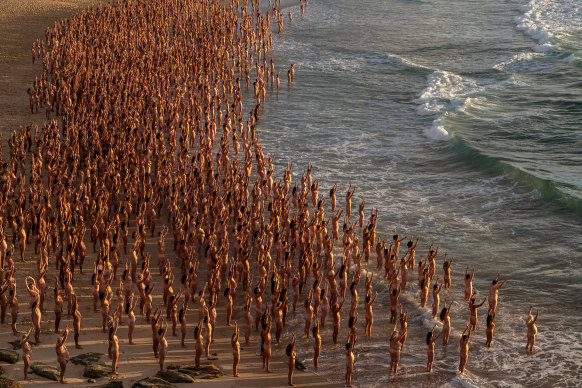 About 2500 people participated in Spencer Tunick’s installation at Bondi Beach on Saturday.Credit:Flavio Brancaleone

Famous for photographing the naked masses, Tunick has held shoots at some of the world’s most iconic locations, but this time he was collaborating with Skin Check Champions, a small Australian charity that raises awareness of skin cancer.

“When you’re doing work for charity, and something involved with health, you realise your own longevity,” Tunick told The Herald.

It’s the biggest crowd that Tunick has lured since 2016 and the second installation he has done in Sydney, having previously captured 5000 people on the steps of the Sydney Opera House in 2010.

From the top of a cherry picker, the New-Yorker used a megaphone to move people around like chess pieces to capture the only time in history that Bondi had been given a permit to be a nude beach. And come 5.15am, the only people left with their clothes on were police, paramedics and council workers.

International keynote speaker Lucy Bloom, who was singled out by Tunick at one stage (most likely because of her bright pink hair), told the Herald she was inspired to join in because she had studied art and followed Tunick’s work before.

“There was a moment there where we were all looking toward the sun, and the sun broke through the clouds, and it was warm on our skin, and there was about 20 seconds of wow. Everyone was quiet. It was amazing,” said Bloom.

Christopher and Angela Burns said they had participated in the installation at the Opera House, and when they heard Tunick was coming back to Sydney, getting naked again was a no-brainer.

“My wife and I had a great time down there, and this is for a really good cause,” said Burns.

“It’s skin cancer awareness week, and we are raising awareness for people to get skin checks.

“Anyone who has body image issues should go to something like that because it’s people of all shapes and sizes, and it just feels normal.”

In a time when social media platforms are censoring nudity more and more, Tunick, who is also the co-founder of Don’t Delete Art, said that there has never been a more important time to showcase the beauty of the human body.

“Some of the archaic laws against the body are sort of lifted for a short period of time. It’s pretty wonderful,” he said.

With feet crumbed like fish fingers, people started to crawl off the sand just as Bondi’s regular crowd was emerging from slumber, with dog walkers, runners and early surfers curiously watching on as people shook off the sand and pulled on their clothes.

And besides one disgruntled fisherman who was moved along, so he didn’t ruin the frame, it was a beautiful and unforgettable morning in Bondi.