The tragic events of the 2002 Bali bombing, in which 202 people lost their lives, will form the basis of a four-part drama series on Nine and its streaming partner Stan.

It is the first time the terrestrial and streaming arms of Nine, which also owns this masthead, have co-commissioned a drama series, though Nine’s director of television, Michael Healy, promises there will be “more announcements on [other drama] collaborations in coming months”. 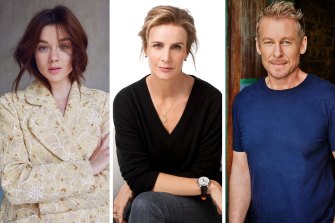 Claudia Jessie, Rachel Griffiths and Richard Roxburgh are teaming up for a Stan/Nine series about the Bali bombing. Credit:Stan

Production on Bali 2002 began on Wednesday in western Sydney, where a set featuring replicas of Paddy’s Pub and the Sari Club, where the bombs were detonated, has been constructed.

The series is being co-produced by Screentime, the makers of the Underbelly franchise, and Endemol Shine Australia, better known for its massive slate of reality shows – MasterChef, Big Brother and Married at First Sight among them – but whose intent to re-enter the drama space was perhaps signalled with last year’s RFDS for Seven.

The series is billed as “an inspiring drama that explores how everyday heroes from Bali, Australia and beyond defied the odds to bring order from chaos and hope from despair”. It will star Rachel Griffiths, Richard Roxburgh, Sean Keenan and Ewen Leslie, with British actress Claudia Jessie (Bridgerton, Line of Duty) alongside a host of newer faces from Australia and Bali.

Executive producer Tim Pye said it was “an Indonesian and Australian story, an event that devastated both countries but also brought them together, so it was really important to us to have Indonesian voices and input from both countries’ point of view”.

It has been developed, Stan chief content officer Cailah Scobie says, by creatives in Australia and Indonesia, “and in consultation with those directly impacted”.

This will not be the first attempt to bring the story to the small screen, and not even the first with which Richard Roxburgh has been involved.

In 2017 the actor shared with this masthead his belief that an ABC series on the events surrounding the terrorist attack, which Blue Murder writer-producer Michael Jenkins had developed for the ABC in 2005, just might have been the best piece of Australian television never made.

“It was ballsy,” Roxburgh said, “it did a masterful job of balancing that thing where you could empathise but you didn’t sympathise – and nor should you because the outcome was an indescribable horror.”

The series was in the early stages of production in 2005 when real-life events took over. A second bomb attack in Bali killed 20 people. Concerned that the world would conclude Bali was a willing home to extremism, the Indonesian government shut the production down.

Bali 2002 is not that series, and everyone involved will be hoping it enjoys a far less troubled production.