‘Bachelor’ alum Carly Waddell ‘passed out’ on plane before hospitalization

Tituss Burgess: I’ll be ‘a hog in s–t’ hosting ‘Bachelor in Paradise’

“The Bachelorette” alum Josh Murray revealed he and his friends were hit by a drunk driver following their Fourth of July celebrations.

“Sorry if I’ve been MIA for a couple days to those asking, figured this was easier to write here – my friends and I were hit by a drunk driver on the lake a couple days ago after the fireworks,” Murray, 36, wrote in an Instagram Story on Tuesday.

While the reality star does not appear to have been badly injured — he said he was “fine physically for the most part” — he shared, “One of my buds got hurt bad but thankfully will recover after many surgeries. Others were shaken up obviously.”

Murray concluded, “Anyways, hope y’all had a great 4th and be safe out there. Just got my phone back, so sorry for no responses for a couple days. Say a couple prayers for my bud when u get a chance.”

It is unclear where the accident took place, but the former baseball player is based in Buckhead, GA.

Murray did not immediately return Page Six’s request for comment. 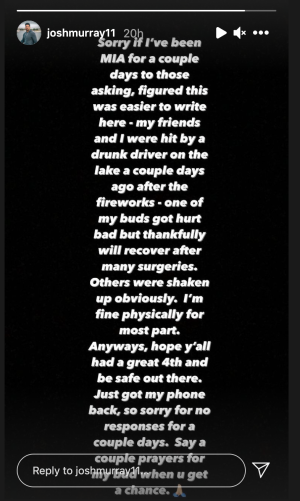 The entrepreneur made his TV debut in 2014 on Season 10 of “The Bachelorette,” where he finished in first place and got engaged to lead Andi Dorfman. However, the couple split shortly after in 2015.

Murray then met and proposed to fellow Bachelor Nation alum Amanda Stanton on Season 3 of “Bachelor in Paradise” in 2016. They broke up in 2017.