A bestselling author enlisted her husband to help her promote her latest book on TikTok, having him pretend to be the adulterous — and possibly murderous — main character in her new psychological thriller.

But some social media mistakenly believed that her husband is an actual murderer, and blasted the author for making light of a woman’s death.

Now author Jeneva Rose and her husband Andy have had to clear up that the novel is purely fiction, and Andy neither cheated nor murdered his mistress. 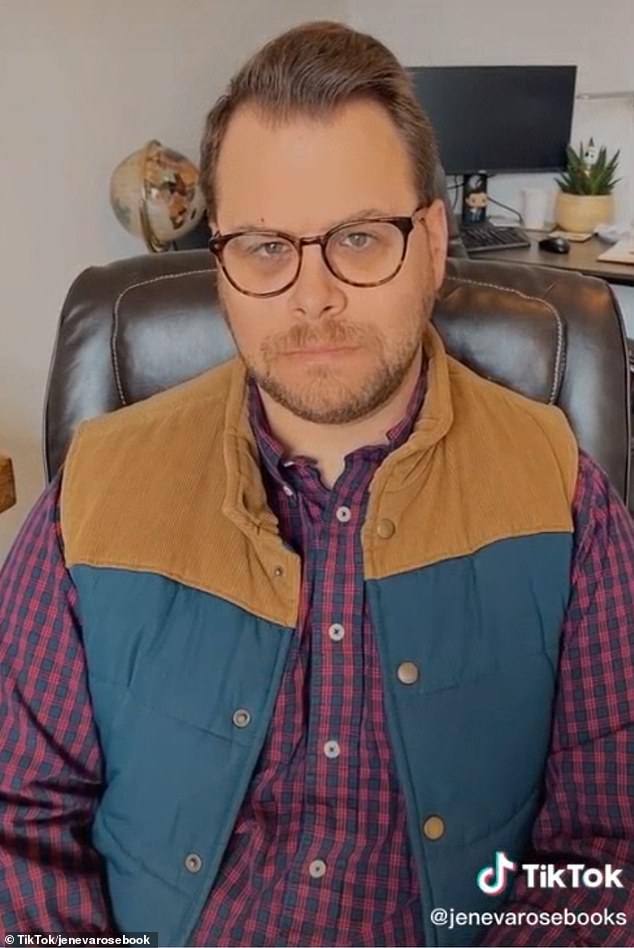 Clever: An author enlisted her husband to help promote her latest book on TikTok, having him pretend to be the adulterous, and possibly murderous, character in her new thriller 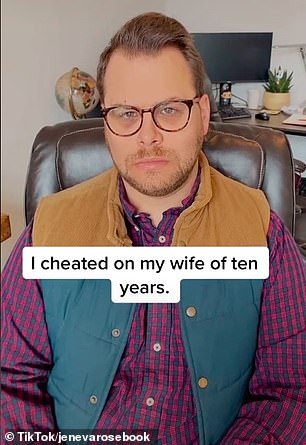 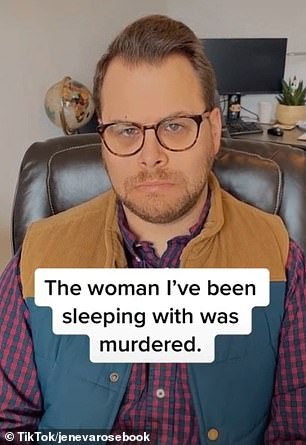 Uh-oh: In the viral video, her husband pretends to have cheated on his wife with a woman who has since turned up dead 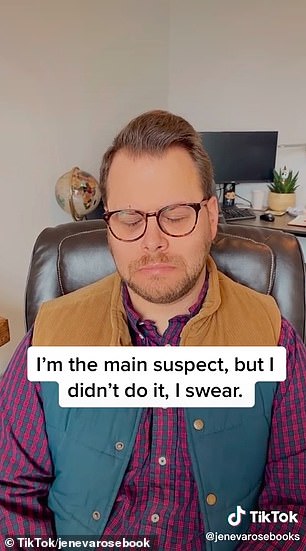 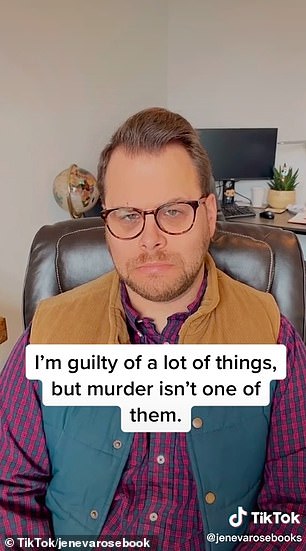 ‘I’m guilty of a lot of things, but murder isn’t one of them. I swear, I didn’t do this,’ he says 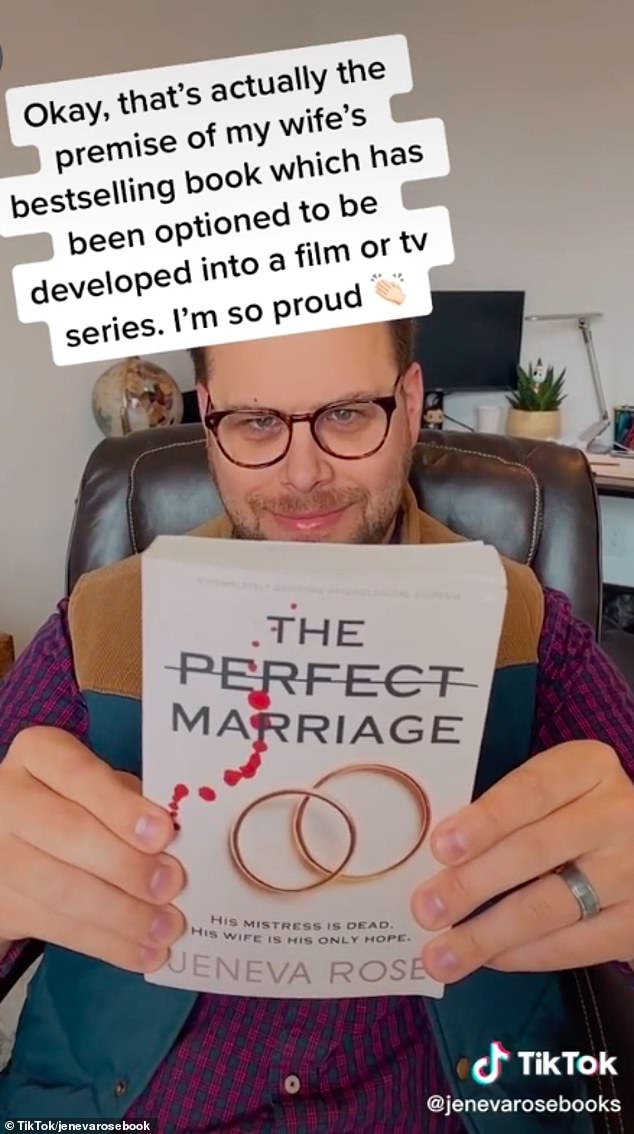 Just kidding! He then pulls out a novel by his wife, Jeneva Rose, revealing that this was just the plot to her book

He’s guilty of a lot of things, but murder isn’t one of them. ##GEICOLipSync ##nobodynocrime ##booktok ##messytiktok ##bookrecommendations ##storytime

Jeneva’s book, The Perfect Marriage, was released in July of 2020 and is an Amazon bestseller — possibly in part due to her creative promotion. 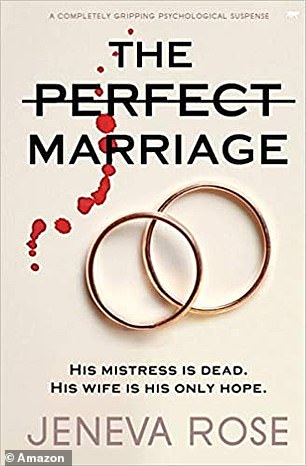 The book: Jeneva’s book, The Perfect Marriage, was released in July of 2020 and is an Amazon bestseller — possibly in part due to her creative promotion

On Sunday, she shared a TikTok video starring her husband Andy, who looks straight into the camera as a story flashes on the screen.

‘I cheated on my wife of ten years,’ the video reads. ‘Wet met in college. She went on to become a top criminal defense attorney. I became a writer… a struggling one at that.

‘The woman I’ve been sleeping with was murdered. I’m the main suspect, but I didn’t do it, I swear.

‘Now my life is in my wife’s hands and she’s defending me. I’m guilty of a lot of things, but murder isn’t one of them. I swear, I didn’t do this,’ it says, as Andy looks down with a guilty expression.

The tone then switches, and Andy looks up with a smile on his face — and The Perfect Marriage in his hands.

‘OK, that’s actually the premise of my wife’s bestselling book which has been optioned to be developed into a film or tv series. I’m so proud,’ the video reads. 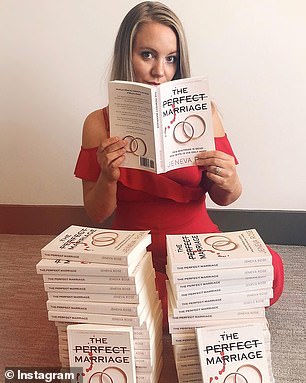 Money maker: Jeneva is seen showing off a pile of her bestselling book

The video has quickly taken off, earning nearly 50,000 views in less than a day.

Some commenters who have stumbled across the clip expressed that they fell for it at first, believing it was a real confession until the big reveal at the end.

But others still didn’t get it even after Andy held up the book, believing that it’s the telling of a true story.

Jeneva has followed up with several more videos, all poking fun at the idea of her husband being a murderer.

‘A TikTok of mine went viral, and as a result, people think my husband is a murderer and an adulterer. Well, I’m here to set the record straight.

‘He is not a murderer nor an adulterer. Thank you,’ she says in one.

She then looks up nervously, listens to a whispered voice off-camera, and adds: ‘He’s also handsome and funny. Thank you.’

One commenter in particular, though, did not find the TikTok videos funny at all. 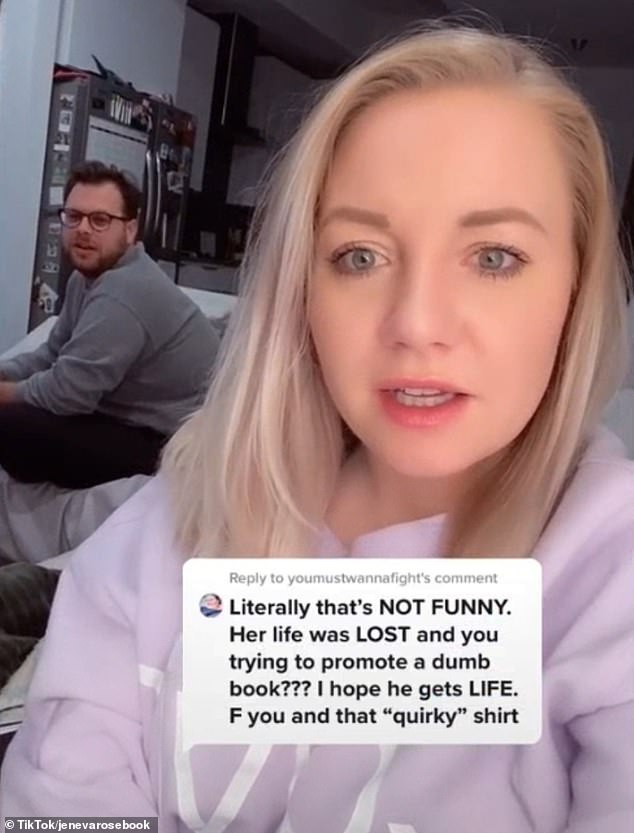 Chill! Jeneva and her husband made yet another book responding to the deranged comment

Funny stuff! Other quicker-witted commenters are applauding the author for her very clever marketing strategy, calling it ‘amazing’

‘Literally that’s NOT FUNNY. Her life was LOST and you trying to promote a dumb book??? I hope he gets life. F you and that quirky shirt,’ the commenter wrote, still mistakenly believing that the book is nonfiction.

Jeneva and Andy have since made another video about the faux-scandal.

‘Drew, they’re coming for you. The internet. They want you to get life in prison,’ Jeneva tells him in one of her most recent clips.

‘Oh, for the murder I didn’t commit from the book you wrote?’ he asks.

Other quicker-witted commenters are applauding the author for her very clever marketing strategy, calling it ‘amazing.’

‘You definitely caught my attention!’ wrote one.

Jeneva’s controversial marketing technique certainly seems to have worked in her favor; she revealed on Twitter on Monday that she sold 11,000 in just four days after posting the viral TikTok video.

‘Between paperback, audiobook, and Kindle, The Perfect Marriage sold over 11,000 copies in 4 days thanks to my viral Tiktok,’ she wrote, before adding: ‘That is absolutely wild!’