A crackdown on real estate agents telling tenants to dip into superannuation to pay their landlords was sparked by a letter to a renter who also happens to be an Australian Securities and Investments Commission staffer.

ASIC on April 3 told the Real Estate Institute of Australia and fair trading and consumer groups across the country to notify agents that advising tenants to consider applying for early release of their retirement funds could land them in prison. 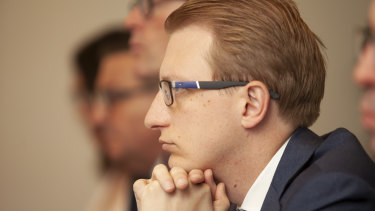 Senator James Paterson queried the regulator about the number of complaints it had received and the basis for sending the letter.Credit:Eamon Gallagher

"Specifically pointing them to and recommending them to consider the specific possibility of accessing superannuation is … likely to amount to a breach of the act," ASIC's letter said in regards to real estate agents.

It has since clarified that agents can inform tenants about the "existence" of the government's scheme – which allows workers suffering financial hardship due to coronavirus to withdraw up to $20,000 of their super – as long as the information isn't presented in a way that implies a recommendation to act.

Liberal senator James Paterson, as chairman of the parliamentary joint committee on corporations and financial services, queried the regulator about the number of complaints it had received and the basis for sending the letter.

ASIC responded to the questions on notice late on Thursday, saying a staff member had received a letter from their own property manager about "applying for the early release of superannuation funds to meet rental payments". There had also been one report of misconduct from a member of the public and ASIC had seen Twitter posts from tenants about this behaviour from late March.

The regulator had since received 70 reports of misconduct from members of the public and was "assessing the information we have received".

"However, if that factual information is presented in a manner that may reasonably be regarded as suggesting or implying a recommendation to withdraw superannuation savings, the real estate agent may be providing unlicensed financial product advice," it said in response to Senator Paterson's query.

Senator Paterson said tenants should make decisions in their own best interests, considering the range of support policies national cabinet had put in place.

"I'm pleased ASIC has clarified agents or anyone else can inform people about the existence of the federal governments early access super policy without offering financial advice," he said.

Disputes are on the increase across the sector as tenants in some areas refuse to pay rent and some landlords decline to offer rent reductions, prompting real estate groups to urge state and territory governments to step in more.

Real Estate Institute of NSW president Leanne Pilkington said current advice was for tenants and landlords to "work it out between themselves" and this had "numerous shortfalls".

"Certainly, there are tenants who are feeling the pinch and for whom rent relief will be necessary should they lose their jobs or have their work scaled back," Ms Pilkington said in a statement.

"Equally, there are landlords – typically mum-and-dad investors who depend on the rental income to repay loans or fund their living expenses in retirement. The plan of transferring the financial burden being experienced by the tenant to the landlord is utterly unjust."

Get our Coronavirus Update newsletter for the day’s crucial developments at a glance, the numbers you need to know and what our readers are saying. Sign up to The Sydney Morning Herald’s newsletter here and The Age’s here.