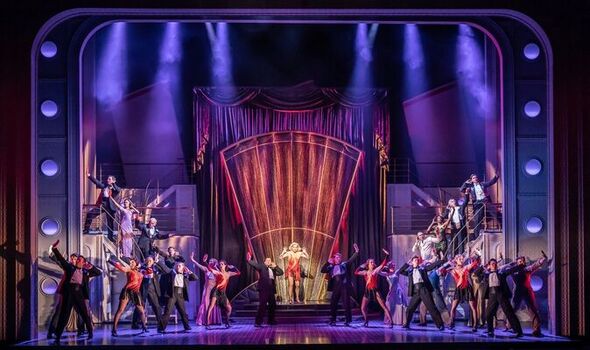 Bonnie Langford saw Anything Goes on its first night at the Barbican last year with Felicity Kendal playing Evangeline Harcourt, Robert Lindsay as Moonface Martin, Gary Wilmot as Elisha Whitney and Broadway star Sutton Foster as nightclub singer Reno Sweeney. ”It was like sitting in a cloud,” she says, “a lovely, fluffy blue sky show.”

The fabulous Cole Porter musical escapade is set on a luxury ocean liner bound for London from New York.

The plot, involving a chanteuse, a gangster and a rather dullwitted toff, zings along from one witty number to another, liberally embellished with fruity double entendres. It was originally intended as an uplifting tonic in 1934, an antidote to the Great Depression in America.

“And isn’t that exactly what we need right now,” says Bonnie, 57, “as we more or less emerge from a pandemic to be confronted by all these terrible things happening in the world?

“I call it a healing show. It’s certainly a feelgood experience for me.”

She speaks from personal experience. Along with Kerry Ellis, Denis Lawson and Simon Callow, Bonnie as Evangeline is part of the new cast. The musical was such a success last time that it has been revived a year later and, following a brief tour, it’s now back at the Barbican with a 30-strong cast and ensemble for a 10-week run.

“It’s round the corner from where I went to school,” smiles Bonnie.

“The first time I walked past, I took a picture – not that the school is there any more. It’s now a block of flats.”

She’s worked with Simon Callow before. “I was Peter Pan to his Captain Hook about 14 years ago. Now, I’ve changed sex and I’m going to end up marrying him. I’ve never worked with Denis but we used to share the same singing teacher.And I do know some of the junior cast members because we worked together on 42nd Street.”

One of the wonderful things about Anything Goes, says its director and choreographer, Kathleen Marshall, is that it’s personality-driven. “The characters are so vivid that every cast puts their own unique stamp on it,” she explains.

“It’s why I insisted on a four-week rehearsal period, just the same as when we did the show last year. We started from scratch and built it up from the ground again.

“Yes, some of the company are the same but I saw this as very much a new production. And yes, the wonderful Cole Porter score and the choreography obviously provided a blueprint for this new version. 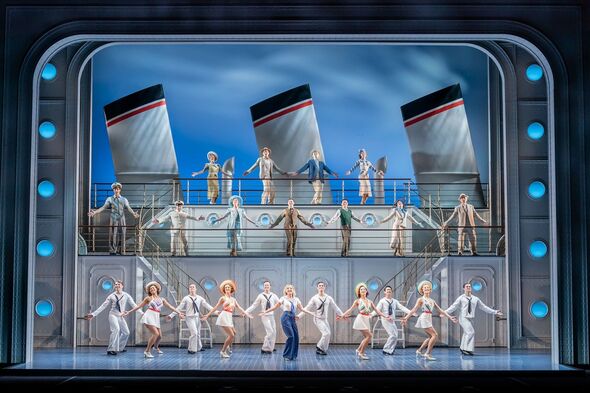 “But I cast four strong musical theatre actors and allowed them to bring their own interpretation to the roles.”

Now that this new version is bedded in at the Barbican, does Kathleen, 59, have new favourite moments in the show?

“Oh, for sure. Simon Callow getting down with some care to propose on two occasions makes me smile every time.

“And I love Bonnie’s unique musicality and the way she has ownership of Evangeline every moment she’s on stage.

“I like the way Kerry doesn’t come out of the gates at 100 miles an hour. She calibrates Reno beautifully, allowing the songs to build and establish their own sense of discovery. As for Denis, he’s a bundle of energy, constantly in motion, and blessed with peerless comic timing.”

Simon Callow needs little prompting to enthuse about this production of Anything Goes. “It’s a joyfest!As soon as I was offered the opportunity of playing ElishaWhitney, I jumped at it. I’d seen it the year before and, like everybody, I’d adored it,” he says.

Did he have to banish the original version out of his mind?

“Not the show, no. But I did have to cast Gary Wilmot’s performance in the same role out of my mind. I hoped I’d be able to make a small contribution of my own to this particularly brilliant rendition.

“I’ve come to rather love Elisha, an eccentric and, as somebody described him, gloriously functioning alcoholic. Here is a man who falls in love with Evangeline Harcourt in the delicious figure of Bonnie Langford.”

Simon, 73, also has lovely memories of playing Captain Hook to Bonnie’s Peter Pan in Richmond one Christmas. “As I said at the time, she was much more terrifying than me,” he chuckles.

For veteran actor and one of the stars of the original Star Wars saga Denis Lawson, 74, who plays “second-rate” gangster

Moonface Martin, Anything Goes was like coming home. “When I was four or five years old, I’d be taken to the movies in Crieff, the small town where I grew up in Scotland,” says the suave star. “The people I admired were Danny Kaye, Gene Kelly and Fred Astaire. They are what made me determined to become an actor. I was also very influenced by Scottish variety, the last knockings of music hall.

“I’m glad to say I didn’t see last year’s production of Anything Goes. I’m a bit of a sponge and it would have been hard to eradicate that from my brain in general and Robert Lindsay’s performance as Moonface Martin in particular.

“It meant I could come at it with a fresh eye. It’s been a real tonic, a pick-me-up. I’m absolutely relishing it.”

Had he ever worked with any of the new star cast members before?

“Yes, Simon Callow and I go all the way back to 1974 and a play upstairs at the Royal Court written by John Antrobus who also wrote for The Goons. I’ve worked with Simon in the theatre and on TV since.”

Musicals have played quite an important part of his career. He was in Mr Cinders, La Cage aux Folles, Pal Joey and an early production of the counterculture musical Hair in Amsterdam. Did he have to take all his clothes off? “Richard, I insisted.”

Kerry Ellis, 43, is having the time of her life. “It’s such a happy show,” she says. “To get people on their feet each night is pure joy. I saw it last year and I’d forgotten how many fabulous songs – all of them standards – were in it. I couldn’t wait to be a part of it.

“Initially, though, I wondered whether I’d be up for all the dancing. I don’t think I’d put on a pair of tap shoes for over 20 years. I’d been in musicals before – from My Fair Lady to Miss Saigon and Les Mis, from Wicked to Cats and Rent – but this was a new challenge: singing, dancing and acting.

“I think it helped going on tour before we began this final season at the Barbican. It means that, as a company, we’ve become a tight family unit.

“Kathleen stressed from the start that this was a new production, that no one was stepping into anyone’s shoes. Having said that, there was a level of expectation because the show was so successful last time round. So that was a little daunting.

“But the five-city tour soon proved there was nothing to worry about: there was a lot of love out there for this show. One of the reviews I read said that Anything Goes should be prescribed on the NHS because it delivers the feelgood factor in spades.

And don’t we need that right now?”

So, would Kathleen anticipate people who saw Anything Goes last year booking again for this season?

“Absolutely. It’s still the show they knew and loved last summer but with a fresh coat of paint on it.”

For tickets and information, visit anythinggoesmusical.co.uk