The absence of Prime Minister Scott Morrison at the upcoming COP26 climate talks would be significant, even though Australian leaders do not attend each of the annual summits.

“We haven’t made any final decisions about [attending COP26]. I mean it is another trip overseas and I’ve been on several this year and spent a lot of time in quarantine,” Morrison told The West Australian newspaper. 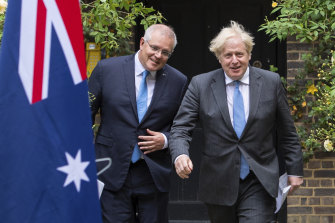 “I have to focus on things here and with COVID. Australia will be opening up around that time, there will be a lot of issues to manage and I have to manage those competing demands.”

Energy and Emissions Reduction Minister Angus Taylor has confirmed he will attend, but not Foreign Minister Marise Payne.

“One thing we are absolutely committed to is setting out our long-term emissions reduction plan prior to the COP and that is what we are focused on as a government.”

This is true, but the importance of COP26 to the world, and to Australia’s key allies cannot be overstated.

The talks are seen as the last chance for the world to come to an agreement on emission reductions that may put it on track to hold warming to 1.5 degrees, after which scientists fear tipping points may be triggered that could lead to the climate spiralling out of control.

At present about 100 world leaders are expected to attend the talks, and the schedule has been structured specifically to make it easier for leaders of major economies to do so.

COP26 co-hosts Italy have scheduled G20 talks to be held in Rome on October 30 and 31 specifically so that leaders can fly directly to Glasgow for the start of the conference.

In Glasgow, the British government is hosting leaders’ meetings on November 1 and 2 to bookend the Rome talks.

Britain and the United States, Australia’s allies in the new AUKUS security pact, have both made it clear that they consider success at COP26 to be a top priority.

“In just 40 days’ time, we need the world to come to Glasgow to make the commitments [to keep warming to 1.5 degrees],” he said.

COP meetings – the acronym stands for Conference of Parties, referring to signatories of the UN’s climate treaty – are held annually and are not normally attended by the majority of world leaders.

But leaders do normally attend those meetings at which key negotiations over national emissions targets are to take place.

Former Australian prime minister Kevin Rudd attended talks in Bali in 2007 to recommit Australia to the Kyoto Protocol and the Copenhagen summit in December 2009 where a new level of global ambition was agreed upon.

Former prime minister Malcolm Turnbull travelled to France in 2015 to commit Australia to a climate treaty that became the Paris Agreement and to lock in Australia’s goal of reductions fo 26 to 28 per cent of emissions.

At this year’s meeting, nations are expected to update those contributions.