The school captain from one of Melbourne’s fancier schools wanted to shake the prime minister’s hand, but he also had a message for politicians that young people need more help.

Daniel Gao, whose mother is campaigning for Chisholm Liberal MP Gladys Liu, wore his Caulfield Grammar uniform as he met Scott Morrison at a packed campaign event in Melbourne’s east. 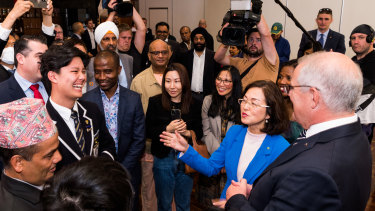 Gao is the co-founder of mental health charity Hold My Hand, created before the pandemic, that seeks to create peer support networks for young people navigating mental health difficulties. He said it was great the government was allocating more money to youth mental health, referencing the $503 million committed in 2019.

“It’s just, there’s some aspects the government needs [to give] more attention to make these projects more meaningful to people,” Gao said, adding politicians were too often preoccupied with figures.

“But I think the right mindset is ‘there’s always more people to help’, and especially with the youth, there’s currently a lack of statistics on how many this has affected. I know a bit about it, not many people are willing to disclose that they are going through some of these conditions.”

The prime minister, Housing Minister Michael Sukkar, and Liu campaigned at the Whitehorse Club in Melbourne’s east, where Melburnians of many cultural and religious backgrounds gathered.

The Prime Minister repeated an analogy he had used the day before in front of hundreds of members of Sydney’s Muslim community. “I like to think of Australia … as a very strong cord, an incredibly strong cord with all the strands woven together,” he said.

“It might be a struggle, but when they are all woven together, cohesively, together, into one community, separate and different, but also together, it makes Australia incredibly strong.”

Morrison’s messaging has carried an undertone of unity so far through the second half of the campaign, kicking it off with a visit to a youth mental health service, to which he promised funding.

He said while funding professional resources was vital, more emphasis needed to be given to strengthen peer support for people who weren’t able or willing to seek professional help. 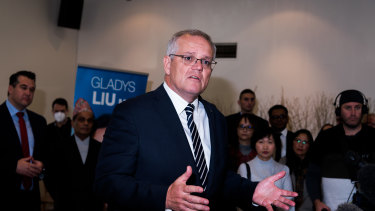 Morrison spruiked a message of inclusion to a multicultural audience in the Melbourne seat of Chisholm on Tuesday.Credit:James Brickwood

“I really want to, through some of my work with these politicians, to make sure that that’s brought to light.”

The prime minister’s “great mission” is to protect Australia’s youth from the mental harms of social media, a message splintered by his support for Katherine Deves, a candidate who has a history of divisive posts about trans people competing in women’s sport.

Asked about the participation of trans youth in sport, Gao had this to say about opportunities afforded in a country as privileged as Australia: “We should be obviously trying to make it as equal as possible to all people.”

Cut through the noise of the federal election campaign with news, views and expert analysis from Jacqueline Maley. Sign up to our Australia Votes 2022 newsletter here.