On Sunday nights before Parliament sits, Anthony Albanese’s leadership group, plus senior portfolio holders and tacticians, gather in his office for dinner.

They are an eclectic bunch – different factions, life experiences and dietary requirements. Katy Gallagher is vegetarian, Mark Butler is vegan, Kristina Keneally is ketogenic, Tony Burke is coeliac, so food is a mixture of takeaway and bring your own. 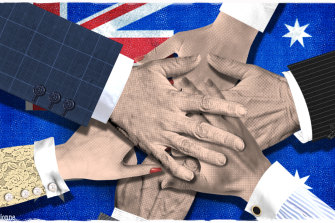 The point of the gatherings is to talk about the week ahead and to toss around ideas.Credit:Illustration by Dionne Gain

The point of the gatherings, as Albanese keeps reminding them, is not to lock in decisions on issues – because that is done by shadow cabinet and caucus – but to talk about the week ahead and to toss around ideas. It can get willing. Albanese, said to be an active participant in “robust” discussions, seldom objects so long as it is respectful and constructive.

What those dinners have done, as well as provide insights into Albanese’s management style, is strengthen the bonds and increase the trust between his frontbenchers and with him. It has also built unity.

Gallagher is finance shadow minister and the opposition’s manager of senate business. She and the shadow treasurer, Jim Chalmers are tight as. Gallagher, who will be Labor’s campaign spokesperson in Canberra (Jason Clare will fill the role in Sydney), is also besties with Keneally, the deputy senate opposition leader and home affairs shadow, and Penny Wong, Senate Opposition Leader and shadow foreign minister. After they bought her trendy designer sneakers for her birthday, Wong called them her “Senate sisters”.

They not only know their stuff, like other Labor frontbench women such as Tanya Plibersek and Catherine King, they are relentless warriors for the cause.

Keneally, who is moving to the lower house, is a fearless, razzle-dazzle performer, used to the limelight, used to navigating her way through tough interviews. She riles her opponents, but she is a key part of Albanese’s national security team.

Wong, who has been absent for some weeks for medical reasons, returned to work 10 days ago. A frontbench colleague of Wong’s, not especially close to her, was effusive in his praise of her performance on ABC’s Insiders last Sunday, saying it was the best interview any of them had done on the program. Including himself. It was a big call, but this fanboy enthused she had conveyed three prized political attributes: confidence, competence and a safe pair of hands. Another said she was the glue which held them all together.

Importantly, close to a million viewers across several platforms watched David Speers put her through her paces. Wong did not falter in her defence of the opposition’s positioning on China, the Russian invasion of Ukraine and national security generally, nor in nudging where the government might go next on sanctions. Her critique of the government’s record on defence capability and Australia’s self-sufficiency gaps was persuasive. 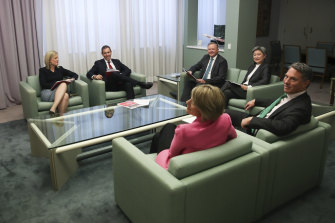 The presidential nature of election campaigns means the composition of a leader’s frontbench tends not to change many votes. However, in a tight election at a time of great uncertainty it can influence the outcome.

In a world and a country consumed by the catastrophes of war, floods, fires and plague, people want to be reassured that the leader is not flying on ego alone and that a competent team exists to help carry the load or execute the orders. Albanese can confidently assert that. Up to a point.

Within the confines of Scott Morrison’s command-and-control operational style, Josh Frydenberg and Peter Dutton have managed to help bolster his standing, as well as their own, in the two areas indispensable for success for the Liberals. Places where Labor has to make inroads.

Frydenberg is a loyal deputy who burnishes the Coalition’s reputation on economic management. Dutton has given defence greater prominence at a critical time while maintaining cred with conservatives. 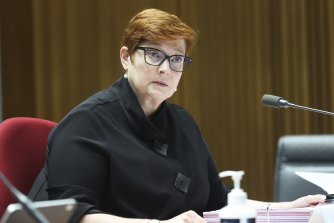 After that it slides. Marise Payne should have provided more ballast in foreign affairs, instead she risks being overshadowed by her shadow. Impressive when she gets out, she hasn’t been out anywhere near enough. Simon Birmingham often picks up the slack. Greg Hunt has performed commendably in health, but so far Morrison has neglected to nominate his replacement.

Angus Taylor, still seen by some Liberals and by himself as a potential future leader if the unthinkable happens and Dutton and Frydenberg both lose their seats, was damaged early personally by scandal. He has barely recovered, not that the Coalition wants to talk about climate change.

Michaelia Cash, who took over as Attorney-General from Christian Porter, a slot which permeates every area of government activity, is even more media-shy than Payne, leaving carriage of sensitive issues like religious discrimination to her junior, Amanda Stoker. Alan Tudge remains in limbo-land as does education, following allegations, which he denies, of abusive behaviour from his former staffer, Rachelle Miller.

But back to Albanese’s frontbench which has one serious gap which needs to be filled.

When Richard Marles opted to leave defence, it was not the powerhouse portfolio it has become thanks to Dutton’s profile and a changed geopolitical environment. Until recently it was considered a resting place for politicians on the way out. No longer.

As deputy, Marles can choose his portfolio. He should resume defence, and give his current, cobbled together role of National Reconstruction, Employment, Skills, Small Business and Science to Brendan O’Connor who has it now, or back to Chalmers. There are whispers it will become prominent once the opposition begins to allocate money from its $15 billion national reconstruction fund, but even so that will not have the lasting or even immediate impact that defence can deliver in the right hands.

Although Marles has been mentioned as a possible future leadership contender – assuming Albanese loses – his chances are between slim and zero. Marles is so nice even Dutton says he likes him, putting it on the record with Peter FitzSimons only days before Morrison called Marles the “Manchurian candidate”.

He is close to a perfect deputy, respected by colleagues, while not seriously regarded as a threat to the leader. The kind who could be trusted to mind the shop in the leader’s absence without wrecking it or embarrassing himself and the country. Hello Barnaby.