There was no Powderfinger, the reunion the host city most wanted to see, but the first AFL grand final to be played in Queensland did get one of the band's best songs, These Days, performed pre-match by fellow Bris-band Cub Sport.

Though it was written by Bernard Fanning 21 years ago for Gregor Jordan's crime movie Two Hands, the song could have been penned specifically for this most crapful of years. 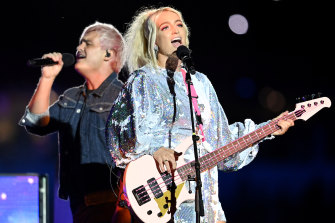 "This life, well it's slipping right through my hands," sang Cub Sport frontman Tim Nelson, who first performed it as a 12-year-old for his friend's parents at a sleepover. "These days turned out nothing like I had planned."

Well, he should know: had it not been for the pandemic, Nelson and his bandmates would have been touring the US right now.

International travel restrictions meant this was always going to be an all-Australian bill, with no room for a Meatloaf this year. So that's one thing we should thank COVID for at least.

Brisbane outfit Sheppard got the big slot, playing the first half-time grand final show since 2012, and the only one ever performed under a night sky, with lights, fireworks and a field full of dancers wielding glowing balls to bring a genuine sense of spectacle to the occasion.

This was no Superbowl though; despite the lead billing, the Sheppard siblings — George and Amy on vocals, Emma on bass — and their bandmates had time for just two songs: Coming Home, introduced by George as "a song about Brisbane, for Brisbane" — and Geronimo, their worldwide smash from 2014. 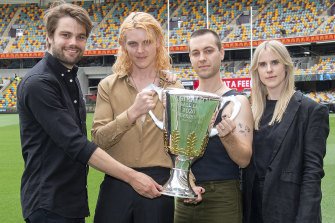 The band's stock-in-trade is big singalong anthems with irresistible oh-oh-oh hooks, and with the added extras of the Queensland Symphony Orchestra and massed ranks of drummers it made for a big, big sound.

From the off, the AFL's commitment to diversity was evident, with a welcome to country that included a giant coo-ee to Melbourne followed by Indigenous artists Thelma Plum, Zaachariaha Fielding (of Electric Fields) and Jeremy Marou (half of the Busby Marou duo) joining forces on a cover of Paul Kelly's From Little Things Big Things Grow.

Next was Up There Cazaly, with didgeridoo player Ron Murray alongside Mike Brady at the MCG, while Malaysian-born Chong Lim conducted the QSO in Brisbane. It was the most epic version of the ad jingle ever performed, but there was something inescapably sad about the sight of Brady singing "the crowd's on your side" in an empty 'G. 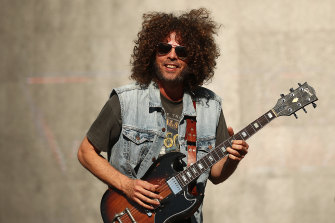 After Cub Sport's synth-pop and vaguely churchy take on These Days, Sydney's DMAs got two songs, starting with an almost-unplugged cover of Cher's Believe, the song they did for Triple J's Like A Version in 2016 and which ended up at number 6 in that year's Hottest 100, followed by their most recent single, Criminals. Thomas O'Dell's vocals were sweet but a little low-key, and in danger of being washed away by the rain that fell heavily before the game.

It was left to Wolfmother's Andrew Stockdale to bring the bombast, his Joker and The Thief getting the full lights, fireworks and QSO accompaniment. It was a little overblown, but a welcome tempo lifter ahead of the national anthem, sung by Tim McCallum, and the actual hostilities.

In all, the night-time experiment made the entertainment more spectacular. And with so much of it on display, it was a bit of miracle there was any room left for the footy.

Yes, it was all a little disjointed. But for a nation that's been starved of live music since March, to see and hear it played live, in front of thousands of people in the stadium and millions more at home, it was a balm, and a blessing.