A man accused of raping and choking women he met on the dating app Tinder has been released on bail despite a court hearing he continued to seek out women for sex during Melbourne’s COVID-19 lockdown.

Brett Taylor, 25, launched a Supreme Court bid for bail last week after being arrested and charged late last month with the rape and assault of two women, aged 18 and 19, in October 2018 and March this year.

On Wednesday, the Supreme Court heard the computer science student was unlikely to face trial until the early part of 2022 due to COVID-19, which was also making his time in custody particularly onerous. 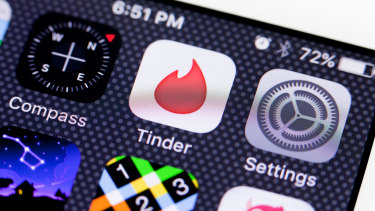 The accused attacker met his two alleged victims via Tinder.Credit:Alamy

Crown prosecutor Brett Sonnet argued the 25-year-old man from Berwick in Melbourne's south-east posed a risk to the public and had continued using dating sites, in particular Tinder, to contact young women for sex even while COVID-19 restrictions were in place.

Mr Sonnet said during Mr Taylor's interviews with police, he also admitted to coming into contact with "hundreds" of women on the dating app.

But defence barrister Pardeep Tiwana said he was confident the case would go to trial and argued his client had cooperated fully with police and admitted the sexual activity took place.

He said Mr Taylor has no criminal history and the support of his mother.

In granting Mr Taylor bail, Justice Paul Coghlan said it was a difficult case, but prisoners currently faced visitor restrictions and the increased possibility of lockdown due to COVID-19.

He also said it was unlikely a trial would begin before the early part of 2022.

"[The prosecution] emphasised in this case that the offending was particularly serious and designed in part to humiliate the young women involved and involving the use of force while engaging in sexual intercourse in a way which was particularly intimidating for the complainants," Mr Coghlan said.

"It's put on the applicants behalf that the conduct was … consensual."

The court has previously heard the first alleged rape occurred in 2018 after a 19-year-old woman matched with the man on Tinder.

On October 25, 2018, Mr Taylor met the woman for dinner in Drouin before driving her to an isolated area where a sexual assault allegedly occurred.

Then, in early 2020, an 18-year-old woman matched with Mr Taylor on the same dating app.

On March 24, she invited Mr Taylor to a house party she was hosting with friends at a campus share house in Burwood.

Police allege Mr Taylor followed the woman into her bedroom, sexually assaulted her and choked her as she fell in and out of consciousness.

On both occasions, the victims reported being choked and unable to breathe, as well as being forced onto their stomachs.

Sex crime squad police later arrested Mr Taylor at his mother's home in March and again in July where he was charged with four counts of rape and four counts of assault and remanded in custody.

As part of his bail conditions, Mr Taylor must reside with his mother at their family home in Berwick, remain inside the house between 9pm and 6am daily, report to Narre Warren police station three times a week, surrender his passport and avoid contact with witnesses for the prosecution.

He is also prevented from using online dating applications including Tinder.

Mr Taylor is due to face Melbourne Magistrates Court on October 23.