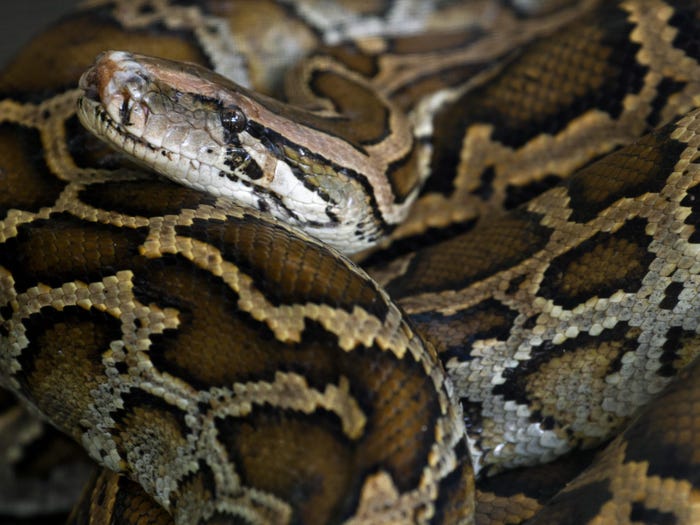 Burmese python eggs are an unconventional choice of ingredient, but one Florida hunter used them as an unexpected ingredient for a classic holiday treat.

Donna Kalil, a veteran python hunter in South Florida, prepared for Christmas with a batch of serpent-themed Christmas cookies.

"Heading out to hunt tomorrow with some fresh rocky road & chocolate almond python egg cookies," Kalil wrote on Instagram, where photos of her culinary creations are intermingled with hulking reptiles.

Kalil told the Miami Herald that she freezes the python eggs before incorporating them into her batter.

"It's a great source of protein, so if we can find a safe way to use the whole animal and not just the skin, it might encourage more people to get involved in saving the Everglades," Kalil told the Miami Herald.

When she's fortunate enough to find an egg-bearing female snake during her hunting sessions, the Miami Herald reports that Kalil removes the eggs before cooking them hard-boiled with Sriracha sauce or into frittatas.

Kalil also created meals and snacks out of python meat – dubbed the "chicken of the glades" by locals – in a variety of ways.

"I really like making jerky because it's a great snack, but the meat is also good for pasta sauce and sliders, especially when mixed with some other meat like hog," Kalil, who eats the jerky to fuel her 10-hour hunting sessions, told Miami Herald.

Pressure cooking the python meat, then adding it to pasta sauce or sautees are among Kalil's favorite food tricks.

Burmese pythons are an invasive species in South Florida, where officials hope to add it to the menu.

Burmese pythons began popping up in South Florida and the Everglades during the 1980s after pet owners became overwhelmed by the massive reptiles. Pythons quickly adapted to the wet, marshy ecosystem and emerged as a major predator.

In addition to the ongoing elimination program, Florida officials have paid python hunters to capture the species and reduce the population.

Consumption of python has been promoted as one way to inspire others to get involved in the hunting process and help curb the species' population growth.

"We would like to use consumption as another way to encourage people to remove pythons in Florida if the meat is safe to eat," Carli Segelson, a spokesperson for the Florida Fish and Wildlife Conservation Commission,  told Sun Sentinel.

But the Everglades has high mercury levels and people should be cautious with consumption, according to the Florida Fish and WildlifeConservation Commission and 2020 South Florida Enviromental Report.

Kalil told Miami Herald that she doesn't eat python daily because it's still uncertain how much mercury has contaminated the snakes.

The Everglades, with miles of water, can accumulate mercury that builds up in fish, shellfish, and animals that eat fish.

The Miami Herald reports that the larger the snake, the more mercury it likely contains – which can be significant given Burmese pythons can grow 23 feet long and 200lbs, National Geographic reports.

Kalil told Miami Herald that she only cooks small snakes that measure under six feet and has a home testing kit to determine mercury levels.