Sydney’s Inspired Dance Film Festival 2021 has again drawn entries from around the world. The finalists, screened as a gala in a cinema and now available online, reflect the festival’s fascinating range of themes, approaches and styles.

It was interesting to see the emphasis put on locations totally unlike anything you could find in a theatre – often a challenge to the performers and sometimes more about the background than the dancers in the foreground. 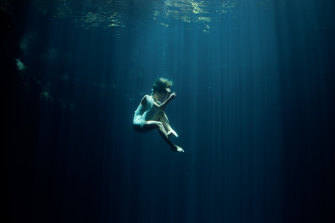 Out of Breath, a prizewinner from Korea, manages a good balance, convincingly done as dance and film. Its theme of escaping a relationship features a violent encounter in creepy underground drains and aboveground abandoned buildings, scary for its realism.

An Australian prizewinner, Sue Healey’s Live Action Relay – reviewed here individually when it was first livestreamed – brings together a slice of dramatic local coastline and bold dancers exploring rocks, sand and sea in a gentler way.

Lotus, from France, dives deep literally – underwater in a Mayan cave – as well as crawling over a dry lake bed in an effort, the makers say, to reconnect the soul. 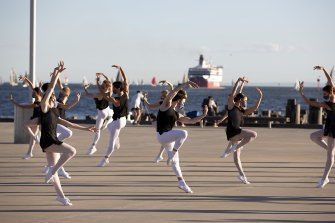 Murmuring takes over a Melbourne dock.Credit:

Murmuring, which features dancers from the Australian Ballet and graduates from its school, takes over a dock on the Melbourne waterfront to dance in synchronised ensembles. Their theme springs from the flight of starlings and their care of the vulnerable in a flock, just as human communities have done in the pandemic. It is good to look at and think about.

Still Life, a trio of short films by the Australasian Dance Collective, based in Brisbane, and Kiosk Film, was named Best of the Fest. Watching it online, I felt its vigorous dance and fast edits would have looked better on a big screen, perhaps even as the stage performances that were said to inspire it. But congratulations!

A haunting version of Transfigured Night, from Ballett Dortmund, was a rare recording in this lineup of a staged performance. It is so cleverly lit and directed that every detail of the dancers’ meaningful movements are clearly delineated in the moody darkness – and it was another prizewinner.

Several more films from the finals lineup and the rest of the entries can be found online the website until November 21.

There will also be cinema showings in Melbourne, Brisbane, Byron Bay and Canberra on December 5.

The Booklist is a weekly newsletter for book lovers from books editor Jason Steger. Get it delivered every Friday.